UK farmers are set to become the first in the world to access a new fungicide for the control of Septoria in cereal crops.

A long-awaited new wheat fungicide, which will help tackle disease resistance building up against pesticides, will be available this season for UK growers after its registration approval.

The newly named Univoq from agrochemical giant Corteva Agriscience will contain the group’s new active Inatreq, with a different site of action to other fungicides, mixed with the widely-used azole prothioconazole.

The launch will give UK wheat growers a third group of fungicides, along with azoles and SDHIs, which have systemic action against wheat’s most yield damaging disease, septoria.

It will be the first product in the 15 years since the first SDHIs hit the market to offer a new target site for septoria control and will allow growers to mix and alternate fungicides and so counter-resistance.

Fenpicoxamid (Inatreq™ active) possesses these characteristics and is a member of a novel picolinamide class of fungicides derived from the antifungal natural product UK‐2A. Fenpicoxamid is a new fungicide active ingredient that was identified and developed by semi‐synthetic modification of the naturally occurring antifungal compound UK‐2A.

It is strongly active against Z. tritici, as evidenced in both greenhouse testing and extensive field trials in Europe, and thus has an excellent fit for use in the cereals markets.

Unlike UK‐2A, fenpicoxamid has excellent stability on leaf surfaces such that residual protection is a key strength, although it is also efficacious against latent infections present in leaves at the time of application.

This chemistry delivers a novel mode of action for the cereals fungicide market, involving inhibition of the mitochondrial respiratory bc1 complex at the Qi binding site, which is distinct from the Qo site to which the strobilurins bind.

Inatreq™ active is the first member of a new class of cereal fungicides, the picolinamides. Inatreq is a Quinone Inside Inhibitor (QiI), expected FRAC MoA group C4 #21 (will be assigned in 2016/17). It inhibits mitochondrial respiration in fungi by blocking electron transfer in the respiratory chain, and binds to complex III (the bc1 complex) at the Qi site (the inner mitochondrial membrane).

Inatreq will offer a new solution for control of Septoria tritici where resistance to other chemistries (e.g. strobilurins and triazoles) is a concern. Inatreq shows good crop safety and disease control which can result in significant yield benefit. Inatreq is best used as a protectant treatment or in the earliest stages of disease development.

Inhibition of fungal mitochondrial respiration results in a reduction in the amount of ATP (Adenosintriphosphate) produced. As ATP is the main chemical energy carrier that drives the vital functions of cells, key biochemical processes are disrupted, growth is inhibited and the fungus dies. In-vitro studies have shown that Inatreq is a potent inhibitor of spore germination and will also inhibit mycelial growth post-germination thus explaining the outstanding protectant and strong curative properties observed when applied pre- or post-infection. 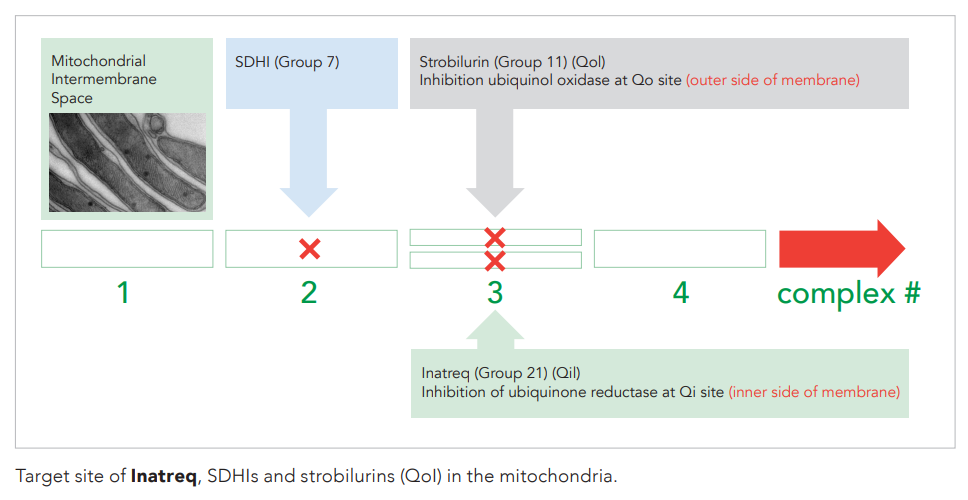 Fenpicoxamid, therefore, provides excellent control of fungal isolates resistant to strobilurins and also to other classes of chemistry, such as azoles, thus offering the grower a powerful new tool for resistance management.

The supporting information shows that, while toxicity to non‐target organisms in the environment is generally very low, fenpicoxamid has significant toxicity to some aquatic organisms such as fish, similar to other fungicides that inhibit respiration. However, extensive risk mitigation measures are available in Europe allowing environmentally safe usage of fenpicoxamid.

The new molecule is derived from a natural compound, UK-2A, produced through fermentation and converted to Inatreq through a single step modification after fermentation to enhance stability and offer long term protection.

Inatreq is converted back to UK-2A both inside plants and in the presence of fungi. It binds to the quinone inside inhibitor in the fungal pathogen – a different site to all other cereal fungicides on the market, giving it a unique site of action.

Outstanding control of Septoria will be noted by farmers and advisors as Inatreq’s key attribute. But the list of qualities is long.

The fungicide will be available in time for T2 flag leaf application in winter wheat in late May, and the UK green light follows approvals for use in cereals in France, Belgium, Luxembourg, Ireland and Greece.

William Corrigan, the group’s UK & Ireland country leader, says it is a major launch for the company, which was formed from the agriculture divisions of Dow and DuPont in 2019.

“This is the first new cereal fungicide from our pipeline and a clear signal of our intention to deliver the best chemistry to our customers, helping farms to deliver their goals of being profitable and sustainable for the future,” he says.

Inatreq’s chemical name is fenpicoxamid, and it is from the picolinamide chemical group, which have not been used before as fungicides in cereals. It is a systemic fungicide like azoles and SDHIs, meaning it moves through leaves to cure disease.

As Inatreq works at a unique target site in the disease fungus, and demonstrates no cross-resistance to other fungicides, this should allow growers to achieve good levels of disease control.

“The Inatreq active molecule works differently than every other cereal fungicide available to farmers in the UK,” he says. “Over the past decade of development, it has demonstrated the ability to keep crops greener for longer, allowing plants to fulfil their yield potential.”

UK company trials have also shown control of yellow and brown rust in line with existing market standards, and the product delivers a good period of protection, maintaining green leaf area and allowing the crop to build yield long after application.

The group had hoped to launch the product in 2020, but the Chemicals Regulation Division (CRD) of the Health and Safety Executive requested additional information before product approval.

The label rate for the new product is two litres/ha but the general recommendation will be for use at 1.25 litres/ha. No pricing details have been released, but it is likely to be priced at a similar level to last season’s new cereal fungicide Revystar from BASF, which was a mix of the group’s existing SDHI fluxapyroxad and its new azole mefentrifluconazole.

New formulation chemistry has been developed to maximize the biological efficacy of the active
ingredient. Inatreq will be offered in a range of formulation concepts to meet the various market
needs of cereal growers.

Depending on the geography or premix combination, it will be offered as liquid formulations.

[…] BELGRADE, Serbia – December 7, 2021 – Corteva Agriscience announced today that Serbia has approved the registration of a product with Inatreq™ active. […]