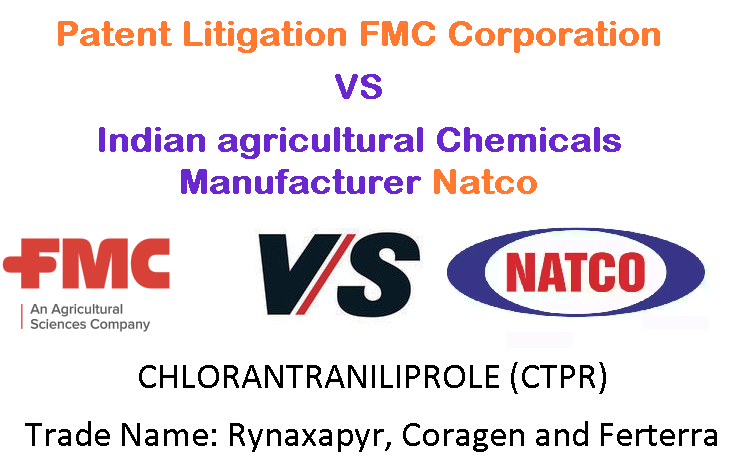 Natco Pharma is an Indian multinational pharmaceutical company, now forayed into the agrochemical space with products across a broad range of crops with NATCO Crop Health Sciences.

In February 2021, Natco Pharma had received registration approval from Central Insecticide Board & Registration Committee for Chlorantraniliprole, an active ingredient used in pest management products. Natco would be the first indigenous manufacturer of this technical product, the company had said.

CTPR is an active ingredient used in products commercialised by FMC under their brands Coragen and Ferterra. The sales generated from CTPR containing products in India, inclusive of third-party marketing companies, as per the declaration given by FMC was estimated to be Rs 1,540 crore in 2016. Natco believes the current market size to be over Rs 2,000 crore. It had filed a suit against FMC for a declaration of freedom to use CTPR.

Rynaxypyr is currently one of the bestselling and most effective active ingredients used for fighting chewing pests. It is patent-protected until 2022.

FMC filed the lawsuit against Natco at the Delhi High Court in October 2019 for potential patent infringement of certain Indian patents covering chlorantraniliprole. FMC sells chlorantraniliprole in India under the trade name Rynaxapyr® active, which is the primary ingredient in Coragen® and Ferterra® insecticides.

Coragen® and Ferterra® insecticides are approved for controlling pests on rice, sugarcane, vegetables, maize as well as other important crops. These insecticides and their patented active ingredients are well known by farmers and recognized for their favorable safety and environmental profile, which has earned them a green label from India’s regulatory body.

“FMC Corporation invests heavily in research and development to bring new innovations to farmers throughout India and around the world. We are deeply committed to ensuring farmers use genuine crop protection products from legitimate sources,” said Michael Reilly, executive vice president, general counsel and secretary of FMC. “We will pursue all appropriate measures as permitted under Indian laws to aggressively defend FMC’s intellectual property and safeguard farmers’ interests.”

For more than three decades, FMC has provided India proprietary insect, disease and weed control technologies to ensure that India’s farmers have access to world-class product technologies, in support of the country’s aspiration to be the world’s leading agricultural producer. The company employs more than 600 people in India and operates six facilities throughout the country including an Innovation Center in Hyderabad.

Rynaxypyr is currently one of the bestselling and most effective active ingredients used for fighting chewing pests. It is patent-protected until 2022.

FMC Corporation is a global agricultural sciences company dedicated to helping growers produce food, feed, fiber and fuel for an expanding world population while adapting to a changing environment. FMC’s innovative crop protection solutions – including biologicals, crop nutrition, digital and precision agriculture – enable growers, crop advisers and turf and pest management professionals to address their toughest challenges economically without compromising safety or the environment. With approximately 6,400 employees at more than 100 sites worldwide, FMC is committed to discovering new herbicide, insecticide and fungicide active ingredients, product formulations and pioneering technologies that are consistently better for the planet.