Commerce and Industry Minister Piyush Goyal on Tuesday announced to provide 80 percent fee reduction to all recognized educational institutions applying for patents, whether in India or abroad. He said the 80 percent fee reduction was earlier available to all recognized educational institutions which are owned by the government.

” I think it’s quite unfair that this is restricted only to innovation coming out of government institutions. “This 80 percent fee reduction will now apply to all recognized educational institutions whether it is the government (owned), government-aided, or private institutions, irrespective of whether these institutions are situated in India or anywhere in the world,” he said at a CII webinar on intellectual property.

He added that all recognized educational institutions, universities, schools, and colleges would now enjoy the benefit of an 80 percent fee reduction. Now, this will mean the total fee for filing publication and renewal for an institute will reduce from about Rs 4,24,500 to Rs 85,000, which is a reduction of 80 percent.

” I think this will be a great encouragement for universities and I do hope to see lots and lots of new universities and educational institutions participating in this. ” I am given to understand that this will now become the lowest fee among the top Patent Offices worldwide. I would encourage all universities both in India and abroad to take the benefit of this,” Goyal added.

He asked the Department for Promotion of Industry and Internal Trade (DPIIT) to start the process of approval of this announcement. On the suggestion 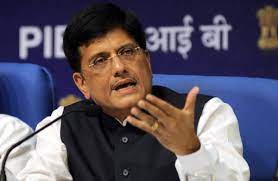 of using IPR as collateral for financial institutions and bank finance, the minister said that the matter can be taken up with the finance ministry.

Industry body CII can make a presentation to the finance ministry to consider this idea and” I would urge DPIIT and CII to work with the department of banking to take that idea forward,” he added. Further, the minister suggested DPIIT work out modalities on introducing scholarships for 75 students studying law related to the IP ecosystem and who come from economically weaker sections.

” We must set a target of spreading awareness about IPR (intellectual property rights) among a million students in the next 52 weeks. And, then we can consider including it in the curriculum,” he said. He also said the ministry would like to improve India’s ranking in the Global Innovation Index from 48 to among the top 25.

” Time of patent examination has also been reduced from 72 months in December 2016 to 12-24 months in December 2020. We’re also assessing how to compress this time further,” he said. The minister also suggested anonymizing patent applications, so that there is complete transparency in the process.

Chlorpyrifos: US Govt. Banning Pesticide After an Order By The Ninth Circuit Court of Appeals

Placebo effect accounts for more than two-thirds of...