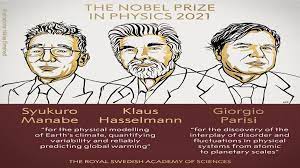 Awarded  for work in physical modelling of Earth’s climate, quantifying variability and reliably predicting global warming.
Demonstrated how increases in the amount of carbon dioxide in the atmosphere would increase global temperatures, laying the foundations for current climate models.

Awarded for “the discovery of the interplay of disorder and  fluctuations in physical systems from atomic to planetary scales.”
He “built a deep physical and mathematical model” that made it possible to understand complex systems in fields such as mathematics, biology, neuroscience and machine learning.

The three Laureates shares this years Nobel prize in Physics 2021 which was awarded “for groundbreaking contributions to our understanding of complex systems” with one half jointly to Syukuro Manabe and Klaus Hasselmann “for the physical modelling of Earth’s climate, quantifying variability and reliably predicting global warming” and the other half to Giorgio Parisi “for the discovery of the interplay of disorder and fluctuations in physical systems from atomic to planetary scales.”.Parisi is rewarded for his theoretical solutions to a vast array of problems in the theory of complex systems.

The Intergovernmental Panel on Climate Change (IPCC) had won the Peace Nobel in 2007, an acknowledgement of its efforts in creating awareness for the fight against climate change .A Chemistry Nobel to Paul Crutzen in 1995, for his work on the ozone layer, is considered the only other time someone from atmospheric sciences has won this honour

It all begin with small footsteps

In 2015, Carbon Brief, a UK-based climate-focused online publication, asked the main authors of the fifth assessment report of the Intergovernmental Panel on Climate Change (IPCC) to identify the three most influential climate change research papers ever published. The paper that received the most votes was one by Syukuro Manabe and Richard Wetherald way back in 1967, that, for the first time, had described the impact of carbon dioxide and water vapour on global warming.

The influence of Manabe, now 90, on climate science and its practitioners has been unparalleled. On Tuesday, he was awarded the Nobel Prize for Physics (Wetherland died in 2011). Manabe shared one half of the prize with Klaus Hasselmann, another climate scientist, while the other half went to Georgio Parisi for his contributions in advancing the understanding of complex systems . These are systems with a very high degree of randomness; weather and climate phenomena are examples of complex systems. The Nobel Prize Committee said the Physics Prize this year was given for “groundbreaking contributions to our understanding of complex systems”.

This is the first time climate scientists have been awarded the Physics Nobel. The IPCC had won the Peace Nobel in 2007, an acknowledgement of its efforts in creating awareness for the fight against climate change, while a Chemistry Nobel to Paul Crutzen in 1995, for his work on the ozone layer, is considered the only other time someone from atmospheric sciences has won this honour.

The recognition of Manabe and Hasselmann, therefore, is being seen as an acknowledgment of the importance that climate science holds in today’s world.“That 1967 paper was seminal work. It was the first description of the processes of global warming. Manabe and Wetherland also created a climate model for the first time. The sophisticated models that we run today, which are so crucial to climate science, trace their ancestry to that model created by Manabe. He was a pioneer in so many ways, and the father of climate modelling,” said R Krishnan, director of Centre of Climate Change Research at Pune’s Indian Institute of Tropical Meteorology.

R Krishnan, director of Centre of Climate Change Research at Pune’s Indian Institute of Tropical Meteorology, had worked with Manabe at the Frontier Research Centre for Global Change in Japan in the late 1990s. Manabe, a Japanese, spent most of his career at the Geophysical Fluid Dynamics Laboratory at Princeton University in the United States.

Hasselmann, a German, who too is now 90, is an oceanographer who ventured into climate science. He is best known for his work on identifying specific signatures, or “fingerprints” as the Nobel committee called them, in the climate phenomena that enabled scientists to ascertain whether these were caused by natural processes or human activities.

Pioneering model for the effect of carbon dioxide

In the 1950s, Japanese atmospheric physicist Syukuro Manabe was one of the young and talented researchers in Tokyo who left Japan, which had been devastated by war, and continued their careers in the US. The aim of Manabes’s research, like that of Arrhenius around seventy years earlier, was to understand how increased levels of carbon dioxide can cause increased temperatures. However, while Arrhenius had focused on radiation balance, in the 1960s Manabe led work on the development of physical models to incorporate the vertical transport of air masses due to convection, as well as the latent heat of water vapour.

To make these calculations manageable, he chose to reduce the model to one dimension – a vertical column, 40 kilometres up into the atmosphere. Even so, it took hundreds of valuable computing hours to test the model by varying the levels of gases in the atmosphere. Oxygen and nitrogen had negligible effects on surface temperature, while carbon dioxide had a clear impact: when the level of carbon dioxide doubled, global temperature increased by over 2°C.

About ten years after Manabe, Klaus Hasselmann succeeded in linking together weather and climate by finding a way to outsmart the rapid and chaotic weather changes that were so troublesome for calculations. Our planet has vast shifts in its weather because solar radiation is so unevenly distributed, both geographically and over time. Earth is round, so fewer of the sun’s rays reach the higher latitudes than the lower ones around the Equator. Not only this, but the Earth’s axis is tilted, producing seasonal differences in incoming radiation. The differences in density between warmer and colder air cause the colossal transports of heat between different latitudes, between ocean and land, between higher and lower air masses, which drive the weather on our planet.

However, nothing could be more wrong when it comes to the weather. This is partly because, in practice, it is impossible to be precise enough – to state the air temperature, pressure, humidity or wind conditions for every point in the atmosphere. Also, the equations are nonlinear; small deviations in initial values can make a weather system evolve in entirely different ways. Based on the question of whether a butterfly flapping its wings in Brazil could cause a tornado in Texas, the phenomenon was named the butterfly effect.

Around 1980, Giorgio Parisi presented his discoveries about how apparently random phenomena are governed by hidden rules. His work is now considered to be among the most important contributions to the theory of complex systems.

The particles in a gas can be regarded as tiny balls, flying around at speeds that increase with higher temperatures. When the temperature drops, or pressure increases, the balls first condense into a liquid and then into a solid. This solid is often a crystal, where the balls are organised in a regular pattern. However, if this change happens rapidly, the balls may form an irregular pattern that does not change even if the liquid is further cooled or squeezed together.

The Nobel Prize in Physiology Or Medicine 2021: Research by David Julius and Ardem Patapoutian Disentangled Mysteries about “somatosensation”