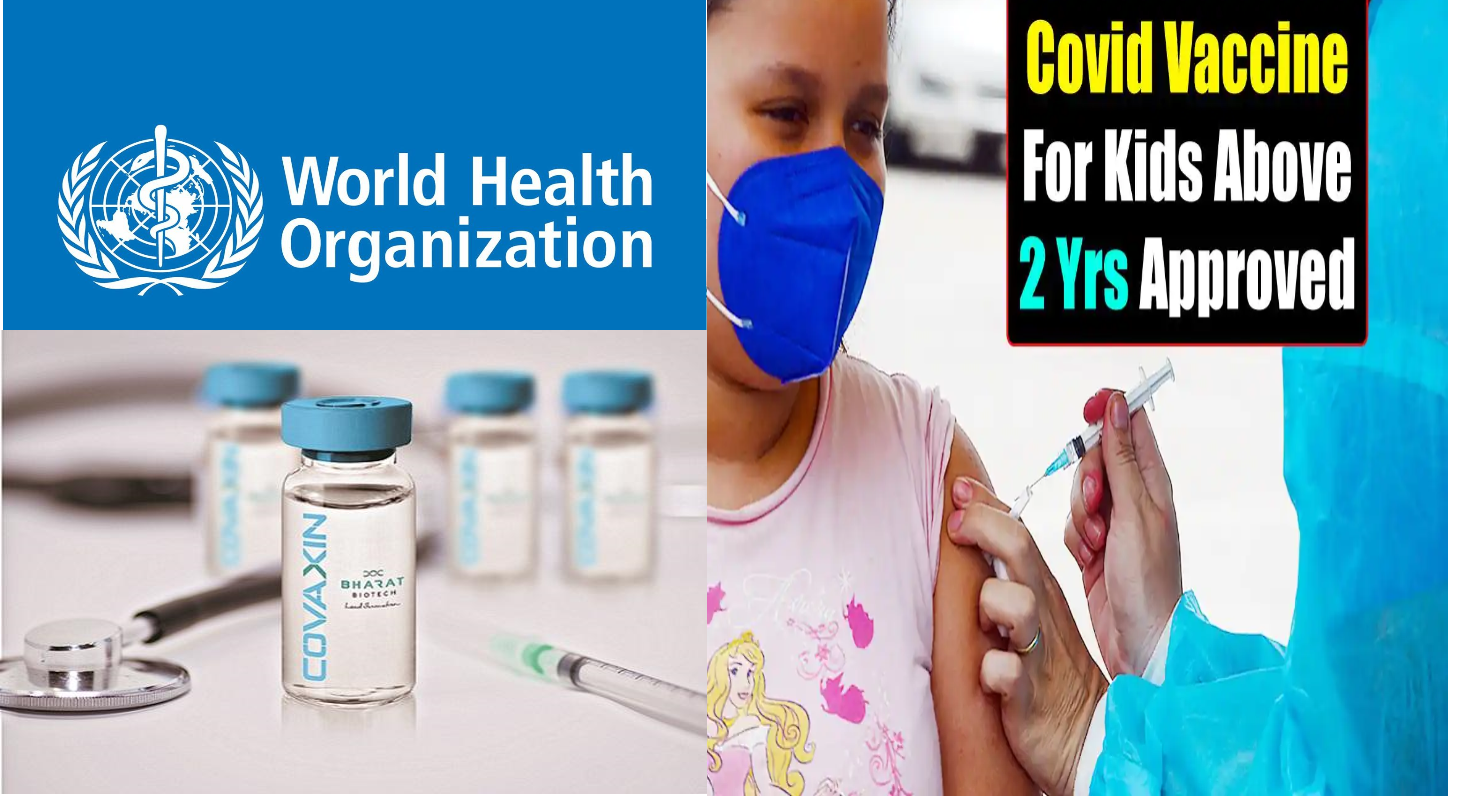 WHO advisory group to meet on Oct 26 to decide on Bharat Biotech’s Covaxin.

“WHO has been working closely with Bharat Biotech to complete the dossier,” she tweeted.

“The technical advisory group will meet on Oct 26th to consider EUL for Covaxin,” she tweeted.

WHO had earlier said that Bharat Biotech has been submitting data to it on a rolling basis and had submitted additional information on 27 September after the global health body sought more data. Bharat Biotech had submitted EOI (Expression of Interest) on April 19 for its vaccine. The WHO said it began rolling data of the vaccine on July 6.

Rolling data allows the WHO to start its review right away, as information continues to come in, to accelerate the overall review process.

According to the WHO, submissions for pre-qualification or listing under the emergency use procedure are confidential. If a product submitted for assessment is found to meet the criteria for listing, the WHO will publish the results widely. Duration of the emergency use listing process depends on the quality of the data submitted by the vaccine manufacturer and on the data meeting the WHO’s criteria, according to the agency.

The indigenously developed Bharat Biotech’s Covaxin is one of the six vaccines that have received emergency use authorisation from India’s Drug Regulator and is being used in the nationwide anti-COVID-19 inoculation programme along with Covishield and Sputnik V.

Bharat Biotech recently said it submitted all data pertaining to Covaxin to the WHO for EUL and is awaiting feedback from the global health watchdog.

“WHO experts are currently reviewing this information if it addresses all questions raised, WHO assessment will be finalized next week,” it had tweeted on October 5 after the Hyderabad-based company made a presentation on the safety and efficacy data for its vaccine to the Strategic Advisory Group of Experts on Immunization (SAGE), an expert body that advises the WHO

In a meeting held on October 5, the company made a presentation of clinical data from Covaxin’s Phase 1, 2, 3 and post-marketing studies on safety, immunogenicity, efficacy and effectiveness to the SAGE.

“The company in its presentation has shared about the wide acceptability of the vaccine. It also informed the experts that the vaccine has been approved in 14 countries and over 70 million doses have been sent to overseas markets,” a person in the know told ET. The details of ongoing and planned studies on safety and effectiveness have also been submitted to the expert body, the person said.

“The decision will be taken by the WHO based on the recommendations of the SAGE,” said another person.

WHO’s approval will allow Bharat Biotech to export the vaccine to more countries. Also, people inoculated with Covaxin will be able to travel to many countries without restrictions.

“Our goal is to have a broad portfolio of vaccines approved for emergency use and to expand access to populations everywhere,” Swaminathan further tweeted.

The national drugs regulator’s subject expert committee approved the use of Bharat Biotech’s Covaxin’s in children between 2 and 18 years of age as a layer of protection against coronavirus or Covid-19 disease, people familiar with the matter said. An official claimed that Covaxin’s efficacy among children was found to be similar to that in adults but a decision on its inclusion in the national vaccination programme was yet to be taken.

Covaxin is the second Covid-19 vaccine to be approved for emergency use among children in India after Zydus Healthcare’s ZyCoV-D, meant for children above 12 years of age.

“As per the data that the company submitted, the vaccine has been found to be safe and efficacious in children. The experts were of the opinion that it should be allowed for use in children,” a senior official said on condition of anonymity.

In May this year, drugs controller general of India Dr VG Somani permitted Bharat Biotech to conduct phase 3 clinical trials of its Covid vaccine on 525 child volunteers. After it ended in September, the trial data was submitted to the drugs regulator in the first week of October.

“COVAXIN Clinical trials data of 2-18 years age group has been submitted to Central Drugs Standard Control Organisation (CDSCO). COVAXIN is the first Covid-19 vaccine to be tested in the 2-6 years age group. This was feasible due to the safety of the manufacturing platform and empirical evidence from phase I, II, III clinical trials in adults,” said India’s vaccine major in a statement.

India to procure over 30 crore COVID-19 vaccine doses per month by January.

India will have a capacity of more than 30 crores by next year per month, which includes Covishield, Covaxin, ZyCoV-D and Biological E, sources told.

According to the sources, the production of 60 lakh doses of Zydus Cadila’s ZyCoV-D are already ready with the company and Biological E will be submitting the data till November end of phase -3 trials. The Biological E is the third Indian company to make Covid-19 vaccines. The company has also started stockpile doses.

Biological E will be providing 30 crore doses and another company that is expected to provide doses is Gennova which is the fourth Indian company doing trials of mRNA vaccines. India is expected to get Gennova’s mRNA vaccine doses by February.

Earlier, on September 2, NITI Aayog Member (Health) VK Paul had said that the Hyderabad-based pharmaceutical company, Biological E, is expected to launch its vaccine against coronavirus in October this year.

Paul had told ANI that Phase 3 of Biological E’s trial is underway. “Stockpile is being produced. We should wait for the results. We hope it’ll be in the next month or two. They’ve made a broad commitment that they’ll supply a significant amount by year-end.”

India procured more than 26 crore doses in the month of September also.

Centre plans to achieve 100 crore doses in next week.

Earlier, it was expected to reach the target between October 10 to October 12. The delay and decline in Covid vaccination are due to the festival season and hesitation in the second dose.

India may accelerate the export of Covid-19 vaccines under its humanitarian initiative ‘Vaccine Maitri’ by December after having an excess number of doses in the country.

The vaccine is developed using Whole-Virion Inactivated Vero Cell derived platform technology. Inactivated vaccines do not replicate and are therefore unlikely to revert and cause pathological effects. They contain dead virus, incapable of infecting people but still able to instruct the immune system to mount a defensive reaction against an infection.

Phase I and II trials

In May 2020, Indian Council of Medical Research’s (ICMR’s) National Institute of Virology approved and provided the virus strains for developing a fully indigenous COVID-19 vaccine. In June 2020, the company received permission to conduct Phase I and Phase II human trials of a developmental COVID-19 vaccine codenamed BBV152, from the Drugs Controller General of India (DCGI), Government of India. A total of 12 sites were selected by the Indian Council for Medical Research for Phase I and II randomised, double-blind and placebo-controlled clinical trials of vaccine candidate.

In January 2021, the company published Phase I trial results in The Lancet. On 8 March 2021, Phase II results were published in The Lancet. The study showed that Phase II trials had a higher immune response and induced T-cell response due to the difference in dosing regime from Phase I. The doses in Phase II were given at 4 weeks interval as opposed to 2 weeks in Phase I. Neutralization response of the vaccine were found significantly higher in Phase II.

In November 2020, Covaxin received the approval to conduct Phase III human trials after completion of Phase I and II. A randomised, double-blinded, placebo-controlled study among volunteers of age group 18 and above, it started on 25 November and involved around 26,000 volunteers from across 22 sites in India.[ Refusal rate for Phase III trials was much higher than that for Phase I and Phase II. As a result, only 13,000 volunteers had been recruited by 22 December with the number increasing to 23,000 by 5 January.

Multiple ethical breaches have been reported at one of their trial sites in Bhopal, potentially hampering the quality of overall data.

On 3 July 2021, Bharat Biotech reported that it had concluded the analysis of phase III trials and published efficacy data in the medRxiv pre-print.

In June 2021, Bharat Biotech announced the start of phase IV trials to evaluate the vaccine’s real-world effectiveness. A study of effectiveness and hesitancy study in Healthcare Workers of Max Group of Hospitals at New Delhi from Covaxin and Covishield is under trials.

In May 2021, Drugs Controller General of India (DCGI) approved clinical trials in the age group of 2 to 18 years. The trials are conducted at AIIMS Delhi and Patna. As many as 54 children had registered at the AIIMS Patna. In total 525 participants are enrolled in the study as per clinical trial data.

In December 2020, the Alpha variant or lineage B.1.1.7, was identified in the UK. An in vitro study on this variant was carried out and preliminary results show Covaxin to be effective in neutralizing this strain.

In April 2021, the Indian Council of Medical Research reported that the vaccine has shown promising results in neutralizing lineage B.1.617.

In May 2021, a joint investigation by the scientists of National Institute of Virology (NIV) India, found the vaccine effective in neutralizing the Zeta variant or lineage P.2.

In June 2021, a group of researchers at the National Institute of Virology (NIV) India, collected sera from recovered patients and people who had received the Covaxin. They found the vaccine to be effective in neutralizing the Delta (B.1.617.2) and Beta (B.1.351) variants] Later, the US National Institute of Health also approved the findings where the adjuvant used was developed jointly with funding from NIH.

WHO grants Most-awaited Emergency Use Listing to Bharat...