Tecentriq is indicated to be given as adjuvant treatment after surgery and platinum-based chemotherapy for individuals with NSCLC.

A monoclonal antibody, Tecentriq attaches to programmed death ligand-1 (PD-L1) protein and hinder its interactions with PD-1 and B7.1 receptors. It has demonstrated benefit in several kinds of lung cancer, with six indications presently approved in the US.

The FDA approval is based on interim analysis data from the international, multicentre, randomised, open-label Phase III IMpower010 clinical trial.

The trial analysed the efficacy and safety of Tecentriq versus best supportive care (BSC) in Stage IB-IIIA NSCLC patients after surgical resection and up to four adjuvant cisplatin-based chemotherapy cycles.

According to the findings, Tecentriq treatment after surgery and platinum-based chemotherapy lowered the disease recurrence or mortality risk by 34% in PD-L1-positive stage II-IIIA NSCLC patients versus BSC.

The FDA reviewed Roche’s application for Tecentriq through the Project Orbis initiative, a global collaboration between drug regulators that offers a framework for simultaneous submission and review of cancer drugs.

Roche Global Product Development head and chief medical officer Levi Garraway said: “Tecentriq is now the first and only cancer immunotherapy available for adjuvant treatment of NSCLC, introducing a new era where people diagnosed with early lung cancer may have the opportunity to receive immunotherapy to increase their chances for cure.

“Today’s landmark approval gives physicians and patients a new way to treat early lung cancer that has the potential to significantly reduce risk of cancer recurrence, after more than a decade with limited treatment advances in this setting.”

Tecentriq also has four approved indications in advanced non-small cell lung cancer as either a single agent or in combination with targeted therapies and/or chemotherapies.

Tecentriq is available in three dosing options, providing the flexibility to choose administration every two, three or four weeks.

What is Adjuvant therapy?

Adjuvant therapy, also known as adjunct therapy, and adjuvant care, is therapy that is given in addition to the primary or initial therapy to maximize its effectiveness. The surgeries and complex treatment regimens used in cancer therapy have led the term to be used mainly to describe adjuvant cancer treatments. An example of such adjuvant therapy is the additional treatment usually given after surgery where all detectable disease has been removed, but where there remains a statistical risk of relapse due to the presence of undetected disease. If known disease is left behind following surgery, then further treatment is not technically adjuvant.

Programmed death-ligand 1 (PD-L1) is a 40kDa type 1 transmembrane protein that has been speculated to play a major role in suppressing the adaptive arm of immune systems during particular events such as pregnancy, tissue allografts, autoimmune disease and other disease states such as hepatitis. 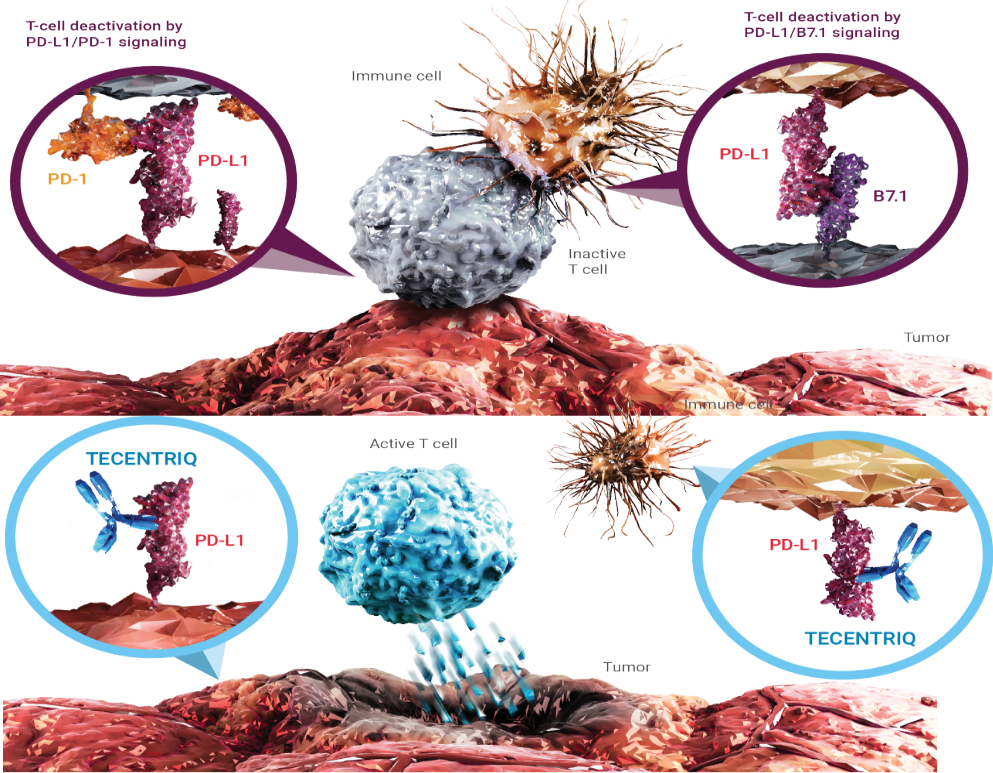 Antibodies are an integral part of the body’s immune system. Normally, the body creates antibodies in response to an antigen (such as a protein in a germ) that has entered the body.

Efficacy was evaluated in IMpower110, a multicentre, international, randomized, open-label trial in patients with stage IV NSCLC whose tumors express PD-L1 and who had received no prior chemotherapy for metastatic disease. Patients were randomly assigned 1:1 to receive Atezolizumab at 1,200 mg every 3 weeks until disease progression or unacceptable toxicity, or to receive platinum-based chemotherapy. The main efficacy outcome measure was overall survival.

What Atezolizumab Is Used For?

For the treatment of patients with locally advanced or metastatic urothelial carcinoma who:

Have disease progression during or following platinum-containing chemotherapy.

Have disease progression within 12 months of neoadjuvant or adjuvant treatment with platinum-containing chemotherapy.

For treatment in combination with carboplatin and etoposide for first-line treatment of patients with extensive-stage small cell lung cancer.

For treatment in combination with cobimetinib and vemurafenib of patients with BRAF V600 mutation-positive unrespectable or metastatic melanoma.

Note: If a drug has been approved for one use, physicians may elect to use this same drug for other problems if they believe it may be helpful.

How Atezolizumab Is Given?

Atezolizumab is given as an intravenous injection through a vein (IV) over 60 minutes for the first infusion, and if no infusion reaction, over 30 minutes for each infusion thereafter.

Treatment cycles are every 3 weeks (21 days)

You may receive medications before the infusion to reduce allergic reactions.

The recommended dose of Atezolizumab for the treatment of patients with NSCLC is 840 mg every 2 weeks, 1,200 mg every 3 weeks, or 1,680 mg every 4 weeks, administered intravenously over 60 minutes.

Important things to remember about the side effects of Atezolizumab:

Most people do not experience all of the side effects listed.

Observed side effects below may NOT be related to Atezolizumab.

Side effects are often predictable in terms of their onset and duration.

Immune-related side effects can occur weeks or months after discontinuation of treatment.

There are many options to help manage and prevent worsening of side effects.

There is no relationship between the presence or severity of side effects and the effectiveness of the medication.

The following side effects have been observed commonly for patients taking Atezolizumab but may NOT be related to Atezolizumab:

These side effects have been observed less commonly of patients receiving Atezolizumab but may NOT be related to Atezolizumab:

*A rare but possible side effect of this class of drug is the trigger of an auto-immune reaction. This can happen at any time when taking this drug, and/or after stopping the drug. The immune system may go after normal cells in the body, e.g. lungs, skin, intestines, endocrine system, liver, pancreas, eyes, etc. Symptoms and signs of this reaction will be closely monitored throughout treatment (e.g. cough, shortness of breath, wheezing, rash, diarrhea/blood in stool, fatigue/weakness, visual changes, etc.). Lab work will also be used to check for elevated liver enzymes, kidney thyroid function, electrolytes, glucose, and blood counts.

Contact your health care provider right away if you have any new or worsening symptoms.

Not all potential side effects are listed above. Some of those that are rarer are not listed here. However, you should always inform your health care provider if you experience any unusual symptoms or changes.

When was Tecentriq approved for Nsclc?

The FDA also approved the VENTANA PD-L1 (SP142) Assay as a companion diagnostic device for selecting patients with NSCLC for treatment with Atezolizumab.

Hoffmann-La Roche AG, commonly known as Roche, is a Swiss multinational healthcare company that operates worldwide under two divisions: Pharmaceuticals and Diagnostics. Its holding company, Roche Holding AG, has bearer shares listed on the SIX Swiss Exchange. The company headquarters are located in Basel. Roche is the largest pharmaceutical company in the world, and the leading provider of cancer treatments globally.

The company controls the American biotechnology company Genentech, which is a wholly owned affiliate, and the Japanese biotechnology company Chugai Pharmaceuticals, as well as the United States-based companies Ventana and Foundation Medicine. Roche’s revenues during fiscal year 2020 were 58.32 billion Swiss francs. Descendants of the founding Hoffmann and Oeri families own slightly over half of the bearer shares with voting rights (a pool of family shareholders 45%, and Maja Oeri a further 5% apart), with Swiss pharma firm Novartis owning a further third of its shares. Roche is one of the few companies increasing their dividend every year, for 2020 as the 34th consecutive year. F. Hoffmann-La Roche is a full member of the European Federation of Pharmaceutical Industries and Associations (EFPIA).

About Roche in cancer immunotherapy

Roche’s rigorous pursuit of ground breaking science has contributed to major therapeutic and diagnostic advances in oncology over the last 50 years, and today, realising the full potential of cancer immunotherapy is a major area of focus. With over 20 molecules in development, Roche is investigating the potential benefits of immunotherapy alone, and in combination with chemotherapy, targeted therapies or other immunotherapies with the goal of providing each person with a treatment tailored to harness their own unique immune system to attack their cancer. Our scientific expertise, coupled with an innovative pipeline and extensive partnerships, gives us the confidence to continue pursuing the vision of finding a cure for cancer by ensuring the right treatment for the right patient at the right time.

About the IMpower010 study

IMpower010 is a Phase III, global, multicentre, open-label, randomized study evaluating the efficacy and safety of Tecentriq compared with BSC, in participants with Stage IB-IIIA NSCLC (UICC/AJCC 7th edition), following surgical resection and up to 4 cycles of adjuvant cisplatin-based chemotherapy. The study randomized 1,005 people with a ratio of 1:1 to receive either Tecentriq (up to 16 cycles) or BSC. The primary endpoint is investigator-determined DFS in the PD-L1-positive Stage II-IIIA, all randomized Stage II-IIIA and intention-to-treat (ITT) Stage IB-IIIA populations. Key secondary endpoints include overall survival (OS) in the overall study population, ITT Stage IB-IIIA NSCLC.

Lung cancer is one of the leading causes of cancer death globally.1 each year 1.8 million people die as a result of the disease; this translates into more than 4,900 deaths worldwide every day.1 Lung cancer can be broadly divided into two major types: NSCLC and SCLC. NSCLC is the most prevalent type, accounting for around 85% of all cases.2 Approximately 50% of patients with NSCLC are diagnosed with early-stage (Stages I and II) or locally advanced (Stage III) disease.3 Today, about half of all people with early lung cancer still experience a cancer recurrence following surgery.4 Treating lung cancer early, before it has spread, may help prevent the disease from returning and provide people with the best opportunity for a cure.