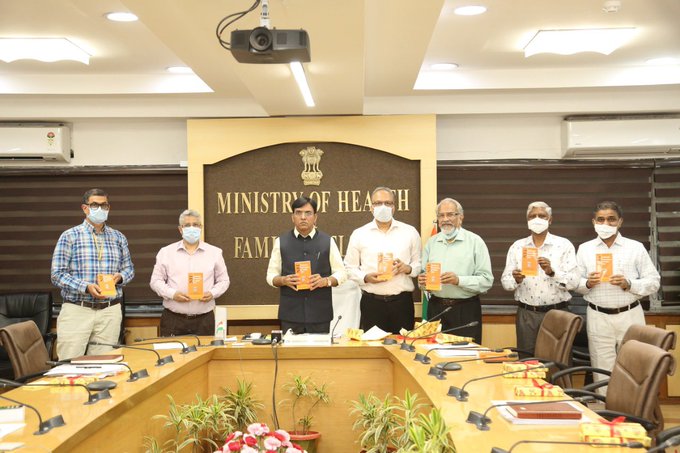 Union Minister for Health and Family Welfare Dr. Mansukh Mandaviya today launched the Sixth Edition of National Formulary of India (NFI). NFI has been published by Indian Pharmacopoeia Commission (IPC) to promote rational use of medicines in the country.

Speaking at the event, Dr. Mandaviya congratulated IPC for coming up with the new edition of NFI. He appreciated the efforts of all the experts, doctors and researchers who contributed in the compilation of new edition. He said that NFI, 2021 would act a guidance document for all the healthcare professionals such as clinicians, pharmacists, nurses, dentists etc. It will play a crucial role in daily clinical practices.

He said that medicines behave differently in different bodies. It is important to know about the content, impact and side effects of medicines. The NFI is published to promote rational use of medicines in the country. It will be very beneficial for Clinicians and Healthcare professionals while prescribing the medicines to the patients. COVID-19 Restrictions in India Extended Till November 30, Says MHA.

The 6th Edition of NFI 2021 has been drafted by adopting the principle ‘do not miss critical and do not overload’ the information by revising the appendices, chapters and drug monographs. The chapters such as Analgesics, Antipyretics and Anti-inflammatory drugs, Antiepileptics, Antacids and Antiulcer Drugs, Antiallergics and Drugs Used in Anaphylaxis, Antidiarrhoeals and Laxatives, Antidotes and Substances Used in Poisoning, Antimigraine drugs, Basics of Medical Emergencies, Dermatological Drugs, Disease Modifying Anti-Rheumatic Drugs (DMARDs) and Drugs for Gout, Diuretics, Drugs in Osteoporosis, Drugs for Inflammatory Bowel Disease, Drugs for Respiratory Diseases, Ophthalmological Preparations and Psychotherapeutics Drugs were revised thoroughly by involving the subject specific experts/specialist in the country.

Important weblinks related to the NLEM, drugs banned in India, National Health Portal drugs banned in sports, immunisation schedule, wherever necessary are provided for information to readers and a special note on “How to use NFI?” and salient feature of NFI are added in this edition, according to the statement.
Only indications approved by the Indian drug regulator Central Drugs Standard Control Organisation (CDSCO), clinically relevant and as per standard care are included, the term ‘availability’ is now replaced with ‘dosage forms and usual strength’ and only the clinically relevant precautions and contraindications are included.

The salient feature of this edition includes:

About National Formulary of India:

Formulary is a manual containing clinically oriented summaries of pharmacological information about selected drugs. The manual may also include administrative and regulatory information pertaining to the prescribing and dispensing of drugs. A national formulary generally concentrates on available and affordable medicines that are relevant to the treatment of diseases in a particular country. Formularies are also frequently created for different levels of health care, different sectors and for individual hospitals.

The first, second and third editions of National Formulary of India (NFI) were published in 1960, 1966 and 1979 respectively by the Ministry of Health, Govt. of India. In the past 3 decades there has been vast expansion in the range of new drugs and their formulations.

The WHO EML is a model list. The decision about which medicines are essential remains a national responsibility based on the country’s disease burden, priority health concerns, affordability concerns etc. Ministry of Health and Family Welfare, Government of India hence prepared and released the first National List of Essential Medicines of India in 1996 consisting of 279 medicines. This list was subsequently revised in 2003 and had 354 medicines. Later in 2011, the list was revised and had 348 medicines. Till June 2018, 851 medicines (including 4 medical devices i.e. Cardiac stents, drug eluting stents, condoms and intra uterine devices) are regulated under Revised Schedule – I based on National List of Essential Medicines, 2015 (NLEM, 2015).

The NLEM may have multiple uses. It can:

The Central Drugs Standard Control Organisation (CDSCO) is India’s national regulatory body for pharmaceuticals and medical devices. It serves a similar function to the European Medicines Agency of the European Union, the PMDA of Japan, the Food and Drug Administration (FDA) of the United States, and the Medicines and Healthcare products Regulatory Agency of the United Kingdom, and the National Medical Products Administration (NMPA) of China. The Indian government has announced its plan to bring all medical devices, including implants and contraceptives under a review of the Central Drugs and Standard Control Organisation (CDSCO).