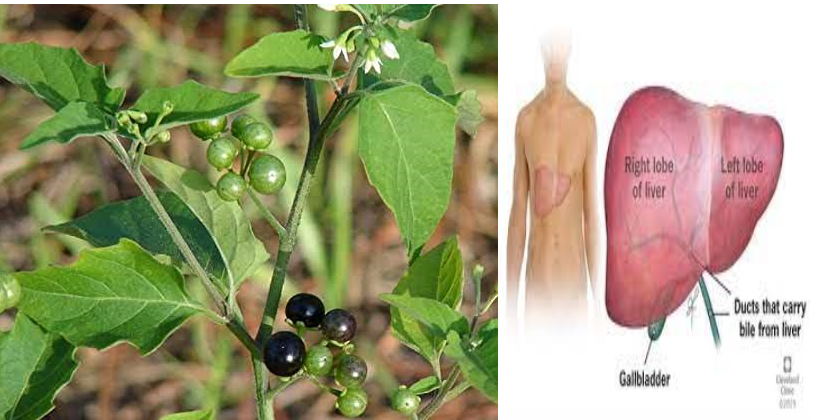 ‘Manathakkali’ (Black nightshade or Solanum nigrum), a berry-bearing shrub found in the backyard, is traditionally known for its medicinal value. Now the United States Food and Drug Administration (FDA) has noticed the potential of a compound isolated from the plant to treat liver cancer, thanks to the findings of a team of scientists at Rajiv Gandhi Centre for Biotechnology (RGCB).

The US agency has given the compound an ‘orphan drug’ designation, which helps in the development and evaluation of new treatments for rare diseases. It will also help fast-track the drug’s approval. RGCB senior scientist Dr Ruby John Anto, who along with her student Dr Lekshmi R Nath isolated the drug molecule — Uttroside-B — from the leaves of Manathakkali plant, said: “There is only one FDA-approved drug available for liver cancer treatment at present. The compound we developed has found to be more effective than the one available. Toxicity evaluation in human volunteers has shown that the compound is also effective in treating fatty liver.”

“The findings are pathbreaking, given that the liver which primarily detoxifies food while aiding digestion is found to be increasingly susceptible to cancer in modern times. The malignant disease of the liver is estimated to kill no less than 8 lakh people annually even as 9 lakh new cases are reported every year,” said the RGCB director. Dr Ruby and her team is currently studying the mechanism of action of the compound and evaluating its efficacy against fatty liver disease, non-alcoholic SteatoHepatitis and liver cancer caused by food toxins. This is done in collaboration with Dr L Ravishankar (CSIR-NIST, Thiruvananthapuram), who has developed a novel method to isolate the compound from solanum nigrum leaves.

Manathakkali plant is a small plant that grows to about 3 feet and it can be commonly found all over India and Africa. The leaves are alternate dark green, long and elongated. Hanging from the leaf axil, the flowers are found in clusters. The flowers have 5 petal, small and white in colour. The fruits are small even smaller than pea and are almost purple black in colour. The small dark fruits (sukkuti palam in Tamil) tastes divine

The botanical name of manathakkali plant is Solanum Nigrum (It belongs to the family Solanaceae and genus Solanum). Manathakkali is the Tamil name and it is commonly called Black Night Shade in English. It is called Mani Thakkali in Malayalam, Kamanchi Chettu | Peddakasha Pandla Koora in Telugu, Kakki Soppu | Kage Soppu in Kannada and Makoi in Hindi.

Manathakkali has wonderful anti inflammatory properties, both consuming it and applying it externally will help. This is due to the presence of alkaloids present in manathakkali. Especially Solanin A isolated from manathakkali greatly helps reduce inflammation. If you are suffering from pain and inflammation, try to consume manathakkali regularly…..

Another interesting and traditional use of the ripe berries is it’s anti asthma properties. In a study, petroleum ether extract exhibited significant anti asthma properties. Though for the study petroleum ether extract was used, the fresh berries can also be consumed for treating asthma. This is due to the presence of active compound β-sitosterol in the berries.

One of the well known traditional uses of manathakkali is it’s anti ulcer properties. For any one suffering from ulcer, we boil manathakkali in coconut milk and salt and give it as a soup, it works wonderfully. Research has proven that manathakkali blocks acid secretion that leads to ulcers and you can read the study here.

Though it is not a common practice here, in countries like Nigeria, it is used as a remedy for epileptic seizures! This information actually surprised me because I have always thought manathakkali is only used for treating ulcers. A study done on rats has proven it to be effective against seizures and you can read the study here.

Manathakkali has powerful anti viral properties. Especially it is very effective against hepatitis C which is the major cause of liver problems including liver cirrhosis and hepatocellular carcinoma. It has been proven through study that methanol and chloroform extract is effective but we can also use the water extract too.

Another interesting use the manathakkali fruits is that the fruit extract is very effective against Culex Quinquefasciatus variety mosquitoes. Both the extracts from green and ripe berries have been found to have larvicidal properties. Mosquitoes are the leading causes of death and so it is important that we find effective natural remedies like manathakkali to get rid of them.

Manathakkali has wonderful liver protective properties and greatly helps prevent liver damage. In a study water extract of the plant significantly reduced the damaged caused due to carbon tetrachloride ingestion in rats. Hepatoprotective efects is due to the presence of antioxidants and it’s free radical scavenging properties.

Manathakkali generally agrees with everyone including pregnant women and children. If had in moderation, manathakkali will not cause any problems at all. But with like any other greens, if had in excess or if it is not cooked properly will cause stomach problems like stomach pain and diarrhea.

What is liver cancer?

Cancer is a disease that happens when abnormal cells grow too quickly and leave less space for normal cells.

Secondary liver cancer is cancer that started in some other place in the body and moved to the liver. This type is also called metastatic liver cancer.