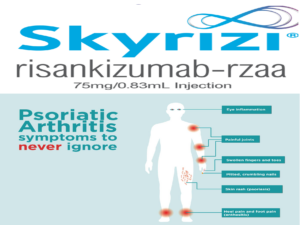 AbbVie announced that the European Commission (EC) has approved SKYRIZI® (Risankizumab, 150 mg, subcutaneous injection at week 0, week 4 and every 12 weeks thereafter) alone or in combination with methotrexate (MTX), for the treatment of active psoriatic arthritis in adults who have had an inadequate response or who have been intolerant to one or more disease-modifying anti-rheumatic drugs (DMARDs). Marking the second indication for SKYRIZI, the Marketing Authorization will be valid in all member states of the European Union, as well as Iceland, Liechtenstein, Norway and Northern Ireland.

“People living with psoriatic arthritis struggle with psoriatic lesions and joint inflammation that causes swelling and pain. Reducing these symptoms may give people the ability to resume their daily activities and improve their quality of life,” said Michael Severino, M.D., vice chairman and president, AbbVie. “We are excited by the EC approval of SKYRIZI for the treatment of adults with active psoriatic arthritis.”

SKYRIZI received EC approval based on data from two Phase 3 clinical studies, KEEPsAKE-1 and KEEPsAKE-2. In these studies, SKYRIZI met the primary endpoint of ACR20 response at week 24 versus placebo, and ranked secondary endpoints including, but not limited to, improvements in several clinical manifestations of psoriatic arthritis such as physical function (as measured by the Health Assessment Questionnaire Disability Index [HAQ-DI]) and minimal disease activity (MDA) at week 24.

Highlights from the pivotal Phase 3 program:

“Millions of people living with psoriatic arthritis are impacted by psoriatic lesions, joint pain, stiffness and fatigue,” said Lars Erik Kristensen, M.D., Ph.D., consultant and head of science at the Parker Institute in Copenhagen Denmark, associate professor, Lund Sweden, SUS University Hospital. “As seen in this Phase 3 clinical trial program in psoriatic arthritis, SKYRIZI has the potential to be a valuable new treatment option, helping to improve the signs and symptoms of the disease.”

SKYRIZI (Risankizumab) is part of a collaboration between Boehringer Ingelheim and AbbVie, with AbbVie leading development and commercialization globally.

About KEEPsAKE-1 and KEEPsAKE-2:

The primary endpoint for both studies was the achievement of ACR20 response at week 24. Ranked secondary endpoints included, but were not limited to, the achievement of MDA as well as the change from baseline in HAQ-DI at week 24. The studies are ongoing, and the long-term extension remains blinded to the original randomization and evaluates the long-term safety, tolerability and efficacy of SKYRIZI in patients who have completed the placebo-controlled period.

SKYRIZI (Risankizumab) is an interleukin-23 (IL-23) inhibitor that selectively blocks IL-23 by binding to its p19 subunit. IL-23, a cytokine involved in inflammatory processes, is thought to be linked to a number of chronic immune-mediated diseases, including psoriasis. The approved dose for SKYRIZI is 150 mg (either as two 75 mg pre-filled syringe injections or one 150 mg pre-filled pen or pre-filled syringe injection), administered by subcutaneous injection at week 0 and 4, and every 12 weeks thereafter. The SKYRIZI 150 mg formulation was approved by the European Union in May 2021. Phase 3 trials of SKYRIZI in psoriasis, Crohn’s disease, ulcerative colitis and psoriatic arthritis are ongoing. Risankizumab has been approved in the European Union, the United States, and Canada for the treatment of moderate to severe plaque psoriasis in adults who are candidates for systemic therapy. In Japan, it is approved for treating plaque psoriasis, generalized pustular psoriasis, erythrodermic psoriasis and psoriatic arthritis in adults who have an inadequate response to conventional therapies.

Risankizumab acts to prevent the release of pro-inflammatory cytokines and chemokines that often lead to inflammatory skin symptoms, such as redness, pain, and plaques. Risankizumab binds with a high affinity to the p19 subunit of human interleukin 23 (IL-23) cytokine 2, thereby preventing its action on the IL-23 receptor. IL-23 is a cytokine released in the human body that is involved in inflammatory and immune processes, especially in peripheral tissues. 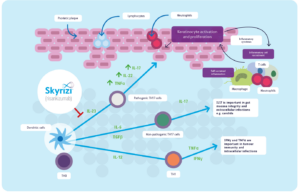 IL-23 plays a role in polarized type-1 T cell-mediated inflammatory response. Type-1 T cells are found in very high concentrations in psoriasis-affected skin in addition to the blood of psoriasis patients. By promoting the action of interferon (IFN)-gamma 7, type-1 T cells increase the expression of many inflammatory genes that induce inflammatory cascades 5. Variants of the gene encoding IL-23 p19 subunit and the IL-23 receptor have been recognized as part of the pathogenesis of plaque psoriasis, rendering IL-23 an ideal target for Risankizumab therapy.

The absolute bioavailability of Risankizumab is estimated at approximately 89% after a dose given by subcutaneous injection. In a clinical study, peak concentration (Cmax) was reached within 3-14 days after beginning risankizumab therapy.

In patients diagnosed with psoriasis, estimated risankizumab trough plasma concentrations were found to be 1.72 ± 1.11 at week 16 of treatment and 1.36 ± 0.923 µg/mL at week 52 of treatment, using a predictive pharmacokinetic model.

The approximate volume of distribution at steady state is 11.2 L (34%) in patients diagnosed with plaque psoriasis, but may vary with increased body weight.

The metabolic pathway of Risankizumab has not been characterized. As a humanized IgG1 monoclonal antibody, Risankizumab is likely to be catabolized into small peptides and amino acids in the same way as endogenous IgG.

Systemic clearance is estimated at 0.31 L per day (24%). One study found that interindividual clearance for risankizumab varied by 37%. Risankizumab clearance is found to decrease with an increase in body weight.Despite this tendency, no dose adjustment is advised in overweight patients.

In cases of overdose, ensure to monitor the patient for any signs or symptoms of adverse reactions and provide supportive treatment accordingly.

There are limited data regarding the administration of risankizumab in pregnant women. An associated risk of major birth defects, miscarriage, or adverse effects on the mother or fetus is not yet established Label. It is important to note, however, that human IgG 6 is known to cross the placenta, and this drug may similarly be transmitted to the growing fetus. Risankizumab belongs to an IgG antibody subclass 6 and likely shares similar properties Label. The Canadian monograph for risankizumab indicates that women of childbearing potential should take adequate contraception during therapy and for at least 20 weeks after the final dose.

Currently, there are no available data regarding risankizumab in human milk, its effect on the production of milk, and its effect on a nursing child. Maternal IgG is, however, found to be excreted in human milk. This drug belongs to an IgG subclass, and may share similar properties.  The benefits of breastfeeding should be considered in addition to the mother’s requirement for risankizumab and any possible risks resulting from nursing while taking this drug, which is likely to be present in human milk.

SKYRIZI is indicated for the treatment of moderate to severe plaque psoriasis in adults who are candidates for systemic therapy. SKYRIZI, alone or in combination with methotrexate (MTX), is indicated for the treatment of active psoriatic arthritis in adults who have had an inadequate response or who have been intolerant to one or more disease-modifying antirheumatic drugs (DMARDs).

Prior to initiating therapy with SKYRIZI, completion of all appropriate immunizations should be considered according to current immunization guidelines. If a patient has received live vaccination (viral or bacterial), it is recommended to wait at least 4 weeks prior to starting treatment with SKYRIZI. Patients treated with SKYRIZI should not receive live vaccines during treatment and for at least 21 weeks after treatment.

AbbVie’s mission is to discover and deliver innovative medicines that solve serious health issues today and address the medical challenges of tomorrow. We strive to have a remarkable impact on people’s lives across several key therapeutic areas: immunology, oncology, neuroscience, eye care, virology, women’s health and gastroenterology, in addition to products and services across its Allergan Aesthetics portfolio.

GlaxoSmithKline`s Nucala (Mepolizumab) gets European Approval for use in Three Additional Eosinophil-driven Diseases.