Biogen Inc. (Nasdaq: BIIB) announced that the European Commission (EC) has granted marketing authorization for VUMERITY® (Diroximel fumarate) to treat adults with relapsing-remitting multiple sclerosis (MS). VUMERITY is a next-generation fumarate that offers the convenience of an oral medication with the established efficacy and well-characterized safety of TECFIDERA® (dimethyl fumarate). Globally, an estimated 2.8 million people live with MS, with more than 1 million people in Europe living with the disease.

“The approval of VUMERITY provides a new oral treatment option with low gastrointestinal discontinuation rates that may help patients to start and adhere to treatment,” said Simon Faissner, M.D., PhD, Assistant Professor at the Department of Neurology, Ruhr-University Bochum. “This medication allows for MS patients in the EU to be treated without having to think about dietary restrictions or when to take a dose in relation to mealtimes which, when treating a chronic disease, may provide patients with additional flexibility in their daily lives.”

The EC’s approval of VUMERITY is based on data from pharmacokinetic bridging studies comparing VUMERITY and TECFIDERA to establish bioequivalent exposure of monomethyl fumarate, the active metabolite, and relied in part on the well-established long-term efficacy and safety profile of TECFIDERA. The approval was also based on findings from EVOLVE-MS-2, a large, randomized, double-blind, five-week, multi-center Phase 3 study to evaluate the gastrointestinal (GI) tolerability of VUMERITY compared to TECFIDERA in patients with relapsing-remitting MS. In EVOLVE-MS-2, the rate of overall treatment discontinuation was lower in participants treated with VUMERITY compared to those treated with TECFIDERA (1.6% compared to 6%, respectively). The difference in the discontinuation rates due to GI tolerability was 0.8% for VUMERITY compared to 4.8% for TECFIDERA. Additionally, flushing was reported in 32.8% of VUMERITY-treated patients and in 40.6% of TECFIDERA treated patients. There were no serious events of flushing or discontinuations due to flushing in the study.

“This approval is a significant step forward in improving treatment adherence for people living with relapsing MS, which can make a meaningful difference on treatment outcomes impacting their daily lives,” said Maha Radhakrishnan, M.D., Chief Medical Officer at Biogen. “The authorization of VUMERITY in the EU brings people with MS a new oral treatment option to meet their individual preferences and needs, with well-established efficacy and a positive GI tolerability profile that continues to be evaluated in the real-world setting.”

VUMERITY was first approved by the U.S. Food and Drug Administration in October 2019 and is also approved in Great Britain and Switzerland. Since its launch in the U.S., real-world data have reinforced the positive GI tolerability profile of VUMERITY and confirmed that the experience demonstrated in clinical trials is consistent with clinical practice.3 Biogen continues to file regulatory submissions in other countries.

About VUMERITY® (Diroximel fumarate)
VUMERITY is an oral fumarate with a distinct chemical structure from TECFIDERA (Dimethyl fumarate), approved in the U.S. for the treatment of relapsing forms of multiple sclerosis in adults, to include clinically isolated syndrome, relapsing-remitting disease and active secondary progressive disease. Once in the body, VUMERITY rapidly converts to monomethyl fumarate, the same active metabolite of dimethyl fumarate providing similar efficacy and safety profiles. 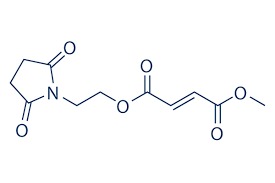 Vumerity is a brand-name prescription medication. It’s FDA-approved for use in adults with certain forms of multiple sclerosis (MS), including:

Vumerity comes as a capsule that you take by mouth. The capsules come in a strength of 231 milligrams (mg) and are delayed release. (A delayed-release capsule slows down the release of the drug until after it passes through the stomach. This delay protects the active drug from being destroyed by stomach acid.)

Currently, the mechanism of action of this drug in MS is not fully understood. Diroximel fumarate is hypothesized to regulate cell signaling pathways, causing beneficial immune and neuroprotective effects. Monomethyl fumarate (MMF) is the active metabolite of diroximel fumarate, and activates the nuclear factor (erythroid-derived 2)-like 2 (Nrf2) pathway in humans. This pathway occurs as a response to oxidative stress in cells. In addition to the above, MMF is a nicotinic acid receptor agonist in the laboratory setting. The relevance of this finding to the treatment of MS is unknown at this time. The mechanism by which this drug leads to less gastrointestinal effects is purported to be due to its lack of a methanol leaving group in its chemical structure, and substitution with inert 2-hydroxyethyl succinimide.

VUMERITY® (Diroximel fumarate) is indicated for the treatment of relapsing forms of multiple sclerosis (MS), to include clinically isolated syndrome, relapsing-remitting disease, and active secondary progressive disease, in adults.

VUMERITY is contraindicated in patients

With known hypersensitivity to Diroximel fumarate, dimethyl fumarate, or to any of the excipients of VUMERITY. Reactions may include anaphylaxis and angioedema

VUMERITY can cause anaphylaxis and angioedema after the first dose or at any time during treatment. Signs and symptoms in patients taking dimethyl fumarate (which has the same active metabolite as VUMERITY) have included difficulty breathing, urticaria, and swelling of the throat and tongue. Patients should be instructed to discontinue VUMERITY and seek immediate medical care should they experience signs and symptoms of anaphylaxis or angioedema

Progressive multifocal leukoencephalopathy (PML) has occurred in patients with MS treated with dimethyl fumarate (which has the same active metabolite as VUMERITY). PML is an opportunistic viral infection of the brain caused by the JC virus (JCV) that typically only occurs in patients who are immunocompromised, and that usually leads to death or severe disability. A fatal case of PML occurred in a patient who received dimethyl fumarate for 4 years while enrolled in a clinical trial

PML has occurred in patients taking dimethyl fumarate in the postmarketing setting in the presence of lymphopenia (<0.9 x 109/L). While the role of lymphopenia in these cases is uncertain, the PML cases have occurred predominantly in patients with lymphocyte counts <0.8×109/L persisting for more than 6 months

At the first sign or symptom suggestive of PML, withhold VUMERITY and perform an appropriate diagnostic evaluation. Typical symptoms associated with PML are diverse, progress over days to weeks, and include progressive weakness on one side of the body or clumsiness of limbs, disturbance of vision, and changes in thinking, memory, and orientation leading to confusion and personality changes

Magnetic resonance imaging (MRI) findings may be apparent before clinical signs or symptoms. Monitoring with MRI for signs consistent with PML may be useful, and any suspicious findings should lead to further investigation to allow for an early diagnosis of PML, if present

Clinically significant cases of liver injury have been reported in patients treated with dimethyl fumarate (which has the same active metabolite as VUMERITY) in the postmarketing setting. The onset has ranged from a few days to several months after initiation of treatment with dimethyl fumarate. Signs and symptoms of liver injury, including elevation of serum aminotransferases to greater than 5-fold the upper limit of normal and elevation of total bilirubin to greater than 2-fold the upper limit of normal have been observed. These abnormalities resolved upon treatment discontinuation. Some cases required hospitalization. None of the reported cases resulted in liver failure, liver transplant, or death. However, the combination of new serum aminotransferase elevations with increased levels of bilirubin caused by drug-induced hepatocellular injury is an important predictor of serious liver injury that may lead to acute liver failure, liver transplant, or death in some patients

Obtain serum aminotransferase, alkaline phosphatase (ALP), and total bilirubin levels prior to treatment with VUMERITY and during treatment as clinically indicated. Discontinue VUMERITY if clinically significant liver injury induced by VUMERITY is suspected

The most common adverse reactions (incidence ≥10% and ≥2% more than placebo) for dimethyl fumarate (which has the same active metabolite as VUMERITY) were flushing, abdominal pain, diarrhea, and nausea

Eosinophilia adverse reactions: A transient increase in mean eosinophil counts was seen during the first 2 months of therapy

TECFIDERA, a treatment for relapsing forms of multiple sclerosis (MS) in adults, is the most prescribed oral medication for relapsing MS in the world and has been shown to reduce the rate of MS relapses, slow the progression of disability and impact the number of MS brain lesions, while demonstrating a well-characterized safety profile in people with relapsing forms of MS. TECFIDERA is approved in 69 countries, and more than 530,000 patients have been treated with it, representing more than 1,000,000 patient-years of exposure across clinical trial use and patients prescribed TECFIDERA.4

TECFIDERA is contraindicated in patients with a known hypersensitivity to dimethyl fumarate or any of the excipients of TECFIDERA. Serious side effects include anaphylaxis and angioedema, and cases of progressive multifocal leukoencephalopathy, a rare opportunistic viral infection of the brain which has been associated with death or severe disability, have been seen with TECFIDERA patients in the setting of prolonged lymphopenia although the role of lymphopenia in these cases is uncertain. Other serious side effects include a decrease in mean lymphocyte counts during the first year of treatment, herpes zoster and other serious infections, liver injury and flushing. In clinical trials, the most common adverse events associated with TECFIDERA were flushing, abdominal pain, diarrhea and nausea. 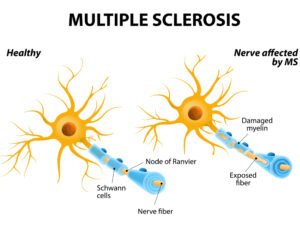 Multiple sclerosis is an unpredictable, often disabling disease of the central nervous system. Symptoms range from numbness and tingling to blindness and paralysis, and there is currently no cure for MS. The progress, severity and specific symptoms of MS in any one person cannot yet be predicted, but advances in research and treatment are leading to better understanding and moving us closer to a world free of MS. An estimated 1 million people live with MS in the United States. Most people with MS are diagnosed between the ages of 20 and 50, and it affects women three times more than men.

As pioneers in neuroscience, Biogen discovers, develops, and delivers worldwide innovative therapies for people living with serious neurological diseases as well as related therapeutic adjacencies. One of the world’s first global biotechnology companies, Biogen was founded in 1978 by Charles Weissmann, Heinz Schaller, Sir Kenneth Murray, and Nobel Prize winners Walter Gilbert and Phillip Sharp. Today, Biogen has the leading portfolio of medicines to treat multiple sclerosis, has introduced the first approved treatment for spinal muscular atrophy, and is providing the first and only approved treatment to address a defining pathology of Alzheimer’s disease. Biogen is also commercializing biosimilars and focusing on advancing the industry’s most diversified pipeline in neuroscience that will transform the standard of care for patients in several areas of high unmet need.

GlaxoSmithKline`s Nucala (Mepolizumab) gets European Approval for use in Three Additional Eosinophil-driven Diseases.