Natco Pharma has launched in India a fixed-dose combination of Trifluridine and Tipiracil, which is indicated for treatment of advanced colorectal and gastric cancers

In a regulatory filing, Natco Pharma announced the launch a novel fixed-dose combination of Trifluridine and Tipiracil under the brand name Tipanat as a pack of 20 tablets in a bottle. Tipanat is a novel antineoplastic nucleoside analog indicated for the treatment of advanced colorectal and gastric cancer.

In India, approximately 1,25,000 new cases of colorectal and gastric cancer cancers are reported every year. Tipanat is of high importance in not only extending the survival but also in preserving the quality of life in the late lines of treatment which is currently an unmet medical need. Natco said it is offering Tipanat at an affordable price.

In a separate press release, Natco Pharma announced that its marketing partner Breckenridge Pharmaceutical, Inc. has launched the everolimus tablets (generic for Afinitor) in the US market. According to industry sales data, the 10mg strength of Afinitor generated annual sales of $392 million during the twelve months ending July 2021. Everolimus is used to treat various types of cancer.

Trifluridine/tipiracil is a fixed-dose combination medication that is used as a third- or fourth-line treatment of metastatic colorectal cancer or gastric cancer, after chemotherapy and targeted therapeutics have failed. It is a combination of two active pharmaceutical ingredients: trifluridine, a nucleoside analog, and tipiracil, a thymidine phosphorylase inhibitor. Tipiracil prevents rapid metabolism of trifluridine, increasing the bioavailability of trifluridine. 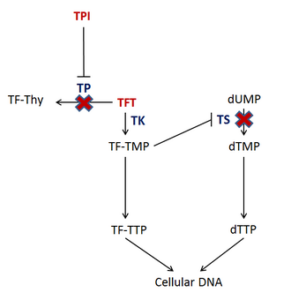 The drug consists of the cytotoxin trifluridine and the thymidine phosphorylase inhibitor (TPI) tipiracil. Trifluridine is incorporated into DNA during DNA synthesis and inhibits tumor cell growth. Trifluridine (TFT) is incorporated into DNA by phosphorylation by thymidylate kinase (TK) to TF-TMP; TF-TMP then covalently binds to tyrosine 146 of the active site of thymidylate synthase (TS) inhibiting the enzyme’s activity. TS is vital to the synthesis of DNA because it is an enzyme involved in the synthesis of the deoxynucleotide, thymidine triphosphate (dTTP). Inhibition of TS depletes the cell of dTTP and causes accumulation of deoxyuridine monophosphate (dUMP), which increases the likelihood that uracil gets misincorporated into the DNA. Also, subsequent phosphorylations of TF-TMP cause an increased level of TF-TTP within the cell, which results in it being incorporated into DNA. Even though the exact mechanism of how TFT causes DNA damage is not completely understood, it is hypothesized that the incorporation TF-TTP in DNA leads to DNA strand break formation

Tipiracil prevents the degradation of trifluridine via thymidine phosphorylase (TP) when taken orally and also has antiangiogenic properties.

Trifluridine and tipiracil may cause side effects.

Some side effects can be serious.

The combination severely suppresses bone marrow function, resulting in fewer red blood cells, white blood cells, and platelets, so many people taking it are at risk for infections, anemia, and blood loss from lack of clotting. It also causes digestive problems, with more than 10% of people experiencing loss of appetite, diarrhea, nausea, and vomiting. More than 10% of people experience fatigue and fever.

Between 1 and 10% of people have skin and mucosa issues, like rashes and itchiness, or mouth sores, as well as skin sloughing, numbness, redness, and swelling of their palms and soles. Dizziness and confusion are common as well.

Only in vitro interaction studies are available. In these, trifluridine used the concentrative nucleoside transporter 1 (CNT1) and equilibrative nucleoside transporters 1 (ENT1) and 2 (ENT2), and tipiracil was transported by the solute carrier proteins SLC22A2 and SLC47A1. Drugs that interact with these transporters could influence blood plasma concentrations of trifluridine and tipiracil. Trifluridine, being a thymidine phosphorylase inhibitor, could also interact with substrates of this enzyme such as zidovudine.

What is Colorectal Cancer?

A cancer of the colon or rectum, located at the digestive tract’s lower end.

Early cases can begin as non-cancerous polyps. These often have no symptoms but can be detected by screening. For this reason, doctors recommend screenings for those at high risk or over the age of 50.

Colorectal cancer symptoms depend on the size and location of the cancer. Some commonly experienced symptoms include changes in bowel habits, changes in stool consistency, blood in the stool and abdominal discomfort.

Colorectal cancer treatment depends on the size, location and how far the cancer has spread. Common treatments include surgery to remove the cancer, chemotherapy and radiation therapy.

What is Gastric cancer?

Gastric cancer is a disease in which malignant (cancer) cells form in the lining of the stomach.

Risk factors may include smoking and a diet of highly processed or salty foods.

There may be no symptoms of stomach cancer early on. Later, symptoms include feeling bloated after eating, feeling full after eating small amounts of food, nausea, heartburn or indigestion.

Natco Pharma is an Indian multinational pharmaceutical company based in Hyderabad, which makes finished dosage formulations and active pharmaceutical ingredients. It is the market leader in branded oncology medicines in India, and among the country’s top three producers of hepatitis C drugs.

Natco Pharma manufactures a comprehensive range of branded and generic dosage forms, bulk actives and intermediates for both Indian as well as International markets. The company’s consolidated net profit tumbled 68.1% to Rs 65.10 crore on a 53% drop in net sales to Rs 377.20 crore in Q2 FY22 over Q2 FY21.

Shares of Natco Pharma ended 0.8% lower at Rs 814.70 on Thursday. The domestic stock market is shut today on account of Guru Nanak Jayanti.