The federal government said on Friday that it will rescind three new contentious agri-laws that have enraged farmers throughout India for nearly a year. “Today, I want to inform everyone that we have decided to abolish all three agriculture laws,” Prime Minister Narendra Modi said in a national speech. 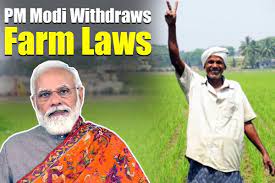 Opting to make the announcement on Guru Nanak Jayanti, Modi sought to strike an emotional chord as he urged farmers, who have been agitating at Delhi’s borders to return home to their farms and families. “Let us make a new beginning, let us start afresh,” he said.

What are these farm laws and what they provide for?

These laws are — The Farmers’ Produce Trade and Commerce (Promotion and Facilitation) Act, The Farmers (Empowerment and Protection) Agreement of Price Assurance and Farm Services Act, and The Essential Commodities (Amendment) Act. They had first come in the month of June as the three Ordinances before being approved by Parliament during the Monsoon Session by a voice vote.

The Farmers’ Produce Trade and Commerce (Promotion and Facilitation) Act provides for setting up a mechanism allowing the farmers to sell their farm produces outside the Agriculture Produce Market Committees (APMCs). Any licence-holder trader can buy the produce from the farmers at mutually agreed prices. This trade of farm produces will be free of mandi tax imposed by the state governments.

The Farmers (Empowerment and Protection) Agreement of Price Assurance and Farm Services Act allows farmers to do contract farming and market their produces freely.

The government has presented these laws as reforms akin to the 1991-opening of the Indian economy linking it with the globalized markets. It has argued that the three laws open up new opportunities for the farmers so that they can earn more from their farm produces.

The government has said the new laws will help to strengthen basic farm sector infrastructure through greater private investments. Successive governments have found financial constraints in investing in farm and rural infrastructure. It is argued that with food markets growing exponentially in India, private players would make agriculture profitable for the farmers.

But farmers are worried over MSP assurance.

The MSP assurance has emerged as the main sticking point in the farmers’ protest. There is an apprehension among the farmers that allowing outside-APMC trade of farm produces would lead to lesser buying by the government agencies in the approved mandis.

The protesting farmers say the new laws would thus make the MSP system irrelevant and they would not have any assured income from their farming. Right now, the government announces fixed MSP for around two dozen crops. However, paddy, wheat and some pulses are the ones that are procured by the government agencies at the APMC mandis.

The working of the MSP system has been such over the years that it benefits only a handful of farmers at all-India level. The Shanta Kumar committee set up by the Narendra Modi government in 2015 said only six per cent farmers benefit from the MSP regime.

The catch here is that for farmers of some states such as Punjab and Haryana, the MSP system has worked well. In these two states procurement of paddy and wheat range around 75-80 per cent.

So, the fear that the MSP system may crumble and get dismantled after the new farm laws are implement has become a very emotive issue for the farmers of Punjab and Haryana. And, that is why they are the ones who are most vocal in their protest against the farm laws and demanding that the MSP should be made mandatory for both APMC and private mandis.

Why is the government reluctant?

The MSP system is politically sensitive and financially unviable for the government. Some economists have called the MSP system of India one of the costliest government food procurement programmes in the world.

There are around 7,000 APMC mandis across the country from where the government agencies including the Food Corporation of India (FCI) purchase farm produces. However, in a practical sense, only the paddy and wheat are procured by the FCI and other agencies for the want of fund. The FCI sells these foodgrains to the Below Poverty Line (BPL) families through the Public Distribution System (PDS) at a concessionary rate. This is loss-making or welfare-oriented practice.

The MSPs have seen consistent increase making the FCI pay more for the farm produces and bear more losses as the PDS rates remain almost the same. Rising procurement by means the FCI godowns are overflowing, and rising MSP means that the FCI cannot sell its stocks in the international market at a profit. The government compensates the FCI for its losses, and at times sells foodgrains to some countries under an agreement.

The rising food bill under the existing MSP system of the government translates into pressure on the fiscal deficit in the annual budget. This is the reason why every government in the past several years has tried to find a way out.

Some states are unhappy with the new farm laws as it denies them the right to collect fees from outside-mandi trade of farm produces. The fee varies from 1-2 per cent to about 8-9 per cent in different states, which argue that they already have limited sources of revenue collection and are heavily dependent on the Centre for meeting their expenditure needs. This explains why states, particularly those ruled by the Opposition parties are supporter farmers’ protest over the new farm laws.

Timeline of the passage and protest over farm laws 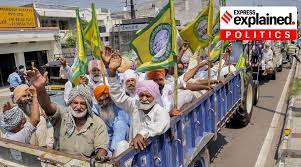 October 2020: Supreme Court hears petition challenging constitutional validity of the three laws and seeks Centre’ response. The petition filed by Congress and other opposition parties. Government calls farmer unions for conference on October 8, but the demand is rejected. The first round of talks is held on October 14

November 2020: Second round of talks held on November 13, but remain inconclusive. Farmers call for taking the protest on a bigger stage. A majority of protesters begin their “Dill Chalo” march on November 26, Constitution Day. A confrontation takes place with the Haryana Police but the farmers arrive on the outskirts of Delhi. On November 29, home minister Amit Shah appeals to protesting farmers to move to Burari so that talks can take place in a “structured” manner. Farmers reject Shah’s appeal the next day. 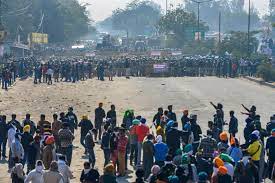 December 2020: Third, fourth and fifth round of talks take place between the government and farmers’ unions on December 1, 3 and 5 but fail to break the deadlock. Bharat Bandh is held on December 8, Shah hosts “informal” meet with farmers. Talks remain inconclusive and leaders decide not to come for December 9 talks. Farmers block the Delhi-Jaipur highway on December 13. The sixth round of talks finally takes place on December 30, consensus reached on two out of four demands of farmers. Impasse continues on legal assurance for Minimum Support Price (MSP) and total repeal of laws.

January 2021: Seventh and eighth round of talks take place but once again no resolution is found. The Supreme Court hears a clutch of pleas on January 11 challenging the laws. On January 12, implementation of farm laws stayed until further orders and a four-member committee formed to handle the negotiations. Farmers hold a tractor march in Delhi on Republic Day (January 26) to build pressure on the government to repeal the laws. Violence is reported in the march, and several policemen are injured.

February 2021: An online toolkit in support of farmers surfaces and the protest attracts the interest of international celebrities and activists like Rihanna and Greta Thunberg. Farmers hold a nationwide ‘Chakka Jam’ on February 6. Climate activist Disha Ravi is arrested on February 14 allegedly for creating and sharing the toolkit. She was granted bail on February 23. 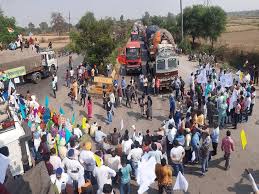 April 2021: Farmers’ protest continues even after 100 days. Some of the protesters return to Punjab ahead of the harvesting season, but others vow to continue the agitation.

July 2021: ‘Kisan Sansad’ begins at Jantar Mantar in Delhi, along with the monsoon session of Parliament. The farmers say they will keenly watch the discussions in Parliament on farm laws.

October 2021: Supreme Court talks about the inconvenience being faced by the commuters due to farmers’ protest. The Delhi Police starts removing barricades from Ghazipur and Tikri borders. The farmers, however, vow to continue with their agitation.

Incentives for sugar, cotton, and jute growers have...