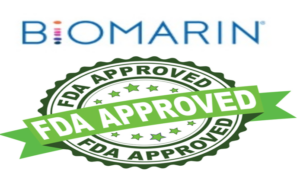 The U.S. Food and Drug Administration approved Voxzogo (vosoritide) injection to improve growth in children five years of age and older with achondroplasia and open epiphyses (growth plates), meaning these children still have the potential to grow. Achondroplasia is the most common form of dwarfism.

“This approval fulfills an unmet medical need for more than 10,000 children in the United States and underscores the FDA’s commitment to help make new therapies available for rare diseases,” said Theresa Kehoe, M.D., director of the Division of General Endocrinology in the FDA’s Center for Drug Evaluation and Research. “With this action, children with short stature due to achondroplasia have a treatment option that targets the underlying cause of their short stature.”

“Achondroplasia is a lifelong genetic condition resulting from the disordered skeletal architecture caused by impaired endochondral bone growth throughout childhood,” said Lynda Polgreen, M.D., an investigator in clinical trials for Voxzogo and an Investigator at The Lundquist Institute at Harbor-UCLA Associate Professor at David Geffen School of Medicine – UCLA.  “This approval is an important milestone representing the first time that physicians will be able to offer a therapy targeted at the root cause of the condition for families of children with achondroplasia aged five and older.”

“We applaud the FDA for recognizing the urgent unmet medical need for this progressive condition. As a parent of a child with achondroplasia, I see the availability of treatments that impact bone growth as an important step forward,” said Amer Haider Co-Founder of Growing Stronger, an organization with a mission to improve the quality of medical care for little people through supporting research. The organization raises nonprofit donations that are granted to researchers focused on dwarfism.

Mr. Haider added, “BioMarin continues to support the achondroplasia community and has a long track record of advancing the standard of care in rare genetic conditions.”

With this approval, the FDA also issued a Rare Pediatric Disease Priority Review Voucher (PRV), which confers priority review to a subsequent drug application that would not otherwise qualify for priority review.  The rare pediatric disease PRV program is designed to encourage development of new drugs and biologics for the prevention or treatment of rare pediatric diseases.

Voxzogo is expected to be available in the United States by mid- to late-December, and BioMarin will begin the promotion of Voxzogo immediately.

Voxzogo’s safety and efficacy in improving growth were evaluated in a year-long, double-blind, placebo-controlled, phase 3 study in participants five years and older with achondroplasia who have open epiphyses. In the study, 121 participants were randomly assigned to receive either Voxzogo injections under the skin or a placebo. Researchers measured the participants’ annualized growth velocity, or rate of height growth, at the end of the year. Participants who received Voxzogo grew an average 1.57 centimeters taller compared to those who received a placebo.

The FDA approved Voxzogo under the accelerated approval pathway, which allows for earlier approval of drugs that treat serious conditions and fill an unmet medical need, based on a surrogate or intermediate clinical endpoint. A condition of this accelerated approval is a post-marketing study that will assess final adult height. This application also received priority review designation.

The FDA granted the approval of Voxzogo to BioMarin.

Vosoritide is an analog of CNP with proline-glycine on its N-terminus to convey resistance to neutral endopeptidase. It was approved for use under the brand name Voxzogo (BioMarin Pharmaceutical Inc.) in the EU in August 2021 and the US in November 2021, becoming the first pharmacological intervention approved for the treatment of achondroplasia in both region. 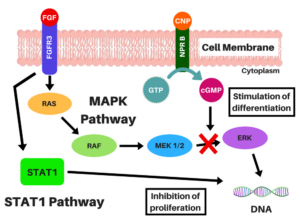 Vosoritide works by binding to a receptor (target) called natriuretic peptide receptor type B (NPR-B), which reduces the activity of fibroblast growth factor receptor 3 (FGFR3). FGFR3 is a receptor that normally down-regulates cartilage and bone growth when activated by one of the proteins known as acidic and basic fibroblast growth factor. It does so by inhibiting the development (cell proliferation and differentiation) of chondrocytes, the cells that produce and maintain the cartilaginous matrix which is also necessary for bone growth. Children with achondroplasia have one of several possible FGFR3 mutations resulting in constitutive (permanent) activity of this receptor, resulting in overall reduced chondrocyte activity and thus bone growth.

Although relatively well-tolerated, transient episodes of hypotension have been observed in clinical studies. Patients with pre-existing cardiovascular disease and those taking antihypertensive medications were excluded from clinical trials. The risk of hypotension may be reduced by ensuring adequate food and fluid intake prior to the administration of vosoritide. The use of vosoritide in patients with an eGFR <60 mL/min/1.73m2 should also be avoided as there are no data on the influence of renal impairment on its pharmacokinetics.

The protein C-type natriuretic peptide (CNP), naturally found in humans, reduces the effects of over-active FGFR3. Vosoritide is a CNP analogue with the same effect but prolonged half-life, allowing for once-daily administration

VOXZOGO is a prescription medicine used to increase linear growth in children with achondroplasia who are 5 years of age and older with open growth plates (epiphyses).

It is not known if VOXZOGO is safe and effective in children with achondroplasia under 5 years of age.

VOXZOGO is approved under accelerated approval based on an improvement in annualized growth velocity. Continued approval may be contingent upon verification and description of clinical benefit in confirmatory trials.

The most important safety information about VOXZOGO:

VOXZOGO is taken daily as an injection given under the skin, administered by a caregiver after a healthcare provider determines the caregiver is able to administer VOXZOGO. Do not try to inject VOXZOGO until you have been shown the right way by your healthcare provider. VOXZOGO is supplied with Instructions for Use that describe the steps for preparing, injecting, and disposing VOXZOGO. Caregivers should review the Instructions for Use for guidance and any time they receive a refill of VOXZOGO in case any changes have been made.

Inject VOXZOGO 1 time every day, at about the same time each day. If a dose of VOXZOGO is missed, it can be given within 12 hours from the missed dose. After 12 hours, skip the missed dose and administer the next daily dose as usual.

The dose of VOXZOGO is based on body weight. Your healthcare provider will adjust the dose based on changes in weight following regular check-ups.

Safety and Efficacy of Voxzogo:

Safety and efficacy of Voxzogo in patients with achondroplasia were assessed in one 52–week, multi–center, randomized, double–blind, placebo–controlled, Phase 3 study.  Transient decreases in blood pressure have been observed with Voxzogo. In the clinical study, 8 (13%) of 60 patients treated with Voxzogo had a total of 11 events of transient decreases in blood pressure compared to 3 (5%) of 61 patients on placebo, over a 52-week treatment period. Patients with significant cardiac or vascular disease or on anti-hypertensive medicine were excluded from the trial.  To reduce the risk of a decrease in blood pressure and associated symptoms (dizziness, fatigue and/or nausea), patients should be well hydrated and have adequate food intake prior to administration.

Achondroplasia, the most common form of skeletal dysplasia leading to disproportionate short stature, is characterized by slowing of endochondral bone growth, which results in disproportionate short stature and disordered architecture in the long bones, spine, face and base of the skull.  This condition is caused by a gain of function mutation in the fibroblast growth factor receptor 3 gene (FGFR3), a negative regulator of bone growth.  More than 80% of children with achondroplasia have parents of average stature and have the condition as the result of a spontaneous change in the gene.

The worldwide incidence rate of achondroplasia is about one in 25,000 live births. Voxzogo is being studied in children whose growth plates are still “open,” typically those under 18 years of age. This is approximately 25% of people with achondroplasia.  In Latin America, the Middle East, and most of Asia Pacific, there are currently no licensed medicines for achondroplasia.

BioMarin is a global biotechnology company that develops and commercializes innovative therapies for patients with serious and life-threatening rare genetic diseases. The company’s portfolio consists of seven commercialized products