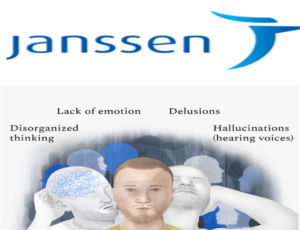 “With only two injections per year, 6-monthly paliperidone palmitate has the potential to reduce the burden of taking medication frequently, giving eligible patients the opportunity to focus on other aspects of their life,” said Ludovic de Beaucoudrey, Ph.D., EMEA Therapeutic Area Lead, Janssen-Cilag. “This Positive Opinion from the CHMP underscores Janssen’s 60-year commitment to transforming the lives of people living with schizophrenia through rigorous scientific research and product development.”

The European Commission approval is based on the Route 6 Study, a randomised, double-blind, non-inferiority Phase 3 global study designed to demonstrate that PP6M is not less effective than PP3M for the prevention of relapse in participants previously stabilised on a shorter-acting formulation of paliperidone palmitate. The study enrolled 702 adults living with schizophrenia from 20 countries, including Bulgaria, Czech Republic, France, Hungary, Italy, Poland, Russia, Spain and Turkey. The results showed non-inferiority of PP6M compared with PP3M on the primary endpoint of time to first relapse at the end of the 12-month period. Results found that 92.5 percent of patients treated with PP6M and 95.1 percent treated with PP3M were relapse-free at 12 months. Relapse was defined as psychiatric hospitalisation, increase in Positive and Negative Syndrome Scale (PANSS) total score, increase in individual PANSS item scores, violent behaviour resulting in self-injury or suicidal/homicidal ideation.

“When it comes to the treatment of schizophrenia, unmet needs remain, including treatment adherence concerns, despite currently available therapies,” said Bill Martin, Ph.D., Global Therapeutic Area Head, Neuroscience, Janssen Research & Development, LLC. “The Positive Opinion received from the CHMP today, enables us to rethink how we manage this chronic disease and brings us one step closer to offering patients and caregivers the potential for a life less defined by medication.”

“Non-adherence to prescribed drug treatments has been recognised as a challenge for treatment continuity that can potentially have a negative impact on treatment outcomes,” said Professor Silvana Galderisi,* Route 6 Study Investigator and Professor of Psychiatry and Director of the Emergency Unit of the Department of Mental Health at the University of Campania Luigi Vanvitelli, Italy. “It is therefore essential to provide a variety of treatment options to meet different patient needs. If approved by the European Commission, PP6M’s extended dosing interval may help address a key unmet need within this population.”

Following this Positive CHMP Opinion, the European Commission will now consider approval of a marketing authorisation for PP6M as a long-acting injectable maintenance treatment for adults with schizophrenia who are clinically stable on 1‑monthly or 3‑monthly paliperidone palmitate injectable products. The European Commission has the authority to grant marketing authorisation for medicines in the European Economic Area.

The Route 6 Study was a randomised, double-blind, non-inferiority global Phase 3 study of 702 adults (ages 18–70) with schizophrenia, designed to demonstrate that injection cycles consisting of a single administration of PP6M (700 or 1000 mg) are not less effective than two sequentially administered injections of PP3M (350 or 525 mg) for the prevention of relapse in subjects with schizophrenia previously stabilised on corresponding doses of PP1M (100 or 150 mg) or PP3M (350 or 525 mg).

Long-acting injectables (LAIs) allow for the slow release of a drug into the blood and have been on the market for more than 50 years. LAI antipsychotics have been demonstrated to offer a number of advantages compared with oral medication, including not having to remember to take drugs daily, improved patient outcomes, improved patient and physician satisfaction, and lower relapse rates.

Paliperidone is chemically 3-{2-[4-(6-fluoro-1,2-benzoxazol-3-yl)piperidin-1-yl]ethyl}-2-methyl-4-oxo-6,7,8,9-tetrahydropyrido[1,2-a]pyrimidin-9-yl hexadecanoate is a fatty acid ester obtained by the formal condensation of the carboxy group of hexadecanoic acid with the hydroxy group of 3-{2-[4-(6-fluoro-1,2-benzoxazol-3-yl)piperidin-1-yl]ethyl}-9-hydroxy-2-methyl-6,7,8,9-tetrahydropyrido[1,2-a]pyrimidin-4-one. It is a member of 1,2-benzoxazoles, a heteroarylpiperidine, an organofluorine compound, a pyridopyrimidine and a fatty acid ester.

Paliperidone, sold under the trade name Invega among others, is an atypical antipsychotic. It is mainly used to treat schizophrenia and schizoaffective disorder.

Paliperidone is the primary active metabolite of the older antipsychotic risperidone. While its specific mechanism of action is unknown, it is believed paliperidone and risperidone act via similar, if not identical, pathways. Its efficacy is believed to result from central dopaminergic and serotonergic antagonism. Food is known to increase the absorption of Invega type ER OROS prolonged-release tablets. Food increased exposure of paliperidone by up to 50-60%, however, half-life was not significantly affected. The effect was probably due to a delay in the transit of the ER OROS formulation in the upper part of the GI channel, resulting in increased absorptio

Schizophrenia is a chronic and severe brain disorder affecting approximately 20 million people worldwide and an estimated 3.7 million people in the EU. The disease is characterised by distortions in thinking, perception, emotions, language, sense of self and behaviour leading to neurological impairment, severe disability and increased mortality.

Antipsychotic medication is recognised as an essential component in the treatment of schizophrenia, and adherence to medication plays a critical role in preventing symptoms and relapses. Early intervention in schizophrenia may improve patient outcomes as more than 69 percent of people with schizophrenia do not receive appropriate care.

About the Janssen Pharmaceutical Companies of Johnson & Johnson:

At Janssen, we’re creating a future where disease is a thing of the past. We’re the Pharmaceutical Companies of Johnson & Johnson, working tirelessly to make that future a reality for patients everywhere by fighting sickness with science, improving access with ingenuity, and healing hopelessness with heart. We focus on areas of medicine where we can make the biggest difference: Cardiovascular & Metabolism, Immunology, Infectious Diseases & Vaccines, Neuroscience, Oncology, and Pulmonary Hypertension.