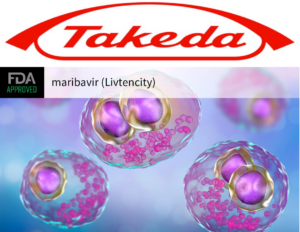 “This announcement redefines the management of post-transplant CMV with the approval of the first and only treatment for transplant patients with CMV that is refractory with or without resistance, a significantly underserved and vulnerable patient community,” said Ramona Sequeira, President, U.S. Business Unit and Global Portfolio Commercialization, Takeda Pharmaceutical Company Limited. “People undergoing transplants have a lengthy and complex healthcare journey; with the approval of this treatment, we’re proud to offer these individuals a new oral antiviral to fight CMV infection and disease. We are grateful for the contributions of the patients and clinicians who participated in our clinical trials, as well as the dedication of our scientists and researchers.”

LIVTENCITY is a new molecular entity which targets CMV at pUL97, resulting in inhibition of viral DNA replication, encapsidation and nuclear egress. Though a rare disease overall, CMV is one of the most common infections experienced by transplant recipients, with an estimated incidence rate of around 16%–56% in solid organ transplant (SOT) recipients and 30%–70% in hematopoietic stem cell (HSCT) transplant patients. CMV can be acquired or reactivated following transplant leading to serious consequences—including loss of the transplanted organ and failure of the graft—or loss of life. In patients with compromised immunity, CMV causes clinically challenging complications that can be fatal.

LIVTENCITY will be available in the coming days. For appropriate patients, physicians can submit a prescription to initiate access to treatment by contacting Takeda Patient Support at 1-855-268-1825.

Prior to FDA approval, LIVTENCITY (Maribavir) was granted Orphan Drug Designation by the FDA for treatment of clinically significant CMV viremia and disease in at-risk patients, as well as Breakthrough Therapy Designation as a treatment for CMV infection and disease in transplant patients resistant or refractory to prior therapy. Takeda is looking forward to continuing our discussions with regulatory agencies across the globe to potentially bring maribavir to patients worldwide. The company is also investigating maribavir as a first-line treatment of CMV in hematopoietic stem cell transplant recipients in an ongoing Phase 3 clinical trial.

LIVTENCITY was evaluated in the TAK-620-303 (SOLSTICE) trial, a global, multicenter, randomized, open-label, active-controlled superiority trial assessing the efficacy and safety of treatment with either maribavir or investigator-assigned treatment (IAT, conventional antiviral therapy) in 352 HSCT and SOT adult recipients with CMV infection refractory, with or without or resistance, to one or a combination of conventional antiviral therapies: ganciclovir, valganciclovir, foscarnet, or cidofovir. Participants were randomized 2:1 to receive maribavir (N=235) (400 mg, twice daily) or IAT (N=117) (as dosed by the investigator) for up to 8-weeks. After completion of the treatment period, subjects entered a 12-week follow-up phase. The primary efficacy endpoint was confirmed CMV DNA level <LLOQ* (lower limit of quantification, [i.e. <137 IU/mL] as assessed by COBAS® AmpliPrep/COBAS® TaqMan® CMV test at the end of Week 8).

The most common adverse events occuring in all grades, >10% of patients receiving Maribavir were tasted disturbance, nausea, diarrhea, vomiting, and fatigue. A higher proportion of subjects in the IAT group discontinued study medication due to an adverse event compared to the LIVTENCITY group (32%, n=37/116 versus 13%, n=31/234, respectively). Taste disturbance events (46%, n=108/234) were generally mild, and rarely led to discontinuation of Maribavir (1%). In 37% of patients, these events resolved while patients remained on therapy (median duration 43 days; range 7 to 59 days). For the patients with ongoing taste disturbance after drug discontinuation, resolution occurred in 89%.1 In patients with resolution of symptoms after drug discontinuation, the median duration of symptoms off treatment was 6 days (range 2 to 85 days). All-cause mortality was similar in each treatment group (LIVTENCITY 11%, n=27/235; IAT 11%, n=13/117).

The TAK-620-303 (SOLSTICE) trial (NCT02931539) was a multicenter, randomized, open-label, active-controlled superiority trial to assess the efficacy and safety comparing treatment with either LIVTENCITY (Maribavir) or investigator assigned treatment, IAT, (conventional antiviral therapy) in 352 hematopoietic stem cell transplant and solid organ transplant recipients with CMV infection refractory, with or without resistance, to one or a combination of the conventional antiviral therapies: ganciclovir, valganciclovir, foscarnet or cidofovir. Adult patients underwent a 2-week screening period, followed by randomization 2:1 to LIVTENCITY (Maribavir) (n=235) (400 mg, twice daily) or IAT (n=117) (as dosed by the investigator) for up to 8-weeks. After completion of the treatment period, subjects entered a 12-week follow-up phase.

The trial’s primary endpoint was confirmed CMV DNA level <LLOQ (lower limit of quantification, [i.e. <137 IU/mL] in 2 consecutive samples separated by at least 5 days as assessed by COBAS® AmpliPrep/COBAS® TaqMan® CMV test at the end of Week 8). The key secondary endpoint was CMV DNA level <LLOQ and CMV infection symptom control at the end of Study Week 8 with maintenance of this treatment effect through Study Week 16.

CMV is a beta herpesvirus that commonly infects humans; serologic evidence of prior infection can be found in 40%-100% of various adult populations. CMV typically resides latent and asymptomatic in the body but may reactivate during periods of immunosuppression. Serious disease may occur in individuals with compromised immune systems, which includes patients who receive immunosuppressants associated with various types of transplants including hematopoietic stem cell transplant (HSCT) or solid organ transplant (SOT). Out of the estimated 200,000 adult transplants per year globally, CMV is one of the most common viral infections experienced by transplant recipients, with an estimated incidence rate between 16-56% in SOT recipients and 30-70% in HSCT recipients.

In transplant recipients, reactivation of CMV can lead to serious consequences including loss of the transplanted organ and, in extreme cases, can be fatal. Existing therapies to treat post-transplant CMV infections may demonstrate serious side effects that require dose adjustments or may fail to adequately suppress viral replication. Additionally, existing therapies may require or prolong hospitalization due to administration.

LIVTENCITY (Maribavir), an orally bioavailable anti-CMV compound, is the first and only antiviral agent that targets and inhibits the pUL97 protein kinase and its natural substrates. It is approved in the U.S. for the treatment of adults and pediatric patients (12 years of age or older and weighing at least 35 kg) with post-transplant cytomegalovirus (CMV) infection/disease that is refractory to treatment (with or without genotypic resistance) with Ganciclovir, Valganciclovir, Cidofovir or Foscarnet.

Maribavir is part of a new class of anti-cytomegalovirus (CMV) , benzimidazole ribosides, that inhibit viral DNA assembly and inhibit egress of viral capsids from the nucleus of infected cells. Maribavir is active in vitro against strains of CMV that are resistant to commonly used anti-CMV drugs. [ViroPharma] Maribavir inhibits the human CMV UL97 viral protein kinase which prevents the virus from encapsulating and leaving infected cells.

LIVTENCITY is indicated for the treatment of adults and pediatric patients (12 years of age and older and weighing at least 35 kg) with post-transplant cytomegalovirus (CMV) infection/disease that is refractory to treatment (with or without genotypic resistance) with ganciclovir, Valganciclovir, Cidofovir or Foscarnet.

Virologic failure due to resistance can occur during and after treatment with LIVTENCITY. Virologic relapse during the posttreatment period usually occurred within 4-8 weeks after treatment discontinuation. Some Maribavir pUL97 resistance-associated substitutions confer cross-resistance to ganciclovir and Valganciclovir. Monitor CMV DNA levels and check for Maribavir resistance if the patient is not responding to treatment or relapses.

Risk of Adverse Reactions or Loss of Virologic Response Due to Drug Interactions:

Maribavir is primarily metabolized by CYP3A4. Drugs that are strong inducers of CYP3A4 are expected to decrease Maribavir plasma concentrations and may result in reduced Virologic response; therefore, coadministration of LIVTENCITY with these drugs is not recommended, except for selected anticonvulsants.

Maribavir Use With Immunosuppressant Drugs:

The most common adverse events (all grades, >10%) in subjects treated with LIVTENCITY were taste disturbance, nausea, diarrhea, vomiting, and fatigue.

Maribavir is licensed by ViroPharma from GlaxoSmithKline in 2003, for the prevention and treatment of human cytomegalovirus (HCMV) disease in hematopoietic stem cell/bone marrow transplant patients. The mechanism by which Maribavir inhibits HCMV replication is by inhibition of an HCMV encoded protein kinase enzyme called UL97 or pUL97. Maribavir showed promise in Phase II clinical trials and was granted fast track status, but failed to meet study goals in a Phase III trial. However, the dosage used in the Phase III trial may have been too low to be efficacious.

A Phase II study with Maribavir demonstrated that prophylaxis with Maribavir displayed strong antiviral activity, as measured by statistically significant reduction in the rate of reactivation of CMV in recipients of hematopoietic stem cell/bone marrow transplants. In an intent-to-treat analysis of the first 100 days after the transplant, the number of subjects who required pre-emptive anti-CMV therapy was statistically significantly reduced with Maribavir compared to placebo.

ViroPharma conducted a Phase III clinical study to evaluate the prophylactic use for the prevention of cytomegalovirus disease in recipients of allogeneic stem cell transplant patients. In February 2009, ViroPharma announced that the Phase III study failed to achieve its goal, showing no significant difference between Maribavir and a placebo at reducing the rate at which CMV DNA levels were detected in patients.

The safety and efficacy of Maribavir were evaluated in Phase III, multicenter, open-label, active-controlled trial that compared Maribavir with a treatment assigned by a researcher running the study, which could include one or two of the following antivirals used to treat cytomegalovirus: ganciclovir, valganciclovir, foscarnet, or cidofovir. In the study, 352 transplant recipients with cytomegalovirus infections who did not respond (with or without resistance) to treatment randomly received Maribavir or treatment assigned by a researcher for up to eight weeks. The study compared the two groups’ plasma cytomegalovirus DNA concentration levels at the end of the study’s eighth week, with efficacy defined as having a level below what is measurable. Of the 235 participants who received maribavir, 56% had levels of cytomegalovirus DNA below what was measurable versus 24% of the 117 participants who received an investigator-assigned treatment.

The U.S. Food and Drug Administration (FDA) granted the application for Maribavir breakthrough therapy and priority review designations. The FDA granted the approval of Livtencity to Takeda Pharmaceuticals Company Limited.

Takeda Pharmaceutical Company Limited is a global, values-based, R&D-driven biopharmaceutical leader headquartered in Japan, committed to discover and deliver life-transforming treatments, guided by our commitment to patients, our people, and the planet. Takeda focuses its R&D efforts on four therapeutic areas: Oncology, Rare Genetics and Hematology, Neuroscience, and Gastroenterology (GI). We also make targeted R&D investments in Plasma-Derived Therapies and Vaccines. We are focusing on developing highly innovative medicines that contribute to making a difference in people’s lives by advancing the frontier of new treatment options and leveraging our enhanced collaborative R&D engine and capabilities to create a robust, modality-diverse pipeline. Our employees are committed to improving quality of life for patients and to working with our partners in health care in approximately 80 countries.