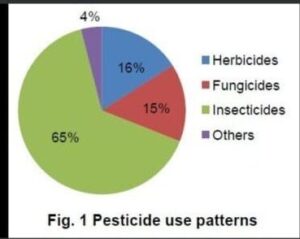 Agrochemicals or agrichemicals is a contraction of agricultural chemical. It is a chemical product that is used in agriculture to increase the output from the land. In various cases, agrichemical refers to pesticides, including fungicides, insecticides, and herbicides

India is the fourth largest producer of agrochemicals in the world after the USA, Japan and China. The agrochemical industry is a significant industry for the Indian economy. India’s agrochemicals market grew at a rate of 11% from $ 1.22 billion in fiscal 2008 to an estimated $ 1.36 billion in fiscal 2009. India’s agrochemicals consumption is one of the lowest in the world with a consumption of just 0.58kg per Hectares compared to the US (4.5 kg / ha) and Japan (11 kg / ha). In India, rice accounts for the highest share of pesticide consumption with around 28%, followed by cotton (20%). The Indian population is growing and the land area per capita is falling, the use of pesticides in India must be further improved. In addition to increasing domestic consumption, India’s agrochemical industry’s exports could double over the next four years if the industry adopts appropriate strategies and sophisticated technologies.

There are around 125 technical grade manufacturers (10 multinational companies), 800 formulators and over 145,000 distributors in India. 60 technical pesticides are produced locally. Technical quality manufacturers sell high purity chemicals in bulk (generally in drums of 200-250 kg) to formulators. In turn, formulators create formulations by adding inert carriers, solvents, surfactants, deodorants, etc. These formulations are packaged for retail and purchased by farmers. The Indian agrochemicals market is characterized by low capacity utilization. The total installed capacity in fiscal year 2009 was 146,000 tons and the total production was 85,000 tons, resulting in a low capacity utilization of 58%. The industry suffers from high inventory levels (due to seasonal and irregular demand due to the monsoons) and long loan periods for farmers, which makes working capital intense.

India is a net exporter of pesticides to countries such as the US and some European and African countries because of its inherent strength in low cost manufacturing and a skilled, low cost labor force. Exports accounted for ~ 50% of total industry sales in FY08 and reached a Compounded Annual Growth Rate (CAGR) of 29% from FY04 to FY08.

Increase in strategic alliances among large players for greater market reach and acquisitions of smaller companies globally to diversify product portfolio. For example: Rallis has a marketing alliance for key products with FMC,  Syngenta, Bayer and Nihon  . In addition, UPL has had a series of small acquisitions globally to enter new geographies and gain product expertise.

The Asia Pacific region gives domestic as well as international companies a place to grow within the region. After the revival of the economy and the stabilization of regional currency rates, the farmers are now focusing on investing in these crop-protecting and growth-boosting chemicals. India, along with China and Japan, exhibits the largest agrochemical markets of the Asia Pacific region. At present, China is dominating the market with its developing agricultural sector, in confluence with the need for its growing population. Globally, the country is the largest producer as well as the largest consumer of fertilizers. 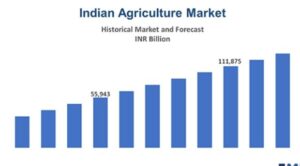 As the demand for food products is increasing, the landmass available for agriculture is gradually decreasing due to the heightened effect of urbanization, which is providing an impetus for the farmers to use different agrochemicals to increase land productivity and maintain soil health. The positive trend and the integrating farming practices in the country are expected to propel the industry growth rate of agrochemicals in India within the forecast period. However, the market may find hindrance due to low awareness of the benefits of agrochemicals among the farming community, and their low acceptance of the modern-day farming practices.

The report gives a detailed analysis of the key players in the agrochemicals industry in India, covering their competitive landscape, capacity, and latest developments like mergers, acquisitions, and investments, expansions of capacity, and plant turnarounds. The comprehensive EMR report provides an in-depth assessment of the industry based on the Porter’s five forces model along with giving a SWOT analysis.

In Brazil, Corteva Agriscience has released a new...