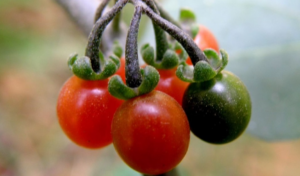 Noticing the unknown plant that grew abundantly in the backyard of my ancestral house, I used to wonder what it was used for. It grew everywhere like a weed but was mostly used by me in my pretend cooking games as a kid.

Back then, we were all forced by our grandparents to eat such home-grown herbs. However, little did I know that its uses were far more important.

The herb grows like bougainvillea in Kerala but still goes unnoticed. On the other hand, the neighbouring state of Tamil Nadu cultivates it on a large scale and consumes it as a staple. The delicious Manathakkali Vatha Kuzhambu is quite popular among Tamilians.

Senior scientist at the RGCB, Dr Ruby John Anto and her student Dr Lekshmi R Nath found that the leaves of Manathakkali contained the qualities to save human liver from the uncontrolled growth of cells.

The US Food and Drug Administration (FDA) has now noticed its potential and sees a compound that can be isolated from the plant and used to treat liver cancer, as per the New Indian Express. According to Dr Ruby John Anto, there is only one FDA-approved drug available for liver cancer treatment whose effectiveness is much lower than this one.The medicine made from the compound of Manathakkali leaves has already received patented rights by the USA, Canada, Japan and South Korea. The patented technology of the two scientists has been bought by the US pharma company QBioMed, as per Onmanorama.

Other than its cancer treating properties, Manthakkali is rich in calcium, iron, riboflavin and Vitamin C. It is known to cure mouth ulcers, constipation and urinary infections.

Another advantage of the herb is that it is available all-year round. Manathakkali is a Tamil word and it is known by different names in Kerala like Mulakuthakkali or Karinthakkali.

On Target Laboratories has received FDA Approval for the Injectable CYTALUXTM (Pafolacianine) for the Detection of Ovarian Cancer during Surgery.

The seed banker: This Nuapatna farmer strives to...

ICAR to research on, demonstrate and promote Natural...