Amgen Wins its Second Patent of the year, Delaying Samsung’s Enbrel Biosim until 2029.

The U.S. District Court for the District of New Jersey sided with Amgen, Roche and Immunex in their bid to keep Samsung Bioepis’ Enbrel biosimilar, Eticovo, off the U.S. market until nearly the end of the decade. In documents filed last month, the court held that Samsung would infringe two Enbrel patents if it tried to sell its copycat before 2029, when the patents expire.

The update marks the second patent setback for an Enbrel biosimilar this year. The first came for Erelzi, made by Novartis’ generics unit Sandoz. In May, the Supreme Court shot down Sandoz’s petition to review earlier decisions that had favored Amgen. As in Samsung’s case, that decision pushed Sandoz’s biosimilar launch to 2029 at the earliest.

With the latest judgment, Samsung Bioepis won’t be able to make, sell or import its drug in the U.S. before 2029. The court also ordered Samsung to “immediately destroy any remaining Bioepis Etanercept product that has been imported into the United States.” Etanercept is the generic name for Enbrel, a tumor necrosis factor-inhibitor used to treat rheumatoid arthritis, ankylosing spondylitis and more. 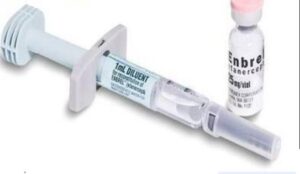 Enbrel was first approved back in 1998, meaning it will have enjoyed 31 years of U.S. exclusivity by the time Samsung and Sandoz’s biosimilars hit the scene, the American Journal of Managed Care’s Center for Biosimilars notes.

The Biologics Price Competition and Innovation Act of 2009 awards new biologics 12 years of exclusivity from the time of FDA approval, the Center for Biosimilars added. Problem is, Erelzi was approved in 2016 and Eticovo in 2019. Patent litigation has kept them off the market since, as the exclusivity clock continues to tick down.

Most of Enbrel’s sales are based in the U.S. Worldwide, the drug generated $4.99 billion in 2020, with $4.85 billion of that coming from the U.S. Pfizer markets the drug in Europe, where Samsung, Sandoz and Viatris sell biosimilar versions.

For Sandoz, the generic drugmaker’s failed Supreme Court bid followed back-to-back losses in court. In 2019, a federal district judge in New Jersey sided with Amgen, upholding several patented claims that Sandoz had challenged. The Novartis unit appealed, but in 2020, the U.S. Court of Appeals for the Federal District upheld the lower court’s decision.

Sandoz has said an Enbrel Biosim could save the U.S. about $1 billion per year.

Biogen Suffers Yet Another Setback as an Appeal for the Tecfidera Patent is Denied.

ZyCoV-D will be offered in seven states at first.