Novartis is bracing for several losses of market exclusivity in the next five years, most notably for the company’s second-best-selling drug, Entresto. To hear CEO Vas Narasimhan tell it, the Swiss pharma is advancing more than enough programs to cushion the generics impact and drive growth in the long run, with or without acquisitions.

Generics to heart failure drug Entresto, Roche-shared eye therapy Lucentis and other drugs could leave a $9 billion hole in Novartis’ topline in 2026 compared with 2020 revenues. Still, the company expects to grow sales by at least 4% on average annually during the period, Narsimhan said during an investor event Thursday. 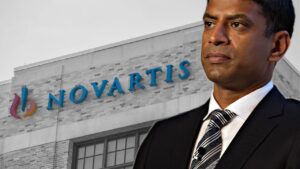 Entresto is expected to face U.S. copycat competition in 2025. Thanks to a recent FDA nod for heart failure patients with left ventricular ejection fraction below normal, Novartis has dialed up the drug’s peak sales estimate to above $5 billion.

The drugmaker is also hoping to repurpose its autoinflammatory disease treatment canakinumab for postsurgery adjuvant treatment of non-small cell lung cancer. That program is in phase 3, along with the potential adjuvant use of Kisqali in breast cancer. Further, Novartis is in late-stage testing for an intrathecal version of gene therapy Zolgensma in older spinal muscular atrophy patients.

All of the estimates come from Novartis’ existing projects. Still, a lot of the talk around Novartis these days is about how the company plans to spend the $20.7 billion cash from the sale of its longtime stake in Swiss rival Roche.

Novartis management is talking to key shareholders to gain their input, with a decision on the capital allocation expected in the coming months, Narasimhan said at the event. Half of investors are currently rooting for a big round of share buybacks, while others are urging the company to invest in bolt-on acquisitions, finance chief Harry Kirsch said. While Kirsch wouldn’t give a specific range of size for his definition of “bolt-on,” he did indicate that Novartis won’t go after large M&A deals.

Novartis International AG is an American – Swiss multinational pharmaceutical corporation based in Basel, Switzerland and Cambridge, Massachusetts, United States. It is one of the largest pharmaceutical companies in the world.

In March 1996, Ciba-Geigy merged with Sandoz; the pharmaceutical and agrochemical divisions of both companies formed Novartis as an independent entity. Other Ciba-Geigy and Sandoz businesses were sold, or, like Ciba Specialty Chemicals, spun off as independent companies. The Sandoz brand disappeared for three years, but was revived in 2003 when Novartis consolidated its generic drugs businesses into a single subsidiary and named it Sandoz. Novartis divested its agrochemical and genetically modified crops business in 2000 with the spinout of Syngenta in partnership with AstraZeneca, which also divested its agrochemical business.

ZyCoV-D will be offered in seven states at first.