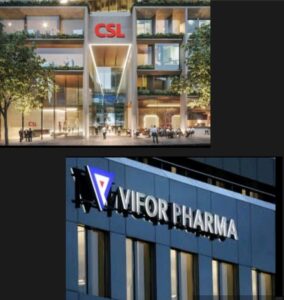 Australian biotech giant CSL is negotiating with Vifor Pharma Group to acquire the Swiss company for A$10 billion ($7.1 billion), says the Australian Financial Review. The acquisition would become the largest ever for CSL.

The companies were in talks in March, the Australian publication reported, but the talks have now become more serious. The report comes less than six month after Abbas Hussain left the board at CSL to become the CEO of Vifor, an 88-year-old specialty pharmaceutical company.

Vifor markets iron deficiency, nephrology and cardio-renal products in more than 100 countries worldwide, its website says. Addressing “market speculations” Thursday, the company said it “systematically reviews options that can strengthen its market position and/or accelerate the growth of the company both organically and through partnerships and acquisitions.”

“Vifor Pharma is therefore regularly in discussions with other market participants and does not comment on them,” the company added.

CSL, which has no rivals as Australia’s largest company in the biopharma industry, has made several major acquisitions over the last few decades. Its $275 million purchase of Novartis’ flu vaccine business in 2014 help build CSL’s Seqirus into one of the top flu shot players in the world.

Beyond that, its buyouts of Florida-based Nabi and Zentrallaboratorium twenty years ago helped make CSL the world’s premier plasma collection company. A $965 million buy of Aventis Behring in 2003 helped broaden CSL’s product portfolio.

CSL was founded in 1916 as the Commonwealth Serum Laboratories, an Australian government body focused on vaccine manufacture. Under the first director, William Penfold, CSL commenced operation in the vacant Walter and Eliza Hall Institute building at the Royal Melbourne Hospital in 1918, before moving to its purpose-built Parkville premises in the following year.

In 2017, Vifor Pharma Group was listed (ticker symbol VIFN) on the Swiss Stock Exchange (SIX) after splitting up the former Galenica Group. This was completed through an initial public offering (IPO) of Galenica Santé (listed as GALE).

Vifor Pharma Group is present in North and South America, Europe, the Middle East and Asia Pacific and works with over 100 partners all around the world.