-Ahead of its New Year’s Day decision deadline at the FDA, Xeris Biopharma has snagged an approval for Recorlev, a drug formerly known as levoketoconazole.

Based on results from phase 3 studies called SONICS and LOGICS, the FDA approved the drug for adults with Cushing’s syndrome. Xeris picked up Recorlev earlier this year in its acquisition of rare disease biotech Strongbridge Biopharma. It’s planning to launch in the first quarter of 2022.

Recorlev’s approval covers the treatment of endogenous hypercortisolemia in adults with Cushing’s syndrome who aren’t eligible for surgery or haven’t responded to surgery.

Endogenous Cushing’s disease is caused by a benign tumor in the pituitary gland that prompts the body to produce elevated levels of cortisol, which over time triggers a range of devastating physical and emotional symptoms for patients.

In the SONICS study, the drug significantly cut and normalized mean urinary free cortisol concentrations without a dose increase, according to the company. The LOGICS trial confirmed the drug’s efficacy and safety, Xeris says. Cushing’s is a potentially fatal endocrine disease, and patients often experience years of symptoms before an accurate diagnosis, the company says. After a diagnosis, they’re presented with limited effective treatment options.

Following the approval, the company’s “experienced endocrinology-focused commercial organization can begin rapidly working to help address the needs of Cushing’s syndrome patients in the U.S. who are treated with prescription therapy,” Xeris CEO Paul R. Edick said in a statement.

Aside from its forthcoming Recorlev launch, Xeris markets Gvoke for severe hypoglycemia and Keveyis for primary periodic paralysis.

Back in October, the company partnered up with Merck to help reformulate some of the New Jersey pharma giant’s monoclonal antibody drugs.

A condition that occurs from exposure to high cortisol levels for a long time.
The most common cause is the use of steroid drugs, but it can also occur from overproduction of cortisol by the adrenal glands.
Signs are a fatty hump between the shoulders, a rounded face and pink or purple stretch marks.
Treatment options include reducing steroid use, surgery, radiation and medication.
Cushing’s syndrome can be caused by overuse of cortisol medication, as seen in the treatment of chronic asthma or rheumatoid arthritis (iatrogenic Cushing’s syndrome), excess production of cortisol from a tumor in the adrenal gland or elsewhere in the body (ectopic Cushing’s syndrome) or a tumor of the pituitary gland 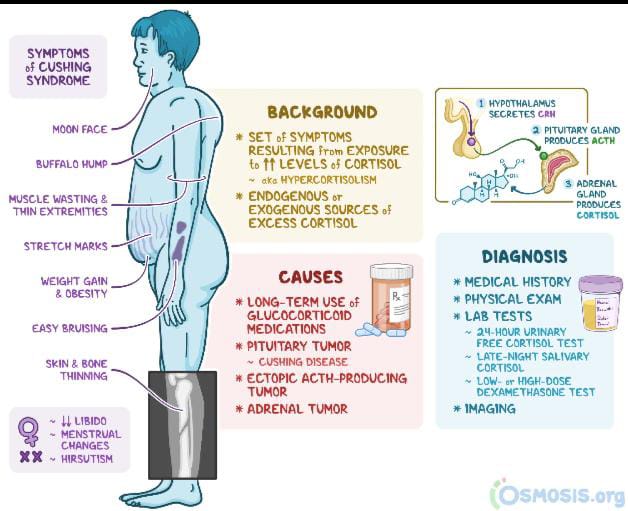