and was originally found in a population of bats from South Africa. To date, NeoCoV is only known to spread among these animals.

Panicky reports of new viruses or mutations of the coronavirus family have been a constant affair over the last couple of years that has seen the world battle an unprecedented pandemic caused by SARS-CoV-2, the novel coronavirus first detected in China that caused Covid-19. Now, there’s talk about ‘NeoCoV’.

There are various reports talking about Chinese scientists warning of a likely variant of the virus that’s linked to the 2012 and 2015 outbreaks in the Middle East. That older virus belongs to the same family as SARS-CoV-2.

Coronaviruses are a large family of viruses that can cause diseases ranging from the common cold to Severe Acute Respiratory Syndrome (SARS). 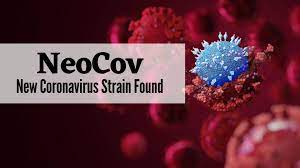 The WHO said that it is aware of the development, but the virus requires further study to ascertain if it poses a risk to humans.

“Whether the virus detected in the study will pose a risk for humans will require further study,” the health body was quoted as saying by Russian news agency TASS.

The organisation said that the source of 75% of infectious diseases in humans was wild animals. “Coronaviruses are often found in animals, including in bats which have been identified as a natural reservoir of many of these viruses,” the global body said.

According to the study, NeoCov can penetrate human cells in the same way as the COVID-19 virus. “NeoCov is only one mutation away from becoming dangerous for humans,” the researchers said in a yet-to-be peer-reviewed study posted on the preprint repository BioRxiv. The study is yet to be peer reviewed.

The virus is closely related to the Middle East respiratory syndrome (MERS), a viral disease that was first identified in Saudi Arabia in 2012.

It said it is working actively to tackle such emerging zoonotic viruses.

WHO also thanked the Chinese researchers for sharing their research in preprint.

But the researchers who recently highlighted the variant have warned that NeoCoV could spread using a similar technique used by Covid-19-causing SARS-CoV-2 with a higher transmission rate. Some reports also say that NeoCoV is not a “new” variant and was discovered much before.

SO WHY ARE WE TALKING ABOUT NEOCOV?

All the current reports are based on a yet-to-be peer-reviewed study published in a preprint (i.e. a research paper on which there have not yet been comments by fellow scientists) on the bioRxiv website. The paper says that NeoCoV, a mutation related to the Middle East Respiratory Syndrome (MERS-CoV), could bind with the ACE2 receptor in a slightly different way than the Covid-19 pathogen and emerge as more dangerous than the current variants. ACE2 is a receptor found in human bodies and the primary route through which SAR-CoV-2 causes infections.

SHOULD YOU WORRY ABOUT NEOCOV?

No, you should not be worried about the reports of this MERS-linked virus going through a zoonotic effect and transmitting from animals to humans. The last outbreak of MERS was reported in 2015 and the World Health Organisation (WHO) said in 2019 that there has been a reduction in cases of MERS globally.

“Since 2016, 1465 cases of MERS-CoV have been reported and between 300 and 500 deaths may have been averted due to accelerated global efforts,” WHO has said. The last outbreak of the virus was reported in 2015 in the Republic of Korea with 186 cases and 38 deaths and had an estimated economic impact of US$12 billion.

IS NEWCOV A NEW COVID VARIANT?

No, NeoCoV is not a Covid variant.

All that we know so far is that NeoCoV is probably linked to the MERS-CoV virus and has only been found among bats so far. The MERS virus is a respiratory virus that can cause severe disease and has been fatal in approximately 35 per cent of patients to date.

According to the WHO, while the MERS virus has demonstrated limited ability to transmit between people outside of hospitals, it has repeatedly caused large scale outbreaks in health care facilities with severe health, security and economic impacts, most notably in Saudi Arabia in 2014-2016 and the Republic of Korea in 2015. In total, 27 countries have reported cases since 2012, leading to 858 known deaths due to the infection and related complications.