Synopsis :
Shares of Madrigal Pharmaceuticals went up in premarket trading after the company announced positive topline data from its Phase III assessment of resmetirom in non-alcoholic fatty liver disease. NAFLD, particularly the advanced form of the disease known as Non-alcoholic steatohepatitis (NASH), has been a difficult space for companies to develop effective therapeutics. After the announcement, the company stock is up more than 18% in early trading.

Pennsylvania-based Madrigal said data from the Phase III MAESTRO-NAFLD-1 safety study of resmetirom showed that the thyroid hormone receptor-beta agonist was safe and well-tolerated at daily dosing levels of 80 mg and 100 mg. Not only is resmetirom showing itself to be safe, but it is also effective. The company said the therapeutic helped patients with presumed NASH achieve significant, clinically relevant reductions in liver fat and atherogenic lipids. Specifically, Madrigal reported that resmetirom significantly reduced atherogenic lipids, including LDLc, apolipoprotein B and triglycerides. Additionally, treatment with resmetirom delivered “significant and clinically relevant reductions in liver f 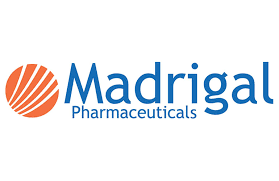 NAFLD is a condition in which excess fat is stored in the liver and is not caused by heavy alcohol use. NAFLD is one of the most common causes of liver disease in the United States and is a precursor to NASH, a severe progressive liver disease caused by excessive fat accumulation in the liver that induces chronic inflammation, resulting in progressive fibrosis that can lead to cirrhosis, eventual liver failure, cancer and death. There are no approved therapies for NASH other than lifestyle adjustments.

The Phase III MAESTRO-NAFLD-1 data is the first of two late-stage trials assessing resmetirom for this indication. Paul Friedman, M.D., chief executive officer of Madrigal, said the positive results from the first Phase III study support the company’s belief that resmetirom has the potential to be the first medication approved for the treatment of patients with NASH and liver fibrosis.

The schedule for the press release and conference call/webcast is as follows:

“Rigorous safety evaluation is critical in NASH drug development because of the large numbers of patients with NASH that could be treated with a new medication once FDA  approved. The large safety database we are generating through the MAESTRO trials supports our regulatory strategy under Subpart H and reflects our commitment to providing the data necessary for overall benefit-risk assessment,” Friedman said in a statement.

Data from the Phase III MAESTRO-NASH study is expected later this year.

The Phase III study included 972 patients who were screened to include three risk factors of metabolic syndrome, including a level of liver fibrosis and more than 8% of liver fat. The primary safety data showed that resmetirom was well-tolerated. The most common adverse event was mild diarrhea that occurred at the beginning of the treatment.

Madrigal’s resmetirom is designed to activate the β-receptor in hepatocytes, which plays a central role in liver function, including the breakdown of liver fat and control of the level of normal, healthy mitochondria NASH patients have reduced levels of thyroid hormone activity in the liver due to the inflamed state of the liver that causes degradation of thyroid hormone.

“This positive readout from MAESTRO-NAFLD-1 is a significant milestone for the field. As the first Phase III study in NASH that does not rely on liver biopsy to identify patients and measure treatment response, MAESTRO-NAFLD-1 will help accelerate the role of non-invasive imaging and biomarkers in NASH drug development,” Stephen Harrison, M.D., medical director for Pinnacle Clinical Research in San Antonio and principal investigator in the MAESTRO studies said in a statement.

Biogen Departure Train Chugs on as Two Board Members Exit