Suppressing the spread of tumors

Why some patients develop metastases and others do not is largely unclear. Researchers around ISTA professor Daria Siekhaus are now contributing to a better understanding of the process in certain types of cancer. They took a close look at the role of a protein called MFSD1 – the mammalian relative of a protein they had previously identified as affecting cell migration in fruit flies. Therefore, first author Marko Roblek from the Siekhaus group created mouse cancer cells lacking the protein. Without the protein, cells traveled much faster, suggesting that MFSD1 prevents the cells from moving. Together with collaborators from the University of Zurich, the team tested their theory in living mice with breast, colon, and skin cancer. “In the absence of MFSD1, there was a strong increase in metastasis,” Daria Siekhaus summarizes the results. 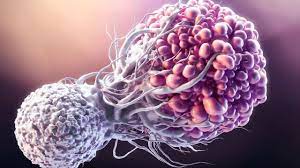 “We wanted to know why lower MFSD1 levels were beneficial to the tumor apart from allowing them to move more freely. As cancer cells travel through the blood for example, they experience a lot of mechanical stress,” Marko Roblek explains. Thus, the researchers performed a stress test on cancer cells with and without the protein. Using a tiny rubber scraper, Roblek tried to scrape the cells off the surface of the Petri dish in which he had grown them. While the cancer cells containing MFSD1 quickly died under the mechanical stress, those without the protein tended to remain intact. Without the protein, the team concluded, certain tumor cells could more easily enter the bloodstream and find their way to other parts of the body. In another experiment, the researcher tested the cancer cell’s resistance to nutrient starvation with a similar result. Again, the cells lacking MFSD1 survived for longer.

The team was able to show that both the cell’s reaction to starvation and mechanical stress are caused by the protein MFSD1. It does so by affecting specific receptors located at the cell surface. These so called integrins ensure the cells stick to each other and the extracellular matrix, a dens network surrounding the cells in our body. In a constant circle, the cell produces these receptors, transports them to the cell surface and back inside the cell. If a tumor cell lacks MFSD1, they fail to recycle a certain type of integrin. “The result is, that the cells stick less to the surrounding tissue and each other, which makes it easier for them to migrate,” says Daria Siekhaus.

The team’s findings are also supported by an analysis of patient data by Rita Seeböck from the University Hospital St. Pölten, Austria. The data, which is available online to researchers in anonymized form, showed a correlation between the level of MFSD1 and the patient’s prognosis. “We’ve seen that patients suffering from specific forms of breast, gastric and lung cancer who had lower levels of MFSD1 had a worse outcome. A high level of MFSD1 seems to be protective – it works like a suppressor of tumor metastasis,” cancer researcher Roblek says.

To optimize therapy for their patients, doctors are already analyzing the expression of certain genes. Now, they can also look for the gene encoding the protein MFSD1. “If this marker becomes more established, doctors can use it to help classify how aggressive the cancer is and to decide between different treatment options”, suggests biologist Daria Siekhaus. In future studies, the team wants to focus in detail on how the protein functions on a molecular level and is curious to learn if artificially raising the amount of MFSD1 could help suppress the spread of certain tumors. The long term goal is to examine if it can be used as a therapeutic target.

With personalized medicine, a shelved cancer drug could get another shot