According to the leading feat-tracking organization, a big strawberry cultivated in Israel that weighed 289 grammes (10.19 ounces) has been confirmed as setting a new Guinness World Record as the heaviest ever. 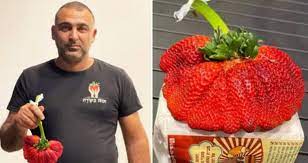 The ripe fruit was discovered on the Ariel family’s Strawberries in the Field plantation in the agricultural town of Kadima-Zoran, in Israel’s central area. According to the statement, it was 18 centimetres (seven inches) long, four centimetres thick, and 34 centimetres in circumference.

The strawberry is of the Ilan variety, which was developed by Israel’s Agricultural Research Organization under the direction of Nir Dai and is notable for producing enormous berries. Dai was present to witness the strawberry’s weighing and explained that the strawberry season was delayed this year due to cold weather, allowing the numerous berries to develop together into one huge fruit.

“The strawberry ripened slowly for over 45 days after blossoming, resulting in its huge size at complete ripening,” he explained.

According to the statement, the Ariel family, which consists of a father and four kids, raised four gigantic strawberries this year, but only one of them exceeded the previous 250-gram record, which was weighed in Fukuoka, Japan, on January 28, 2015.

The Ariel brothers told that they discovered the record-breaker on Friday. It was the biggest they’d seen in nearly four decades of farming the fruit, they added. They looked up the largest strawberry in the Guinness Book of World Records and discovered a new challenger.

They filed a claim with the Guinness website on Saturday night and called in a notary the next day to witness an official weighing before the fruit started to deteriorate and lose its size.