Colombia became the latest country in Latin America to expand access to abortion Monday as the nation’s Constitutional Court voted to legalize the procedure until the 24th week of pregnancy.

The decision by the tribunal of nine judges fell short of the expectations of pro-choice groups that had been pushing for abortion to be completely decriminalized in Colombia. But it was nevertheless described as a historic event by women’s rights groups, which estimate 400,000 women get clandestine abortions in the country each year.

Before the ruling, Colombia allowed abortions only when a woman’s life was in danger, a fetus had malformations or a pregnancy resulted from rape. 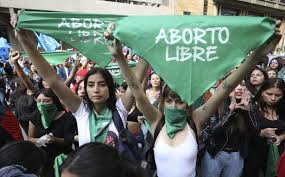 The decision ends a 20-year battle by advocates to legalize abortion and remove it from the criminal code — but it falls short of the complete decriminalization that activists were hoping for.

“We knew this was not an easy fight, but at some point, it had to happen,” Mariana Ardila, a women’s rights activist and lawyer,  “We were trying to get the complete decriminalization of abortion … but this is still a historic step,” said Cristina Rosero, a lawyer for the New York-based Center for Reproductive Rights, an advocacy group that was one of five organizations that filed a lawsuit in 2020 to get the high court to review Colombia’s abortions laws.Of course, while we were hoping for full decriminalization, and we will keep fighting for it, this is an important step forward for us.”

Various groups celebrated the decision on Monday in front of the court building in Bogota. Argentina Passsed lAw in 2020 that legalized abortion after lawmakers reversed a vote two years earlier that blocked a wider-ranging abortion bill.

Takeda Teams Up with Code in $2B Rare Disease Pact