World Wildlife Day is celebrated on March 3 each year since 2014 to raise awareness about endangered flora and fauna. Delicate ecological zones across the planet are getting damaged because of human encroachment for land use, hunting and poaching, and the dumping of toxins. Below, we look at five critically endangered animals, threatened due to human activities. 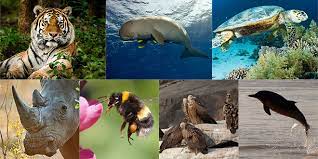 The smallest elephant species, the African forest elephant is listed as critically endangered in the Red List of The International Union for Conservation of Nature (IUCN). They are endangered due to habitat loss from the conversion of forest land into farming pastures. The animals are also at risk because of poaching and bushmeat hunting.

The Sunda islands in Indonesia were home to three subspecies of tigers, jointly referred to as the Sunda tigers. They lived in the islands of Java, Bali and Sumatra. Today, the Javan and Bali tigers are extinct and only about 400 Sumatran tigers remain. Rapid deforestation and poaching for tiger parts and traditional Chinese medicine has pushed them towards extinction.

The smallest of all aquatic mammals, the vaquita is a porpoise or small whale, like the Dolphin. Only ten or fewer individuals remain in the seas today. Vaquitas get caught in fishing nets as bycatch or suffer the effects of toxic pollutants dumped into their waters. Captive breeding programs aimed to increase their numbers have not been successful.

Three speciesof orangutans, namely, the Bornean orangutan, the Sumatran orangutan and the Tapanuli orangutan, discovered in 2017, survive today. They spend most of their lives on the trees. They are poached as bushmeat, killed by farmers, and are losing their habitat because of deforestation for palm oil cultivation.

Hawksbill turtles get their name from their distinctively pointy, hawk-like beaks. They have a flat, disc-shaped appearance, overlapping scales on their shells that form serrations at the edges. Hawksbills are killed for meat, their shells are used for decoration, and they get stolen by illegal pet traders. Their population has declined by 80 per cent in the past 100 years.