Janssen Pharmaceutical, a division of Johnson & Johnson, won an arbitrary victory against royalty choices arising from the licencing and marketing of daratumumab, an anti-CD38 monoclonal antibody therapy with numerous FDA-approved applications (FDA). A three-person tribunal conducted the confidential arbitration earlier this week.

In this arbitration, two topics were discussed.

Daratumumab, sold under the brand name Darzalex, is an anti-cancer monoclonal antibody medication. It binds to CD38, which is overexpressed in multiple myeloma cells

Daratumumab was originally created by Genmab, but it is now being developed jointly by Genmab and Janssen Biotech, a Johnson & Johnson company that bought the drug’s worldwide marketing rights from Genmab. Daratumumab was designated as a breakthrough therapy medication for multiple myeloma in 2013. 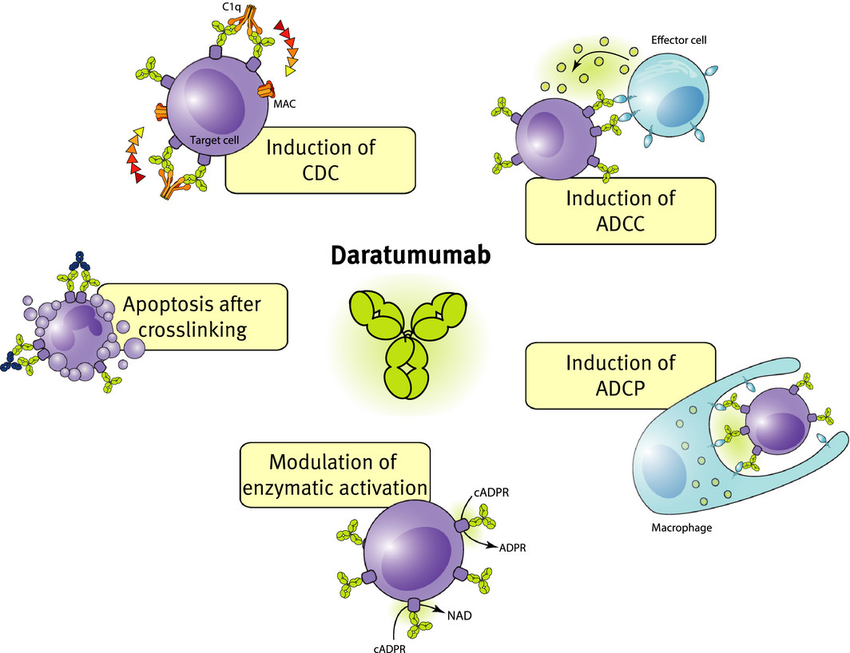 Daratumumab is an antibody directed against a protein called CD38, which is found on the surface of multiple myeloma cells. Once daratumumab attaches itself to the cells expressing CD38, it summons the body’s immune system to attack and destroy those cells.

The antibody treatment was the first to be approved for the treatment of multiple myeloma and the sole approved treatment for light-chain amyloidosis. The medication works by attaching antibodies to CD38 molecules, which triggers an immune response and apoptosis in tumour cells.

The medicine has been granted the brand name Darzalex by Janssen, with the purpose of using it in conjunction with other drugs and personalising treatment to the indication. Darzalex Faspro is a medication that is sold in combination with hyaluronidase-fihj.

To accurately discuss the outcomes of participants, the study protocol included follow-ups, the topic of Janssen’s update. These follow-ups, which were conducted at 38.6 months on average, contributed to the overall positive results.  Progression-free survival in both arms was one of the key indicators of the drug’s success, along with a lack of safety concerns. The minimal residual disease negativity rate continued to stay high in comparison to patients that were dosed with lenalidomide and dexamethasone alone, who served as the control group.

Genmab A/S is a Danish biotechnology company, founded in February 1999 by Florian Schönharting, at the time managing director of BankInvest Biomedical venture fund.

Genmab is an international biotechnology company with a core purpose to improve the lives of people with cancer. For more than 20 years, Genmab’s vision to transform cancer treatment has driven its passionate, innovative and collaborative teams to invent next-generation antibody technology platforms and leverage translational research and data sciences, fueling multiple differentiated cancer treatments that make an impact on people’s lives. To develop and deliver novel therapies to patients, Genmab has formed 20+ strategic partnerships with biotechnology and pharmaceutical companies.

Janssen Pharmaceuticals is a pharmaceutical company headquartered in Beerse, Belgium, and wholly-owned by Johnson & Johnson. It was founded in 1953 by Paul Janssen.

The International PCT Patent Application for Inhalation Delivery of Multiple Psychedelic Molecules has been published by Cybin.