While the jury also found that the infringement of patent No. 10,808,039 was willful, there was no punitive damage awarded. The jury needed just two hours to come to its decision after the sides presented their cases over four days.

In addition, Seagen has requested royalties from sales of Enhertu in the United States until expiration of the patent in November 2024. That case will be arbitrated later this year.

According to the lawsuit, Daiichi used Seagen’s patent in its Enhertu medication, earning more than $522 million in sales through the date of trial.

“Daiichi Sankyo disagrees with the jury verdict” and will “explore options” for the case moving forward, Naoto Tsukaguchi, Daiichi’s general counsel, said in a statement.

Separately, a board at the United States Patent and Trademark Office has agreed to start a review of Seagen’s ‘039 patent. Tsukaguchi said Daiichi is “pleased” with that development.

Trastuzumab deruxtecan, sold under the brand name Enhertu, is an antibody-drug conjugate consisting of the humanized monoclonal antibody trastuzumab (Herceptin) covalently linked to the topoisomerase I inhibitor deruxtecan (a derivative of exatecan).

Indication – for the treatment of breast cancer or gastric or gastroesophageal

ENHERTU binds to HER2-receptors expressed on tumor cells to form an ENHERTU-HER2 complex, which is internalized. After internalization, the linker is selectively cleaved by lysosomal enzymes that are upregulated in tumor cells, releasing the payload inside the cancer cells. 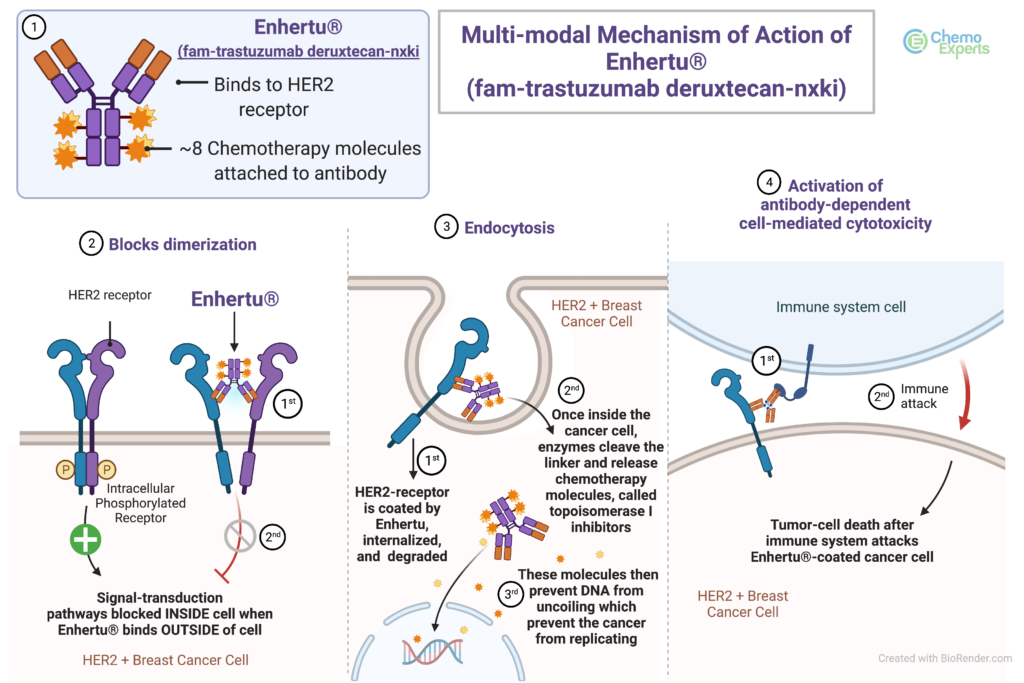 While Enhertu is Daiichi Sankyo’s most important antibody-drug conjugate anti-cancer drug, the financial hit is mild for the company, according to analysts at Jefferies, who point out that the $41.8 million royalty payment represents 7.5% of Enhertu’s total sales of $558 million in the U.S. in 2020 and 2021.

In addition, if it is determined that royalties are to be paid at a rate of 7.5% going forward, Jefferies says Daiichi can comfortably absorb that hit as well. Enhertu’s sales are expected to reach $5.7 billion by 2030. Daiichi shares marketing rights on the drug with AstraZeneca.

“We believe that the impact of the jury’s decision and Seagen’s request will be minimal on Daiichi’s profit,” Naoya Miura of Jefferies wrote in a note to investors.

In a separate matter involving the companies, Seagen is challenging Daiichi’s ownership of certain technologies used by the company in developing trastuzumab deruxtecan and other drug candidates, Seagen said in its release.

In the ongoing arbitration, Seagen says that the linker and other ADC technology used in the compounds are improvements on Seagen’s pioneering efforts in the area. A decision in the arbitration case is expected by mid-2022.

Daiichi Sankyo, Inc. (DSI) began operating in the U.S. in 2006. It is the U.S. subsidiary of Daiichi Sankyo Company, Limited, and a member of the Daiichi Sankyo Group. The organization, which includes U.S. commercial operations and global clinical development (Daiichi Sankyo Pharma Development), is headquartered in Basking Ridge, NJ

Seagen Inc. is an American biotechnology company focused on developing and commercializing innovative, empowered monoclonal antibody-based therapies for the treatment of cancer.