That drug, bemarituzumab, has been through a phase 2 trial as a front-line treatment in patients with advanced gastric and gastroesophageal junction cancers, with make-or-break data out last November.

The readout broke down like this: Investigators enrolled 155 people with FGFR2b-positive tumors, a subpopulation that accounts for 30% of all non-HER2-positive patients, and randomized them to receive bemarituzumab or placebo on top of chemotherapy.

Bemarituzumab (anti-FGFR2b) is a potential first-in-class investigational targeted antibody that is designed to block fibroblast growth factors (FGFs) from binding and activating FGFR2b, inhibiting several downstream pro-tumor signaling pathways and potentially slowing cancer progression. Bemarituzumab is being developed in gastric and GEJ cancer as a targeted therapy for tumors that overexpress FGFR2b. The company is also evaluating the potential for bemarituzumab in other cancers that overexpress FGFR2b. 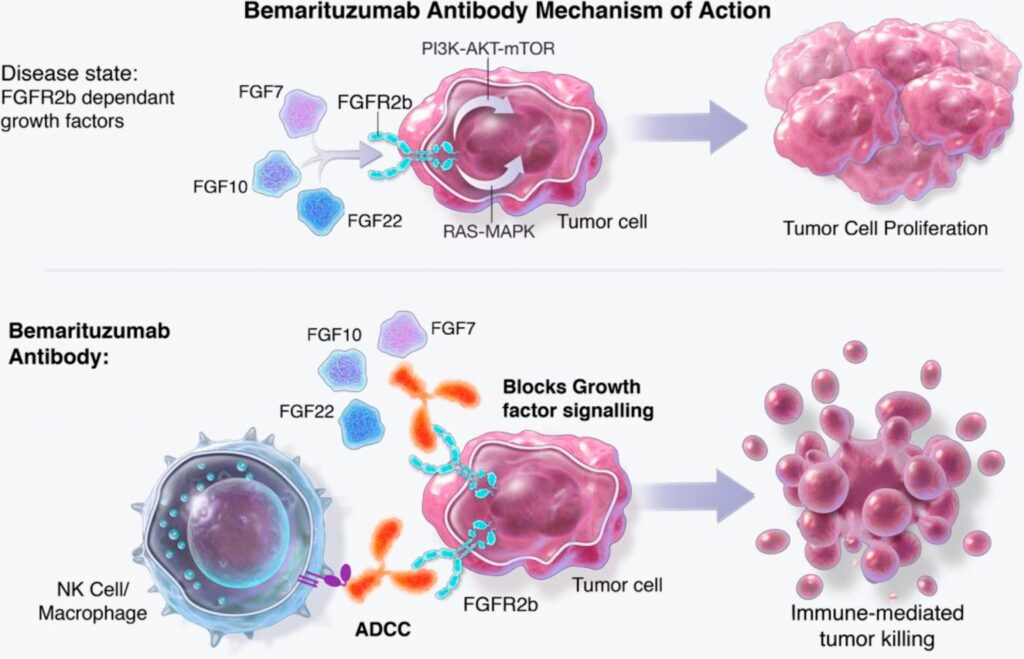 FGFR2b is a specific isoform of the receptor tyrosine kinase FGFR2 that is overexpressed in various types of cancer and is responsible for tumor proliferation, differentiation, and survival.

The trial cleared the pre-specified bar for statistical significance against all three efficacy endpoints, although the p-values were higher than the 0.05 that typically serves as the cutoff for effectiveness.

Progression-free survival in patients who received bemarituzumab on top of chemotherapy was 9.5 months, more than two months longer than the figure in the control arm. The difference worked out at a p-value of 0.073 and a hazard ratio of 0.68. Ahead of the data readout, Five Prime Chief Medical Officer Helen Collins, M.D., told investors previously successful gastric cancer trials achieved hazard ratios of around 0.7.

Besides bemarituzumab, Five Prime has been developing other immuno-oncology experimental drugs. Yes, the incredible clinical success generated by the advent of PD-(L)1 and CTLA-4 blockers has made effective cancer treatment possible. Alas, many patients do not respond to these immune checkpoint inhibitors, and therefore there is a high unmet medical need for new drugs targeting other immunosuppressive mechanisms by which tumors evade immunological responses.

About Amgen
Amgen is committed to unlocking the potential of biology for patients suffering from serious illnesses by discovering, developing, manufacturing and delivering innovative human therapeutics. This approach begins by using tools like advanced human genetics to unravel the complexities of disease and understand the fundamentals of human biology.

Amgen focuses on areas of high unmet medical need and leverages its expertise to strive for solutions that improve health outcomes and dramatically improve people’s lives. A biotechnology pioneer since 1980, Amgen has grown to be one of the world’s leading independent biotechnology companies, has reached millions of patients around the world and is developing a pipeline of medicines with breakaway potential.

Halozyme has agreed to Acquire Antares Pharma for $960 million.

Alymsys® (Bevacizumab-maly), a Biosimilar of Bevacizumab developed by mAbxience, has been Approved by the FDA.

Halozyme has agreed to Acquire Antares Pharma for...