Summary : Amvuttra (vutrisiran) from Alnylam Pharmaceuticals has been licenced by the US Food and Drug Administration for the treatment of hereditary transthyretin-mediated amyloidosis (hATTR) with polyneuropathy in adults.

This early decision came as a surprise for many, as the FDA had originally extended the review period from April to July 14.

The disease is rare, inherited, quickly progressive and fatal, with few treatment options. Polyneuropathy is a malfunction of many peripheral nerves throughout the body, and hATTR is caused by mutations in the TTR gene. The TTR protein is mostly produced in the liver and normally carries vitamin A.

The approval was based on positive nine-month data from the Phase III HELIOS-A trial. In it, Amvuttra improved the signs and symptoms of polyneuropathy. More than 50% of patients receiving the drug had their symptoms stopped or reversed.

“Twenty years ago, Alnylam was founded with the bold vision for RNA interference to make a meaningful impact on the lives of people around the world in need of new approaches to address serious diseases with significant unmet medical needs, such as hATTR amyloidosis,” Yvonne Greenstreet, CEO of Alnylam, said in a statement. “Today, Amvuttra has the potential to change the standard of care for people living with the polyneuropathy of this devastating disease.”

The drug is an RNA interference (RNAi) therapeutic. It is made up of a double-stranded small interfering RNA (siRNA) that targets mutant and wild-type transthyretin (TTR) messenger RNA (mRNA). Essentially, it suppresses the expression of a specific gene or gene segment, preventing the production of an abnormal protein. Vutrisiran for polyneuropathy is dosed via subcutaneous injection once every three months.

Description – Vutrisiran is an investigational, subcutaneously administered RNAi therapeutic in development for the treatment of ATTR amyloidosis, which encompasses both hereditary ATTR (hATTR) amyloidosis and wild-type ATTR (wtATTR) amyloidosis. It is designed to target and silence specific messenger RNA, potentially blocking the production of wild-type and variant transthyretin (TTR) protein before it is made. Quarterly, and potentially biannual, administration of vutrisiran may help to reduce deposition and facilitate the clearance of TTR amyloid deposits in tissues and potentially restore function to these tissues.

Mechanism of Action – Vutrisiran utilizes Alnylam’s Enhanced Stabilization Chemistry (ESC)-GalNAc-conjugate delivery platform, designed for increased potency and high metabolic stability that may allow for infrequent subcutaneous injections. The safety and efficacy of vutrisiran have not been evaluated by the U.S. Food and Drug Administration, European Medicines Agency, or any other health authority. 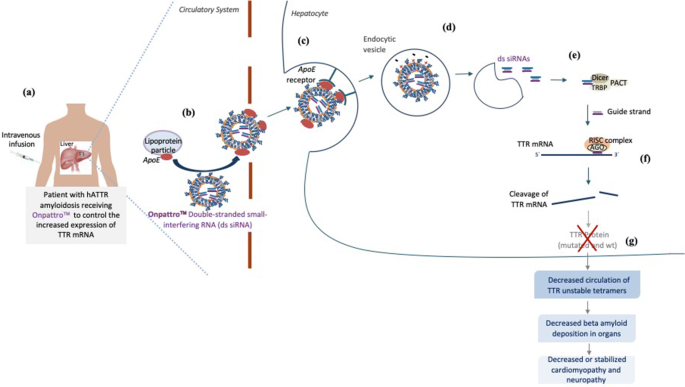 Hereditary transthyretin-mediated (hATTR) amyloidosis is an inherited, progressively debilitating, and fatal disease caused by variants (i.e., mutations) in the TTR gene. TTR protein is primarily produced in the liver and is normally a carrier of vitamin A. Variants in the TTR gene cause abnormal amyloid proteins to accumulate and damage body organs and tissue, such as the peripheral nerves and heart, resulting in intractable peripheral sensory-motor neuropathy, autonomic neuropathy, and/or cardiomyopathy, as well as other disease manifestations. hATTR amyloidosis, represents a major unmet medical need with significant morbidity and mortality affecting approximately 50,000 people worldwide. The median survival is 4.7 years following diagnosis, with a reduced survival (3.4 years) for patients presenting with cardiomyopathy.

About RNAi
RNAi (RNA interference) is a natural cellular process of gene silencing that represents one of the most promising and rapidly advancing frontiers in biology and drug development today. Its discovery has been heralded as “a major scientific breakthrough that happens once every decade or so,” and was recognized with the award of the 2006 Nobel Prize for Physiology or Medicine. By harnessing the natural biological process of RNAi occurring in our cells, a new class of medicines, known as RNAi therapeutics, is now a reality. Small interfering RNA (siRNA), the molecules that mediate RNAi and comprise Alnylam’s RNAi therapeutic platform, function upstream of today’s medicines by silencing messenger RNA (mRNA) – the genetic precursors – that encode for disease-causing proteins, thus preventing them from being made. This is a revolutionary approach with the potential to transform the care of patients with genetic and other diseases.

About Alnylam Pharmaceuticals
Alnylam (Nasdaq: ALNY) has led the translation of RNA interference (RNAi) into a whole new class of innovative medicines with the potential to transform the lives of people afflicted with rare and prevalent diseases with unmet need. Based on Nobel Prize-winning science, RNAi therapeutics represent a powerful, clinically validated approach yielding transformative medicines. Since its founding 20 years ago, Alnylam has led the RNAi Revolution and continues to deliver on a bold vision to turn scientific possibility into reality. Alnylam’s commercial RNAi therapeutic products are ONPATTRO® (patisiran), GIVLAARI® (givosiran), OXLUMO® (lumasiran), and Leqvio® (inclisiran) being developed and commercialized by Alnylam’s partner, Novartis. Alnylam has a deep pipeline of investigational medicines, including six product candidates that are in late-stage development. Alnylam is executing on its “Alnylam P5x25” strategy to deliver transformative medicines in both rare and common diseases benefiting patients around the world through sustainable innovation and exceptional financial performance, resulting in a leading biotech profile. Alnylam is headquartered in Cambridge, MA.