The U.S. Food and Drug Administration (FDA) has approved XenpozymeTM (olipudase alfa-rpcp) for the treatment of non-central nervous system (non-CNS) manifestations of acid sphingomyelinase deficiency (ASMD) in adult and pediatric patients. Xenpozyme is the first therapy indicated specifically for the treatment of ASMD, and is currently the only approved treatment for this disease. 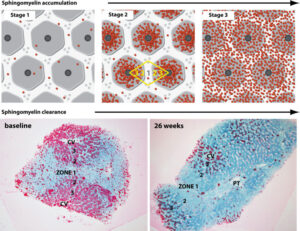 Clearance of Hepatic Sphingomyelin by Olipudase Alfa Is Associated With Improvement in Lipid Profiles in Acid Sphingomyelinase Deficiency.

Bill Sibold
Executive Vice President, Head, Specialty Care at Sanofi
“Sanofi teams have been dedicated to bringing hope to patients living with ASMD and their families. This is a devastating and extremely rare disease that affects both children and adults. The approval of Xenpozyme represents the culmination of bold work done in research and development, and our unwavering commitment to this historically overlooked community.”

ASMD, historically known as Niemann-Pick disease types A, A/B, and B, is an extremely rare, progressive genetic disease with significant morbidity and mortality. It has been estimated that there are fewer than 120 patients diagnosed with ASMD in the U.S. Approximately two-thirds of patients with ASMD in the U.S. are pediatric. Signs and symptoms of ASMD can present in infancy, childhood, or adulthood, and may include enlarged spleen or liver, difficulty breathing, lung infections, and unusual bruising or bleeding, among other disease manifestations. Until now, management of ASMD included supportive care to address the impact of individual symptoms and careful monitoring to detect potential disease complications.

David Guy
Parent to Kaila, age 16, living with ASMD
“As young parents, it was initially devastating to me and my wife when our daughter, Kaila, received her diagnosis of ASMD. We faced so many unknowns when we first heard the diagnosis: what does this mean, how will this affect her, and most importantly what hope is there for a treatment option? We were grateful to find hope when we enrolled Kaila in the clinical trials for olipudase alfa.”

In the U.S., Xenpozyme received Breakthrough Therapy designation, which expedites the development and review of drugs intended to treat serious or life-threatening diseases and conditions. The FDA evaluated Xenpozyme under Priority Review, which is reserved for medicines that represent potentially significant improvements in efficacy or safety in treating serious conditions.. In March 2022, Xenpozyme was approved in Japan under the SAKIGAKE (or “pioneer”) designation, marking the first approval for olipudase alfa anywhere in the world. In June 2022, the European Commission (EC) approved Xenpozyme for use in Europe.

ASMD represents a spectrum of disease, with two types that may represent opposite ends of a continuum referred to as ASMD type A and ASMD type B. ASMD type A/B is an intermediate form that includes varying degrees of central nervous system (CNS) involvement.

The approval is based on positive data from the ASCEND and ASCEND-Peds clinical trials, in which Xenpozyme showed clinically relevant improvement in lung function (as measured by diffusing capacity of the lung for carbon monoxide, or DLco) and platelet count, and reduction of spleen and liver volumes, with a demonstrated safety profile.

Melissa Wasserstein
MD, Pediatric Genetic Medicine, Albert Einstein College of Medicine and the Children’s Hospital at Montefiore
“ASMD is an extremely rare, progressive, and potentially fatal genetic disease that impacts children and adults around the world. Until now, those living with ASMD have had no FDA-approved treatment to combat this devastating condition. I’m proud of the work that has been done and look forward to witnessing the impact that this treatment may have on those living with ASMD.”

The ASCEND trial evaluated the efficacy and safety of Xenpozyme; 31 adult patients with ASMD type A/B or type B were randomized to receive Xenpozyme or placebo for 52 weeks (primary analysis). In the trial, Xenpozyme improved lung function, assessed as the percent change from baseline to Week 52 in predicted diffusing capacity of the lung for carbon monoxide (DLco), and reduced spleen volume, evaluated as percent change from baseline in multiples of normal (MN).

The single-arm ASCEND-Peds trial studied 8 pediatric patients younger than 12 years of age with ASMD type A/B or type B who all received Xenpozyme, with a primary objective of evaluating the safety and tolerability of Xenpozyme for 64 weeks. All patients completed the study and continued in an extension trial. The ASCEND-Peds trial also explored efficacy endpoints of progressive lung disease, spleen and liver enlargement, and platelet count. After one year of treatment (52 weeks): 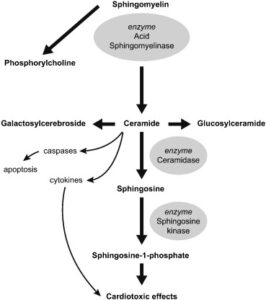 ASMD most commonly affects the spleen, liver, lungs, blood, and digestive system. Symptoms may appear as:

A scientific innovation for patients living with ASMD

Xenpozyme, a hydrolytic lysosomal sphingomyelin-specific enzyme replacement therapy, is designed to replace deficient or defective acid sphingomyelinase (ASM), an enzyme that allows for the breakdown of the lipid sphingomyelin. In individuals with ASMD, the deficiency in the ASM enzyme leads to sphingomyelin accumulation in various tissues. Xenpozyme is not expected to cross the blood-brain barrier or modulate CNS manifestations of ASMD. Xenpozyme has not been studied in patients with ASMD type A.

Xenpozyme is adminstered intravenously every two weeks, and its administration requires a dose escalation phase followed by a maintenance phase.

Xenpozyme is expected to be available in the U.S. in the coming weeks. The U.S. list price, or wholesale acquisition cost, of Xenpozyme is $7,142.00 per vial. Actual patient out-of-pocket costs may be lower, as the list price does not reflect insurance coverage, co-pay support for eligible patients, or financial assistance from patient support programs.

About Sanofi
We are an innovative global healthcare company, driven by one purpose: we chase the miracles of science to improve people’s lives. Our team, across some 100 countries, is dedicated to transforming the practice of medicine by working to turn the impossible into the possible. We provide potentially life-changing treatment options and life-saving vaccine protection to millions of people globally, while putting sustainability and social responsibility at the center of our ambitions.