Nobel Prize 2022: Svante Pääbo was given the award “for his discoveries concerning the genomes of extinct hominins and human evolution,” the Nobel Prize committee said.

Considered the most prestigious prize in the scientific world, it is awarded by the Nobel Assembly of Sweden’s Karolinska Institute and is worth 10 million Swedish crowns ($900,357). 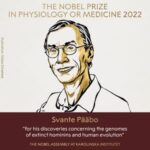 Announcing the award, the Nobel Prize committee said, “Through his pioneering research, Svante Pääbo accomplished something seemingly impossible: sequencing the genome of the Neanderthal, an extinct relative of present-day humans. He also made the sensational discovery of a previously unknown hominin, Denisova.”

“Svante Pääbo’s research gave rise to an entirely new scientific discipline; paleogenomics. By revealing genetic differences that distinguish all living humans from extinct hominins, his discoveries provide the basis for exploring what makes us uniquely human,” the statement added.

The award also comes at a time when the Covid pandemic placed the medical research at centre stage. The announcement will be followed by Nobel Prizes for physics on Tuesday, chemistry on Wednesday and literature on Thursday.

Pääbo had to develop ways of analysing DNA that had been damaged by thousands of years of exposure to the elements, and contaminated with sequences from microorganisms and modern humans. He and his collaborators then put these techniques to work sequencing the Neanderthal genome, which was published in 2010. This genetic analysis led to the finding that Neanderthals and Homo sapiens interbred, and that 1–4% of the genome of modern humans of European or Asian descent can be traced back to the Neanderthals.

Pääbo’s techniques were also used to identify the origins of a 40,000-year-old finger bone found in a southern Siberian cave in 2008. DNA isolated from the bone indicated that it was from neither Neanderthals nor Homo sapiens, but came from an individual belonging to a new group of hominins . The group was named the Denisovans, after the cave in which the bone was found. Ancient humans living in Asia interbred with this group, too, and Denisovan DNA can be found in the genomes of billions of people alive today.

During the early years of ancient DNA research — led by Pääbo and other scientists in the 1980s and 1990s — the field was plagued by concerns over contamination from modern human DNA (Pääbo has admitted that DNA he recovered early on from Egyptian mummy remains was probably his own). But, thanks to methods developed in Pääbo’s laboratory, as well as the advent of new sequencing technologies, contamination is no longer the ‘bogeyman’ it once was.

“When I started, we weren’t even sure you could work with ancient human DNA,” says Pontus Skoglund, a palaeogeneticst at the Francis Crick Institute in London. “But now, and I think led by Svante’s department, we have an approach where contamination is really not a major issue anymore.”

Pääbo’s work teasing out DNA from Neanderthals, Denisovans and other hominins also has important implications for modern medicine. Although the proportion of the human genome comprised of archaic DNA is small, this material seems to punch above its weight, making an important contribution to the risks of diseases ranging from schizophrenia  to severe COVID-19. And people living on the Tibetan Plateau can thank Denisovans for gene variants linked to high-altitude adaptation.

“The fact that a good fraction of the people running around in the world today have DNA from archaic humans like Neanderthals is of important consequence to who we are,” says Reich. “So I think that knowing that and trying to understand the implications of that for health is something that will be with us for the rest of our time as a species.” With genomes from multiple Neanderthals and Denisovans available, it is now possible to identify uniquely human genes, says Johannes Krause, a palaeogeneticist at MPI-EVA.

Researchers describe Pääbo as intense and driven, but also collegial and generous. His department at the Max Planck Institute for Evolutionary Anthropology has produced a generation of palaeogeneticists who are pushing the field ever further.

Svante Pääbo (Swedish  born 20 April 1955) is a Swedish geneticist specialising in the field of evolutionary genetics. As one of the founders of paleogenetics, he has worked extensively on the Neanderthal genome. He is the founding director of the Department of Genetics at the Max Planck Institute for Evolutionary Anthropology in Leipzig, Germany, since 1997. He is also professor at Okinawa Institute of Science and Technology, Japan.

In 2022, he was awarded the Nobel Prize in Physiology or Medicine “for his discoveries concerning the genomes of extinct hominins and human evolution”.

About The Nobel Prizes

The Nobel Prizes are five separate prizes that, according to Alfred Nobel’s will of 1895, are awarded to “those who, during the preceding year, have conferred the greatest benefit to humankind.” Alfred Nobel was a Swedish chemist, engineer, and industrialist most famously known for the invention of dynamite. Nobel Prizes are widely regarded as the most prestigious awards available in their respective fields. The prize ceremonies take place annually. Each recipient (known as a “laureate”) receives a gold medal, a diploma, and a monetary award. In 2021, the Nobel Prize monetary award is 10,000,000 SEK.

Alfred Nobel was an inventor, entrepreneur, scientist and businessman who also wrote poetry and drama. His varied interests are reflected in the prize he established and which he lay the foundation for in 1895 when he wrote his last will, leaving much of his wealth to the establishment of the prize.