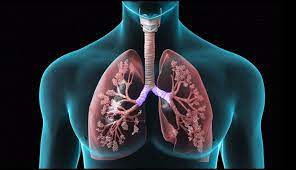 The phase 3 trial involved over 800 candidates to assess ensifentrine when administered as a maintenance therapy to patients diagnosed with COPD.

Verona Pharma has announced completion of patient enrolment–with over 800 subjects randomised in the ENHANCE-2 trial–evaluating ensifentrine for the maintenance treatment of chronic obstructive pulmonary disease (COPD).

The phase 3 ENHANCE programme consists of two double-blind, placebo-controlled studies, evaluating nebulised ensifentrine for the maintenance treatment of COPD. The 48-week subset of the ENHANCE-1 trial completed enrolment of approximately 400 subjects in December 2021, while enrolment in the 24-week subset of ENHANCE-1 is expected to complete in the second quarter of 2022.

The primary endpoint of the study is improvement in lung function, as measured by forced expiratory volume in one second, over 12 hours with ensifentrine after 12 weeks of treatment.

COPD is a chronic inflammatory lung disease that causes obstructed airflow from the lungs. Symptoms include breathing difficulty, cough, mucus production and wheezing. The disease is primarily caused by long-term exposure to irritating gases, such as cigarette smoke.

Ensifentrine is a first-in-class product candidate that combines bronchodilator and anti-inflammatory properties in one compound. In previous studies into COPD, ensifentrine has demonstrated clinically meaningful improvements in lung function, symptoms, and quality of life as a monotherapy, or added onto a maintenance bronchodilator.

“Completing enrollment in the phase 3 ENHANCE-2 trial with more than 800 subjects is an important accomplishment for Verona Pharma,” said David Zaccardelli, Pharm D, president and CEO. “We are pleased to achieve our recruitment targets during the ongoing global pandemic.”

He added: “We expect to report top-line data from ENHANCE-2 in the third quarter of 2022 and from ENHANCE-1 around the end of 2022. We look forward to reporting these results and working with the regulatory authorities to address the urgent need for a novel treatment for COPD.” 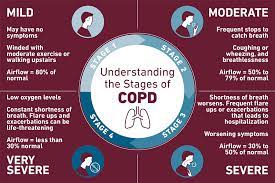 t’s typically caused by long-term exposure to irritating gases or particulate matter, most often from cigarette smoke. People with COPD are at increased risk of developing heart disease, lung cancer and a variety of other conditions.

Emphysema and chronic bronchitis are the two most common conditions that contribute to COPD. These two conditions usually occur together and can vary in severity among individuals with COPD.

Chronic bronchitis is inflammation of the lining of the bronchial tubes, which carry air to and from the air sacs (alveoli) of the lungs. It’s characterized by daily cough and mucus (sputum) production.

Emphysema is a condition in which the alveoli at the end of the smallest air passages (bronchioles) of the lungs are destroyed as a result of damaging exposure to cigarette smoke and other irritating gases and particulate matter.

Although COPD is a progressive disease that gets worse over time, COPD is treatable. With proper management, most people with COPD can achieve good symptom control and quality of life, as well as reduced risk of other associated conditions 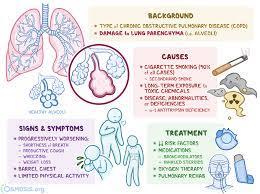 Signs and symptoms of COPD may include:

People with COPD are also likely to experience episodes called exacerbations, during which their symptoms become worse than the usual day-to-day variation and persist for at least several days.

When to see a doctor

Talk to your doctor if your symptoms are not improving with treatment or getting worse, or if you notice symptoms of an infection, such as fever or a change in sputum.

Seek immediate medical care if you can’t catch your breath, if you experience severe blueness of your lips or fingernail beds (cyanosis) or a rapid heartbeat, or if you feel foggy and have trouble concentrating.

The main cause of COPD in developed countries is tobacco smoking. In the developing world, COPD often occurs in people exposed to fumes from burning fuel for cooking and heating in poorly ventilated homes.

Only some chronic smokers develop clinically apparent COPD, although many smokers with long smoking histories may develop reduced lung function. Some smokers develop less common lung conditions. They may be misdiagnosed as having COPD until a more thorough evaluation is performed.

How your lungs are affected

Air travels down your windpipe (trachea) and into your lungs through two large tubes (bronchi). Inside your lungs, these tubes divide many times — like the branches of a tree — into many smaller tubes (bronchioles) that end in clusters of tiny air sacs (alveoli).

The air sacs have very thin walls full of tiny blood vessels (capillaries). The oxygen in the air you inhale passes into these blood vessels and enters your bloodstream. At the same time, carbon dioxide — a gas that is a waste product of metabolism — is exhaled.

Your lungs rely on the natural elasticity of the bronchial tubes and air sacs to force air out of your body. COPD causes them to lose their elasticity and over-expand, which leaves some air trapped in your lungs when you exhale.

Causes of airway obstruction include:

Cigarette smoke and other irritants

In the vast majority of people with COPD, the lung damage that leads to COPD is caused by long-term cigarette smoking. But there are likely other factors at play in the development of COPD, such as a genetic susceptibility to the disease, because not all smokers develop COPD.

Other irritants can cause COPD, including cigar smoke, secondhand smoke, pipe smoke, air pollution, and workplace exposure to dust, smoke or fumes.

In about 1% of people with COPD, the disease results from a genetic disorder that causes low levels of a protein called alpha-1-antitrypsin (AAt). AAt is made in the liver and secreted into the bloodstream to help protect the lungs. Alpha-1-antitrypsin deficiency can cause liver disease, lung disease or both.

For adults with COPD related to AAt deficiency, treatment options include those used for people with more-common types of COPD. In addition, some people can be treated by replacing the missing AAt protein, which may prevent further damage to the lungs.

Risk factors for COPD include:

COPD can cause many complications, including:

Unlike some diseases, COPD typically has a clear cause and a clear path of prevention, and there are ways to slow the progression of the disease. The majority of cases are directly related to cigarette smoking, and the best way to prevent COPD is to never smoke — or to stop smoking now.

If you’re a longtime smoker, these simple statements may not seem so simple, especially if you’ve tried quitting — once, twice or many times before. But keep trying to quit. It’s critical to find a tobacco cessation program that can help you quit for good. It’s your best chance for reducing damage to your lungs.

Occupational exposure to chemical fumes and dusts is another risk factor for COPD. If you work with these types of lung irritants, talk to your supervisor about the best ways to protect yourself, such as using respiratory protective equipment.

Here are some steps you can take to help prevent complications associated with COPD: