Shionogi & Co., Ltd. (Head Office: Osaka, Japan; President and CEO: Isao Teshirogi, Ph.D.; hereafter “Shionogi”) today announced that Shionogi has completed the analysis of primary endpointsa), b) in the Phase 2b part of a Phase 2/3 clinical trial of S-217622, an orally administered antiviral drug for COVID-19, and has filed for manufacture and sales approval, requesting review under the conditional approval system in Japan.

Oral antiviral medications, in addition to vaccines, are expected to play an important role in treating coronavirus disease 2019 (COVID-19), which is caused by infection with the severe acute respiratory disease coronavirus-2 (SARS-CoV-2). 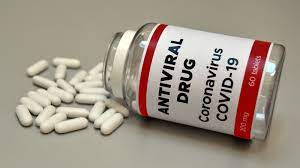 These drugs must have significant antiviral activity, as well as target specificity, oral bioavailability, and metabolic stability. Although several antiviral compounds have been reported as possible SARS-CoV-2 inhibitors in vitro, only a few of these drugs have been shown to be effective in vivo.

S-217622 also demonstrated antiviral effectiveness against SARS-CoV-2 variants of concern (VOCs), such as the highly pathogenic Delta variant and the newly discovered Omicron variant. Overall, these findings show that S-217622, which is an antiviral drug that is currently being tested in Phase II/III clinical trials, has impressive antiviral efficiency and effectiveness against SARS-CoV-2 and could be a viable oral treatment option for COVID-19.

Ensitrelvir (code name S-217622, brand name Xocova) is an antiviral drug developed by Shionogi in partnership with Hokkaido University, which acts as an orally active 3C-like protease inhibitor for the treatment of COVID-19 infection.  It is taken by mouth, and has been successfully tested against the recently emerged Omicron variant 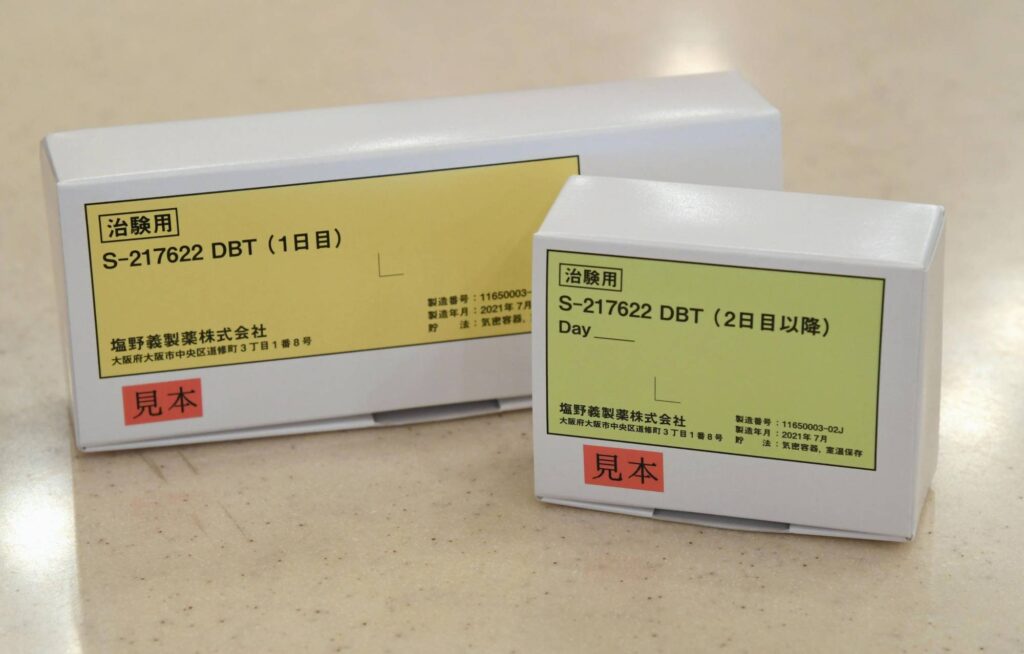 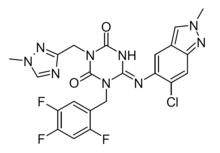 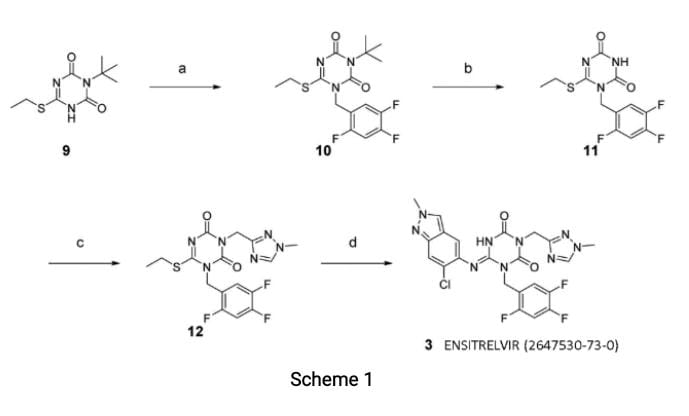 the 3-tert-Bu group was removed and the triazole unit was introduced, and the substitutionof the SEt moiety with the indazole unit finally gave Ensitrelvir (S-217622). Approval – It became the first Japanese domestic pill to treat COVID-19, third to be regulatorally approved in Japan; in February 2022

・At both doses, the S-217622 arms showed a significant difference on day 4 (after the 3rd dose), in comparison to the placebo arm, with respect to each of the following:

→The proportion of subjects with positive viral titer, which was below 10% in the S-217622 treated arms, and decreased to a greater degree than seen in the Phase 2a part, 1 in comparison with the placebo arm

・Of the 12 symptoms, a significant improvement effect in the total score of respiratory symptoms (stuffy or runny nose, sore throat, cough, shortness of breath), highly characteristic symptoms in the population enrolled in this study, was observed at both doses

・TEAE and treatment-related TEAE were consistent with those observed in the Phase 2a part, and no new adverse events of concern were observed at the time of this analysis

Xocova (ensitrelvir) is an oral antiviral drug for the treatment of COVID-19 infection caused by the new coronavirus SARS-CoV-2. SARS-CoV-2, being an enveloped positive-sense (+) RNA virus, enters host cells by binding its S protein to angiotensin-converting enzyme 2 (ACE2) on the cells and then releasing genomic RNA (gRNA) into the cytoplasm after uncoating. The cell’s ribosomes then translate the gRNA into the two major polyproteins, pp1a and pp1ab. Proteases embedded in viral nonstructural proteins 3 (Nsp3) and 5 (Nsp5), papain-like protease (PLpro) and chymotrypsin-like protease (3CLpro), respectively, cleave pp1a and pp1ab into 16 nonstructural proteins that assemble into replication–transcription complexes (RTCs). The latter produce new gRNAs and a set of subgenomic RNAs (sgRNAs) including open reading frames (ORFs) that encode structural viral proteins such as S protein, membrane (M), envelope (E), and nucleocapsid (N) proteins, as well as a number of accessory proteins. The newly created gRNAs are translated to produce additional nonstructural proteins, serve as a template for further RNA synthesis, or are packaged into new virions.

It is 3C-like protease inhibitor for the treatment of COVID-19 infection. It is taken by mouth, and has been successfully tested against the recently emerged Omicron variant

The nsp5 gene, which encodes Mpro, a target for S-217622, is largely conserved between each of these VOCs and VOIs, unlike the S gene, which encodes the viral spike protein. As a result of changes in the viral spike protein, S-217622 had antiviral effects against all VOCs, whereas neutralizing antibodies displayed varied reactivities to different VOCs. In Vero-TMPRSS2 cells infected with the SARS-CoV-2 Omicron variant, S-217622 retained exceptional antiviral effectiveness.

S-217622, a therapeutic drug for COVID-19, is a 3CL protease inhibitor created through joint research between Hokkaido University and Shionogi. SARS-CoV-2 has an enzyme called 3CL protease, which is essential for the replication of the virus. S-217622 suppresses the replication of SARS-CoV-2 by selectively inhibiting 3CL protease. Shionogi has already been submitting the non-clinical, manufacturing/CMC data, and clinical trial data obtained so far to the PMDA. Currently the Phase 3 part of a Phase 2/3 clinical trial in patients with mild/moderate symptoms and the Phase 2b/3 part in patients with asymptomatic/only mild symptoms are in progress.

The viral spike protein, which develops amino acid changes across SARS-CoV-2 variants, is the target of current vaccines and monoclonal antibody treatments. Comparatively, viral Mpro is less diverse, thereby demonstrating that the susceptibility of SARS-CoV-2 VOCs to S-217622 is likely comparable.

Taken together, the SARS-CoV-2 Mpro is a promising target for antiviral therapies. Furthermore, the findings from the current study demonstrate that S-217622 has a unique potential in treating COVID-19.

Shionogi & Company, Limited is a Japanese pharmaceutical company best known for developing Crestor. Medical supply and brand name also uses Shionogi. Shionogi has business roots that date back to 1878, and was incorporated in 1919.

In Japan it is particularly known as a producer of antimicrobial and antibiotics. Because of antibiotic resistance and slow growth of the antibiotic market, it has teamed up with US based Schering-Plough (merged in 2009 with Merck & Co) to become a sole marketing agent for its products in Japan.

Shionogi had supported the initial formation of Ranbaxy Pharmaceuticals, a generic manufacturer based in India. In 2012 the company became a partial owner of ViiV Healthcare, a pharmaceutical company specialising in the development of therapies for HIV.

In Brazil, Evonik has established an Applied Technology Center.