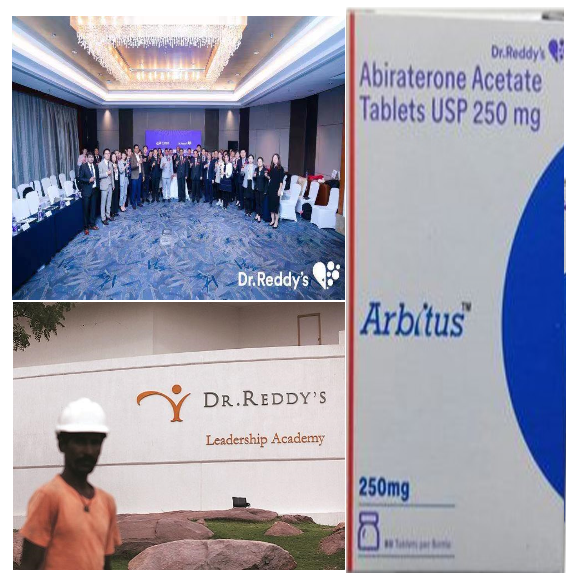 Dr. Reddy`s has launched the first anti-cancer drug in china.

Abiraterone Acetate, which was launched in the US in 2020, is used in treating prostate cancer.

“Some good news this week – a breakthrough for the Indian pharmaceutical industry in China as Abiraterone by Dr. Reddy’s becomes the first anti-cancer drug from India to enter the Chinese market,” Misri tweeted.

Abiraterone Acetate is a significant launch for the company, as the Zytiga brand and generic market had US sales of approximately $454 million for the most recent twelve months ending in March 2020 according to IQVIA Health.

Abiraterone acetate was described in 1995, and approved for medical use in the United States and Europe in 2011. It is on the World Health Organization’s List of Essential Medicines, the safest and most effective medicines needed in a health system. The medication is marketed widely throughout the world.

What is Abiraterone Acetate?

Abiraterone is an orally active inhibitor of the steroidal enzyme CYP17A1 (17 alpha-hydroxylase/C17,20 lyase). It inhibits CYP17A1 in a selective and irreversible manner via covalent binding mechanism.

Abiraterone acetate, also known as 17-(3-pyridinyl)androsta-5,16-dien-3β-ol acetate, is a synthetic androstane steroid and a derivative of androstadienol (androsta-5,16-dien-3β-ol), an endogenous androstane pheromone. It is specifically a derivative of androstadienol with a pyridine ring attached at the C17 position and an acetate ester attached to the C3β hydroxyl group. Abiraterone acetate is the C3β acetate ester of abiraterone.

What are the Medical Uses?

Abiraterone acetate is used in combination with prednisone, a corticosteroid, as a treatment for mCRPC (previously called hormone-resistant or hormone-refractory prostate cancer). This is a form of prostate cancer that is not responding to first-line androgen deprivation therapy or treatment with androgen receptor antagonists. Abiraterone acetate has received Food and Drug Administration (FDA) (28 April 2011), European Medicines Agency (EMA) (23 September 2011), Medicines and Healthcare products Regulatory Agency (MHRA) (5 September 2011) and Therapeutic Goods Administration (TGA) (1 March 2012) approval for this indication. In Australia it is covered by the Pharmaceutical Benefits Scheme when being used to treat castration-resistant prostate cancer and given in combination with prednisone/prednisolone (subject to the conditions that the patient is not currently receiving chemotherapy, is either resistant or intolerant of docetaxel, has a WHO performance status of <2, and his disease has not since become progressive since treatment with PBS-subsidised Abiraterone acetate has commenced).

Abiraterone acetate may be useful for the prevention of the testosterone flare at the initiation of GnRH agonist therapy in men with prostate cancer.

In people previously treated with Docetaxel, survival is increased by 3.9 months (14.8 months versus 10.9 months for placebo).In people with castration-refractory prostate cancer but who had not received chemotherapy those who received Abiraterone acetate had progression-free survival of 16.5 months rather than 8.3 months with placebo. After a median follow-up period of 22.2 months, overall survival was better with Abiraterone acetate.

How effective is Albiratone acetate?

Abiraterone, the active metabolite of Abiraterone acetate, inhibits CYP17A1, which manifests as two enzymes, 17α-hydroxylase (IC50 = 2.5 nM) and 17,20-lyase (IC50 = 15 nM) (approximately 6-fold more selective for inhibition of 17α-hydroxylase over 17,20-lyase) that are expressed in testicular, adrenal, and prostatic tumor tissues. CYP17A1 catalyzes two sequential reactions: (a) the conversion of pregnenolone and progesterone to their 17α-hydroxy derivatives by its 17α-hydroxylase activity, and (b) the subsequent formation of dehydroepiandrosterone (DHEA) and androstenedione, respectively, by its 17,20-lyase activity. DHEA and androstenedione are androgens and precursors of testosterone. Inhibition of CYP17A1 activity by Abiraterone acetate thus decreases circulating levels of androgens such as DHEA, testosterone, and dihydrotestosterone (DHT). Abiraterone acetate, via Abiraterone, has the capacity to lower circulating testosterone levels to less than 1 ng/dL (i.e., undetectable) when added to castration. These concentrations are considerably lower than those achieved by castration alone (~20 ng/dL).The addition of Abiraterone acetate to castration was found to reduce levels of DHT by 85%, DHEA by 97 to 98%, and androstenedione by 77 to 78% relative to castration alone. In accordance with its antiandrogenic action, Abiraterone acetate decreases the weights of the prostate gland, seminal vesicles, and testes.

Abiraterone also acts as a partial antagonist of the androgen receptor (AR), and as an inhibitor of the enzymes 3β-hydroxysteroid dehydrogenase (3β-HSD), CYP11B1 (steroid 11β-hydroxylase), CYP21A2 (Steroid 21-hydroxylase), and other CYP450s (e.g., CYP1A2, CYP2C9, and CYP3A4).] In addition to Abiraterone itself, part of the activity of the drug has been found to be due to a more potent active metabolite, δ4-abiraterone (D4A), which is formed from Abiraterone by 3β-HSD. D4A is an inhibitor of CYP17A1, 3β-hydroxysteroid dehydrogenase/Δ5-4 isomerase, and 5α-reductase, and has also been found to act as a competitive antagonist of the AR reportedly comparable to the potent antagonist enzalutamide. However, the initial 5α-reduced metabolite of D4A, 3-keto-5α-abiraterone, is an agonist of the AR, and promotes prostate cancer progression. Its formation can be blocked by the coadministration of dutasteride, a potent and selective 5α-reductase inhibitor.

Abiraterone acetate, along with galeterone, has been identified as an inhibitor of sulfotransferases (SULT2A1, SULT2B1b, SULT1E1), which are involved in the sulfation of DHEA and other endogenous steroids and compounds, with Ki values in the sub-micromolar range.

After oral administration, Abiraterone acetate, the prodrug form in the commercial preparation, is converted into the active form, Abiraterone. This conversion is likely to be esterase-mediated and not CYP-mediated. Administration with food increases absorption of the drug and thus has the potential to result in increased and highly variable exposures; the drug should be consumed on an empty stomach at least one hour before or two hours after food. The drug is highly protein bound (>99%), and is metabolised in the liver by CYP3A4 and SULT2A1 to inactive metabolites. The drug is excreted in feces (~88%) and urine (~5%), and has a terminal half-life of 12 ± 5 hours.

Dr. Reddy’s API business thrives on the deep technical strengths established over the last 30+ years in the development and manufacture of complex APIs such as steroids, peptides, complex long chain molecules and highly potent APIs (HPAPIs / oncology drugs). This expertise is complemented by our prowess in intellectual property and regulatory affairs which helps us consistently meet and exceed regulatory standards. Dr. Reddy’s Abiraterone Acetate API is the outcome of the extensive expertise in R&D, IP, and Regulatory.

DawaaDost announces one day’s Diabetes Course of ‘Metformin 1000 mg’ at only rupee one...