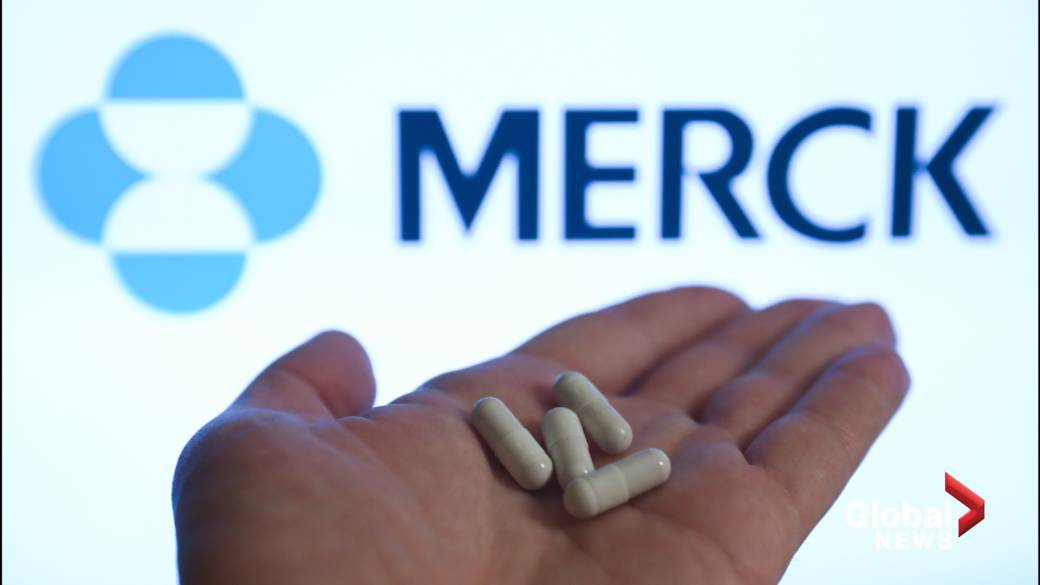 Britain on Thursday became the first country in the world to approve a potentially game-changing COVID-19 antiviral pill jointly developed by U.S.-based Merck & Co Inc  and Ridgeback Biotherapeutics, in a boost to the fight against the pandemic.

Britain’s Medicines and Healthcare products Regulatory Agency (MHRA) recommended the drug, molnupiravir, for use in people with mild to moderate COVID-19 and at least one risk factor for developing severe illness, such as obesity, older age diabetes, and heart disease.

The green light is the first for an oral antiviral treatment for COVID-19 and the first for a COVID-19 drug that will be administered widely in the community. U.S. advisers will meet on Nov. 30 to review the drug’s safety and efficacy data and vote on whether molnupiravir should be authorized. The pill, which will be branded as Lagevrio in Britain, is designed to introduce errors into the genetic code of the coronavirus that causes COVID-19 and is taken twice a day for five days.

Drugs in the same class as molnupiravir have been linked to birth defects in animal studies. Merck, known as MSD outside of the United States and Canada, has said animal testing shows that molnupiravir is safe, but the data have not yet been made public.

Treatments to tackle the pandemic, which has killed more than 5.2 million people worldwide, have so far focused mainly on vaccines. Other options, including Gilead’s infused antiviral remdesivir and generic steroid dexamethasone, are generally only given after a patient has been hospitalised.

Merck’s Molnupiravir has been closely watched since data last month showed it could halve the chances of dying or being hospitalised for those most at risk of developing severe COVID-19 when given early in the illness. read more

Professor Stephen Powis, national medical director for the National Health Service (NHS) in England, said the drug would be administered to patients at higher risk of complications as Britain heads into one of the most challenging winters ever.

A wider rollout will follow if it is clinically and cost effective in reducing hospitalisations and death, he added.

“We are now working across government and the NHS to urgently get this treatment to patients initially through a national study so we can collect more data on how antivirals work in a mostly vaccinated population,” UK vaccines minister Maggie Throup told parliament.

Pressure on the country:

The speedy approval in Britain, which was also the first Western country to approve a COVID-19 vaccine, comes as it struggles to tame soaring infections.

Britain has about 40,000 daily cases of COVID-19, according to the latest seven-day average. That is second only to the roughly 74,000 a day in the United States, which has five times more people, and has fuelled criticism of the government’s decision to abandon most pandemic-related restrictions

Data released on Wednesday night showed COVID-19 prevalence in England hit its highest level on record last month, led by a high number of cases in children and a surge in the south-west of the country.

Pressure is growing on the government to implement its “Plan B” aimed at protecting the NHS from unsustainable demands, involving mask mandates, vaccine passes and work-from-home orders.

Many other big economies, including Germany, France and Israel, have either retained some basic COVID-19 measures like mask mandates or reintroduced them in response to rising cases.

The UK government has said its focus remains on administering vaccine boosters and inoculating 12- to 15-year-olds.

“With no compromises on quality, safety and effectiveness, the public can trust that the MHRA has conducted a robust and thorough assessment of the data (on molnupiravir),” MHRA chief June Raine said in a statement.

Last month, Britain agreed a deal with Merck to secure 480,000 courses of molnupiravir.

Professor Penny Ward, an independent pharmaceutical physician, welcomed the approval, but said the NHS needed to outline its plans for rollout and cautioned that supplies were likely to be tight given the strong global demand.

“Comments made by Mr Javid today suggest that it may be made available via a clinical trial, presumably to investigate its effectiveness in vaccinated patients with breakthrough infections, as the original study incorporated unvaccinated adults,” she said.

If given to everyone becoming unwell, the nearly half a million courses would not last very long given the more than 40,000 current daily case rate, she said.

In a separate statement, Merck said it expected to produce 10 million courses of the treatment by the end of this year, with at least 20 million set to be manufactured in 2022.

Pfizer  and Roche are also racing to develop easy-to-administer antiviral pills for COVID-19.

Both Merck and Pfizer are studying their drugs in late-stage trials for preventing coronavirus infection.

Viral sequencing done so far has shown molnupiravir is effective against all variants of the coronavirus, Merck has said, including the more-infectious Delta, which is responsible for the worldwide surge in hospitalisations and deaths recently.

While it is not yet clear when Merck will deliver doses to Britain, the company has said it is committed to providing timely access to its drug globally with plans for tiered pricing aligned with a country’s ability to pay.

Merck has licensed the drug to generic drugmakers for supply to low-income countries.

Antibody cocktails like those from Regeneron and Eli Lilly  have also been approved for non-hospitalised COVID-19 patients, but have to be given intravenously.

Molnupiravir can swap between two forms (tautomers), one of which mimics cytidine (C) and the other of which mimics uridine (U). When the viral RNA polymerase attempts to copy RNA containing Molnupiravir, it sometimes interprets it as C and sometimes as U. This causes a massive number of mutations in all downstream viral copies that exceed the threshold the virus can survive, an effect called viral error catastrophe or lethal mutagenesis.

How to use Molnupiravir?

Molnupiravir will be able to be taken orally by patients at home after they receive a prescription from their doctor. A course of treatment will be eight 200 milligram capsules a day for five days; four capsules in the morning and four capsules in the afternoon. A patient can choose whether they want to take the medicine with or without food, as it doesn’t appear to affect the medicine in the body.

It’s unclear whether a positive COVID test will be required before a prescription can be issued. This is something that will be decided by the TGA.

The importance of Molnupiravir by Mercks.

Merck (NYSE: MRK), known as MSD outside the United States and Canada, and Ridgeback Biotherapeutics today announced that Molnupiravir (MK-4482, EIDD-2801), an investigational oral antiviral medicine, significantly reduced the risk of hospitalization or death at a planned interim analysis of Phase 3 MOVe-OUT trial in at-risk, non-hospitalized adult patients with mild-to-moderate COVID-19. At the interim analysis, Molnupiravir reduced the risk of hospitalization or death by approximately 50%; 7.3% of patients who received Molnupiravir were either hospitalized or died through Day 29 following randomization (28/385), compared with 14.1% of placebo-treated patients (53/377); p=0.0012. Through Day 29, no deaths were reported in patients who received Molnupiravir, as compared to 8 deaths in patients who received placebo. At the recommendation of an independent Data Monitoring Committee and in consultation with the U.S. Food and Drug Administration (FDA), recruitment into the study is being stopped early due to these positive results. Merck plans to submit an application for Emergency Use Authorization (EUA) to the U.S. FDA as soon as possible based on these findings and plans to submit marketing applications to other regulatory bodies worldwide.

“More tools and treatments are urgently needed to fight the COVID-19 pandemic, which has become a leading cause of death and continues to profoundly affect patients, families, and societies and strain health care systems all around the world. With these compelling results, we are optimistic that Molnupiravir can become an important medicine as part of the global effort to fight the pandemic and will add to Merck’s unique legacy of bringing forward breakthroughs in infectious diseases when they are needed most. Consistent with Merck’s unwavering commitment to save and improve lives, we will continue to work with regulatory agencies on our applications and do everything we can to bring Molnupiravir to patients as quickly as possible,” said Robert M. Davis, chief executive officer and president, Merck. “On behalf of all of us at Merck, I thank our network of clinical investigators and patients for their essential contributions to the development of Molnupiravir”

“With the virus continuing to circulate widely, and because therapeutic options currently available are infused and/or require access to a healthcare facility, antiviral treatments that can be taken at home to keep people with COVID-19 out of the hospital are critically needed,” said Wendy Holman, chief executive officer of Ridgeback Biotherapeutics. “We are very encouraged by the results from the interim analysis and hope Molnupiravir if authorized for use, can make a profound impact in controlling the pandemic. Our partnership with Merck is critical to ensuring rapid global access if this medicine is approved, and we appreciate the collaborative effort to reach this important stage of development.”

For more information – Sign in Websites for Agrochemical & Pharmaceutical Databases:

Grão Direto Collaborates With Bayer to Expand the Reach And Impact of Sustainable Practices in Grain Trading.