“Now for the first time, patients in Europe have the ability to rapidly reduce testosterone without hormonal flare in a convenient oral form,” said Juan Camilo Arjona Ferreira, Chief Medical Officer of Myovant Sciences, Inc. “This approval provides a valuable new treatment option for men with advanced hormone-sensitive prostate cancer in Europe and has the potential to change the standard of care over time.”

“We’ve made significant progress in securing a business partner for the commercialization of ORGOVYX® in Europe. We’ve had interest from multiple parties and anticipate an announcement in the upcoming weeks, in advance of the anticipated launches in European markets,” said David Marek, Chief Executive Officer, Myovant Sciences, Inc.

Orgovyx (relugolix) is a GnRH receptor antagonist that blocks the pituitary gland from making certain hormones.

Relugolix, sold under the brand names Orgovyx and Relumina and as one component of Myfembree, is a gonadotropin-releasing hormone antagonist medication which is used in the treatment of prostate cancer in men and uterine fibroids in women. It is also under development for use in the treatment of endometriosis 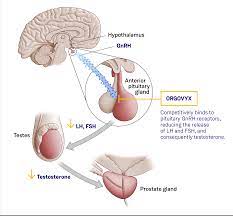 Adverse effects associated with the use of Orgovyx may include, but are not limited to, the following:

This approval was supported by data from the Phase 3 HERO study, a randomized, open-label, parallel-group, multinational clinical study designed to evaluate the safety and efficacy of relugolix. The study compared relugolix to leuprolide in over 1,000 men with androgen-sensitive advanced prostate cancer who required at least one year of continuous androgen deprivation therapy. ORGOVYX® received U.S. Food and Drug Administration (FDA) approval for the treatment of adult patients with advanced prostate cancer in December 2020.

Prostate cancer is a leading cause of death in the European Union with about 65,200 men having died from the disease in 2016. The standardized death rate from prostate cancer stood at 38 deaths per 100,000 male inhabitants according to Eurostat.

Prostate cancer is considered advanced when it has spread or come back after initial treatment and may include biochemical recurrence (rising prostate-specific antigen in the absence of metastatic disease on imaging), locally advanced disease, or metastatic disease. Front-line medical therapy for advanced prostate cancer typically involves androgen deprivation therapy, which reduces testosterone to very low levels, commonly referred to as castrate levels (< 50 ng/dL). Luteinizing hormone-releasing hormone (LHRH) receptor agonists, such as leuprolide acetate, are depot injections and the current standard of care for androgen deprivation therapy. However, LHRH receptor agonists may be associated with mechanism- of-action limitations, including the potentially detrimental initial surge in testosterone levels that can exacerbate clinical symptoms, which is known as clinical or hormonal flare, and delayed testosterone recovery after the drug is discontinued.

Myovant Sciences is a healthcare company focused on redefining care through differentiated solutions in high unmet need areas within women’s health and hormone-sensitive oncology. Founded in 2016, Myovant has executed five successful Phase 3 clinical trials across oncology and women’s health leading to two regulatory approvals by the U.S. Food and Drug Administration (FDA) for men with advanced prostate cancer and women with heavy menstrual bleeding associated with uterine fibroids, respectively. The company also has received regulatory approvals by the European Commission (EC) for women with symptomatic uterine fibroids and for men with advanced hormone-sensitive prostate cancer. The company has a supplemental New Drug Application in endometriosis-associated pain pending with the U.S. FDA. Myovant also is conducting a Phase 3 study to evaluate the prevention of pregnancy in women with uterine fibroids or endometriosis.Myovant also is developing MVT-602, an investigational oligopeptide kisspeptin-1 receptor agonist, which has completed a Phase 2a study for female infertility as part of assisted reproduction. Sumitovant Biopharma, Ltd., a wholly owned subsidiary of Sumitomo Pharma Co., Ltd., is Myovant’s majority shareholder.